Fears of an upcoming recession are weighing heavily on chemical stock prices, sending P/E (price/earnings) ratios for commodity names down to single digits based on Wall Street’s estimated 2020 earnings.

The escalation of the US-China trade war, with the US ready to slap on a new round of tariffs on Chinese imports starting on 1 September, has sent US bond yields sharply lower.

The brief inversion of 10-year and two-year US Treasury yields on 13 August, where the yield on the longer dated government debt dipped lower than the short-term yield – a historical harbinger of recessions – stoked fear and triggered a rout in global equity markets.

While many explanations have come out on why it is different this time (piles of foreign government bonds have much lower and even negative yields), the inversion of the 10-year and two-year US Treasury yields should not be ignored as it has preceded each of the last five US recessions.

It does not mean a recession is imminent, as it can take 1-2 years for a severe downturn to take place.

However, the industrial economy is arguably already in recession, underlined by major declines in Q2 earnings and weak guidance for companies in cyclically sensitive sectors such as chemicals. For the chemical sector, hopes for a second-half recovery have been dashed.

Again, the challenging outlook should come as no surprise to those tracking the key global manufacturing purchasing managers’ indexes (PMIs).

China and European manufacturing activity have been in contraction territory (below 50) with the Eurozone showing a particular sharp decline, while the US has been losing momentum fast.

The latest reading for the ISM US Manufacturing PMI was 51.2 for July, marking the fourth consecutive month of decline and the weakest level in almost two years.

“While tariffs, trade disputes and currency devaluations have caused some analyst and pundits to pause, the yield curve and the [US] PMI index for manufacturing are also sending ominous signals, with the latter hovering near or below 50,” said Duane Dickson, vice chairman and US oil, gas and chemicals leader for consultancy Deloitte. While the US Manufacturing PMI has always dropped below the 50 level before a recession, a recession has not occurred every time, he noted. The US Manufacturing PMI was below 50 as late as February 2016 and subsequently bounced back. 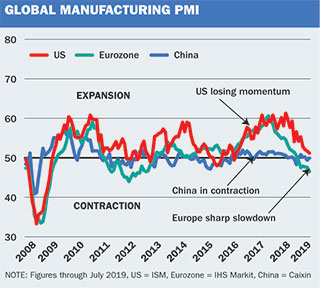 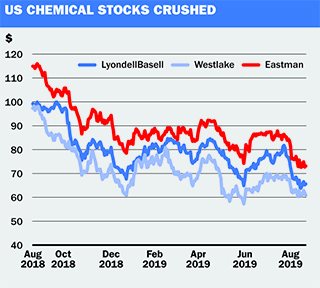 “We fear that the RMB’s fall below 7 to the US dollar on 5 August will act as… a catalyst – this time, for the onset of a global debt crisis, which has long been in the category of ‘an accident waiting to happen’,” said Hodges in a special International eChem pH report.

The falling Chinese yuan and rising US dollar is putting the squeeze on big Chinese property developers that borrowed in dollars, making it increasingly difficult to pay down US dollar denominated debt. A major default could have ripple effects, he noted.

“China’s devaluation also makes it likely that it will start to export deflation, with July’s PPI (Producer Price Index) already falling to -0.3%, and increases concerns over the likely effectiveness of central bank policy,” said Hodges. A stronger dollar makes US exports – from chemical and polymers to finished product – less competitive in global markets.

The US slapping additional tariffs on China as the latter “struggles to deal with very severe domestic economic problems carries major risks,” said ICIS senior consultant John Richardson in the .

“Unless the US changes its approach, I see a global recession as almost inevitable,” said Richardson. “The severity of a recession would depend on the ability of politicians and central bankers to work together, as they did so effectively in 2008. In the current febrile climate, this kind of cooperation seems very unlikely,” he added.

Meanwhile, chemical stock prices have slid to fresh 52-week as well as multi-year lows, especially for the commodity group. 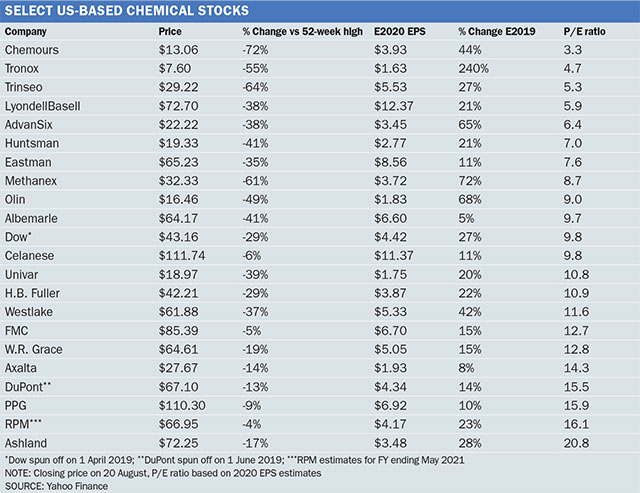 “Kicking off on the general macro backdrop with some parts of the world exhibiting the characteristics of a recession, Bob noted that while consumer end-markets (about two-thirds of LyondellBasell’s exposure) appear to be ‘hanging in there’, durables have notably slowed as consumers have held off on big purchases beginning in Q4 2018, most predominately felt in auto,” said Mitsch.

The resilience of the US consumer was underscored by solid Q2 earnings beats by US-based retailers Target on 21 August and Home Depot on 20 August.

Meanwhile, in China, Patel noted visibility is very poor on the demand side, said Mitsch. Yet Patel is confident polyethylene (PE) prices will not “fall off a cliff” and believes margins can remain attractive despite capacity additions, reported the analyst.

Mitsch expects LyondellBasell at its upcoming 24 September investor meeting to highlight the dual themes of higher earnings before interest, tax, depreciation and amortisation (EBITDA) and lower capital spending, resulting in higher free cash flow for investors. There is an argument that chemical stock prices have fallen too far with so many P/E multiples in the single digits based on estimated 2020 earnings per share.

“Current TiO2 prices are slightly above their 15-year averages and 2008/2009 distress period-levels, highlighting their upside potential, in our view,” said Ahmed. Demand in 2019 has picked up with destocking having run its course while producer inventories have also normalised, he added.

“We anticipate global utilisation rates normalising in 2019 and exceeding tightness levels of 90% by 2020/2021,” said Ahmed.

“We believe Tronox is the best name by which to play the TiO2 cycle, as it benefits not only from higher TiO2 prices but also from positively inflecting ore prices,” he added.

However, the fact that Wall Street analysts expect chemical industry profits in 2020 to rise well into the double-digits percentage-wise, seems out of tune with the challenging macro outlook, barring a US-China trade deal.

Wall Street analysts have taken the axe to 2019 EPS estimates through the year, but have been slow to adjust 2020 projections, leading to the wide gap.

While central banks around the world are lowering rates with some offering additional stimulus, it is unclear they are being aggressive enough to reverse the global economic slowdown. Likely we’ll see additional cuts to 2020 EPS estimates in the chemical sector as this year progresses without a US-China trade deal.

“The contraction of industrial activity in Europe, further pressure on auto sales in China, and slowing capital equipment orders in the US all suggest weaker industrial confidence this fall and consequently extended winter shutdowns and a stall in activity until after the Lunar New Year on 25 January,” said Alexander.

For the key automotive sector, the analyst sees softness likely spilling into the first half of 2020 given upcoming CO2 regulations in Europe and long lags on China stimulus.