LONDON (ICIS)–Manufacturing in the eurozone finished the third quarter in a deep contraction as both output and new orders fell, with entrepreneurs across the 19-country currency union bracing for more hardship ahead. 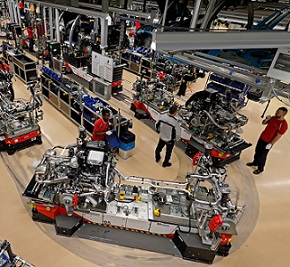 The Purchasing Manager’s Index (PMI) for manufacturing compiled by IHS Markit for September reached a seven-year low not seen since the height of the sovereign debt crisis in the 19-country currency area.

On average, the PMI for September stood at 45.7 points, sharply down from 47.0 points in August. Still, any figures below the 50.0 points indicates that actually economy activity is contracting.

Analysts at IHS Markit, which compiles the PMI manufacturing index, added that the industrial downturn was so severe that there was a risk that job destruction and pessimistic prospects would spread to the dominant services sector, around 80% of economic output.

Manufacturing in the eurozone accounts for between 10% and 20% of GDP, depending on country.

Germany’s export-oriented industry continues to be the hardest hit by geopolitical woes, with September’s reading as low as 41.7 points, a 123-month or 10-year low.

Only three countries out of the eight measured posted positive readings – Greece, the Netherlands and France – while Ireland, Italy, Spain, Austria and Germany all posted falls.

The sharp fall in September – dashing away hopes among chemicals executives that the final quarter could bring some sort of recovery – was due to decreases in all measures: output, new orders and purchasing, which would not bode well for employment or expectations ahead.

“Signs of excess capacity persisted with backlogs being cut at a considerable rate. This in turn placed pressure on payroll numbers, with the latest data showing a fifth successive monthly reduction in employment. Moreover, the degree to which jobs were cut was also the sharpest since April 2013,” said Markit.

In line with inflation figures for September published earlier on Tuesday, producer prices also fell across the eurozone as demand faltered, not being offset by any supply-side constraint.

“Average purchase prices continued to fall. That extended the current period of deflation to four months and the degree to which prices declined was also the joint-sharpest recorded since April 2016,” said Markit.

“Manufacturers were subsequently able to reduce their own charges for a third successive month, and at a slightly faster rate.”

The picture for the rest of the year is far from positive, either. With the eurozone’s more pressing geopolitical problems still unresolved – Brexit and the US-China trade war – the fourth quarter could be a bumpy period.

“There’s likely worse to come, with forward-looking indicators (such as the orders to-inventory ratio) deteriorating further during the month. Businesses also remain downbeat about the year ahead,” said Markit’s chief economist Chris Williamson.

“Adding to the gloom, jobs are now being cut at the fastest rate since early 2013, which is not only a sign of manufacturers bracing themselves for more trouble ahead, but also adds to the risk that a deteriorating labour market will hit households and the service sector.”

Aiming to avoid an even deeper downturn, the eurozone’s European Central Bank (ECB) unleashed a series of economic stimulus in September, including bond-buying to increase liquidity in the eurosystem or reduce even further interest rates in order to prop up lending to households and businesses.

Pictured: A Porsche factory in Stuttgart, Germany; the downturn in the automobile industry has hit the country hard
Picture source: Ronald Wittek/EPA-EFE/Shutterstock