NEW YORK (ICIS)–Swirling global developments are clouding the outlook for chemicals – from the US-Iran tensions and impact on crude oil, to an imminent phase 1 US-China trade deal, and weaker manufacturing data across the board for the US, Europe and China.

Top of mind is the escalation of conflict after the US targeted killing of Iran’s top general Qasem Soleimani on 3 January. Since then, Brent crude oil prices are up by about 3% to around $68/bbl as of 6 January on concerns on disruptions from Iranian retaliation, after being up by over 5% higher earlier in the day.

Global crude oil dynamics have clearly changed with the surge in US shale oil and gas production. A decade ago, a potential conflict between the US and Iran would have seen at least a double-digit percentage spike in oil prices.

“The increase has been well within normal ranges so far. After the drone attack on the Saudis, and oil prices jumping $8/bbl for a short time before returning to normal, investors may be more cautious [on betting on a sustained rally],” said James Ray, vice president of consulting – Americas for ICIS.

“Considering the continued stock build of liquid fuels, and that the drivers of oil prices have shifted to more of a marginal producer mechanism, prices are likely to be more stable and less subject to sentiment driven spikes,” he added.

“Oil markets will continue to feel the impact of the attack for the short and medium term, as Iran will likely seek to take retaliatory action. The primary concern is over oil supply from the region – Iran has previously threatened to cut off access to the Strait of Hormuz, where over 20% of global petroleum liquids pass through,” said ICIS senior analyst Ajay Parmar.

“Reduced access to the Strait will remove significant quantities of crude oil from world markets. The response from Iran will likely bring further instability to the Middle East. If conflict spreads to neighbouring countries (such as Iraq which produces around 4.7m bbl/day of crude oil), the potential threat to oil supply is even greater,” he added.

Downstream from oil, Iran cutting off the Strait of Hormuz would also directly hit exports of chemicals and polymers from the Middle East.

Around 4.7m tonnes of linear low density polyethylene (LLDPE) are projected to be exported through the strait in 2020 – representing 51% of global net exports from net exporting countries, pointed out ICIS senior Asia consultant John Richardson on the ICIS Asian Chemical Connections Blog, using statistics from the ICIS Supply and Demand Database.

For high density PE (HDPE), 4.1m tonnes of projected exports through the strait (38% of global exports) would be at risk along with 3.1m tonnes (68%) of low density PE (LDPE).

Ethylene glycol and methanol exports would also be heavily impacted.

“But the much more important longer-term issue will be the impact on demand if a negotiated settlement [between the US and Iran] cannot be reached. And even if a settlement is reached, 2020 is still going to be a more challenging year as China’s economy continues to decelerate,” said Richardson.

As of 3 January, Northeast Asia LLDPE variable margins using naphtha feedstock were at minus $68/tonne, according to ICIS Petrochemical Analytics. 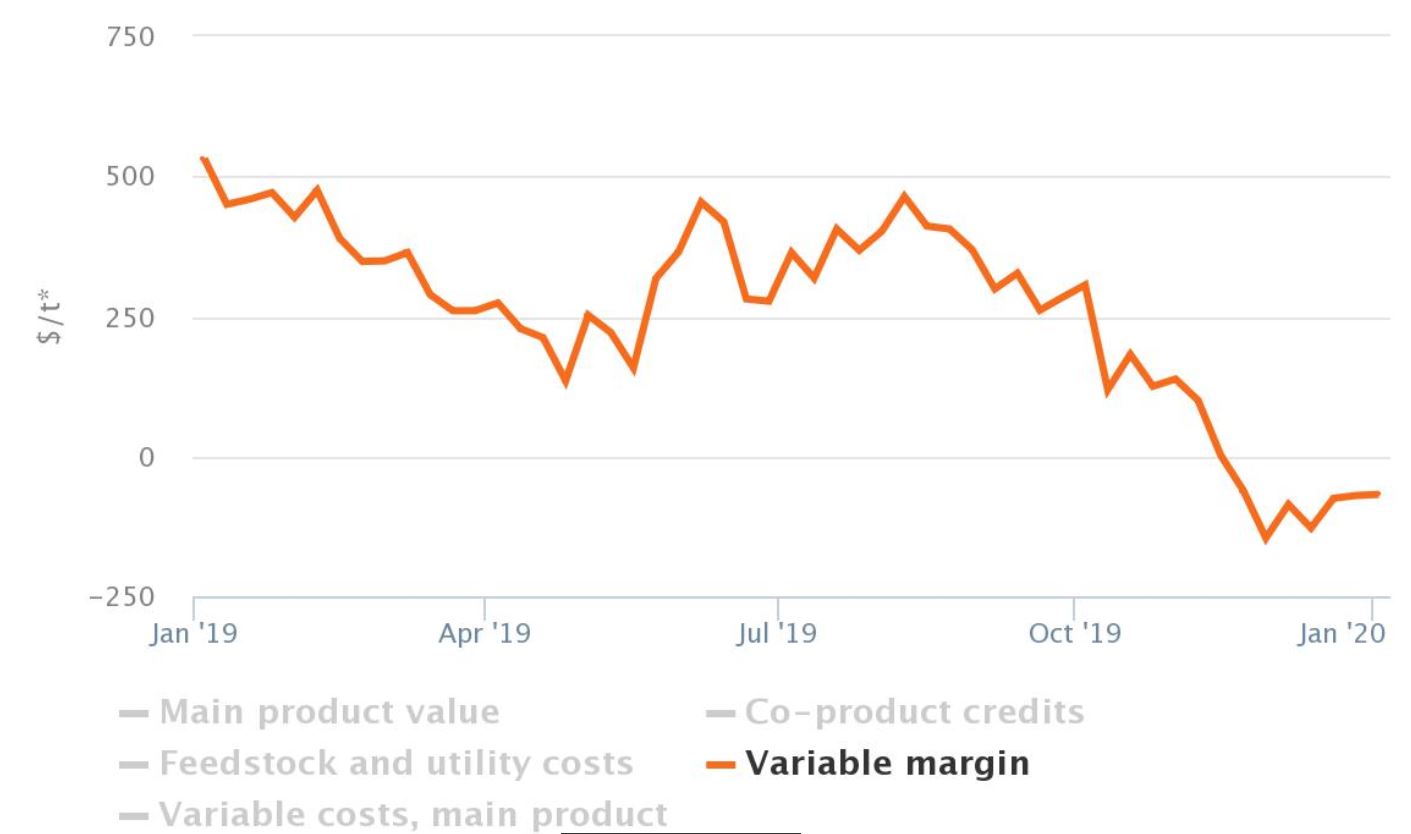 In the absence of demand improvement and pricing power, materially higher crude oil prices would crush European margins and put Asia deeper in the red.

On the other hand, US petrochemical producers using natural gas liquids (NGL) feedstock are insulated from the impact of rising crude oil, and can even benefit if this translates into higher petrochemical and downstream polymer prices.

Yet PE prices have essentially decoupled from crude oil on the upside. Even as oil prices have trended higher since October 2019 from a low of around $58/bbl, Asia PE spot prices actually declined on global oversupply.

The US continues to significantly ramp up PE exports, including to Asia, after an unprecedented investment boom based on cheap shale gas.

From January through October 2019, US exports of all three major grades of PE jumped 45% to 7.9m tonnes, according to the ICIS Supply and Demand Database.

Longer term, the potential for more conflict and tension between the US and Iran could slow down global economic growth. That could lower demand for petrochemicals, offsetting some – if not all – of the benefits of higher oil prices to US producers.

GLOBAL MANUFACTURING DIPS
Materially higher crude oil prices also threatens the global manufacturing sector which has already been reeling from the US-China trade war, although a de-escalation appears at hand.

The latest manufacturing purchasing managers’ Indexes (PMIs) show a weakening picture, surprising many analysts who had been expecting improvement.

The ISM US Manufacturing PMI reading for December actually declined to 47.2 from 48.1 in November, marking the fifth consecutive month of contraction (under the 50 level) and the lowest level since June 2009. 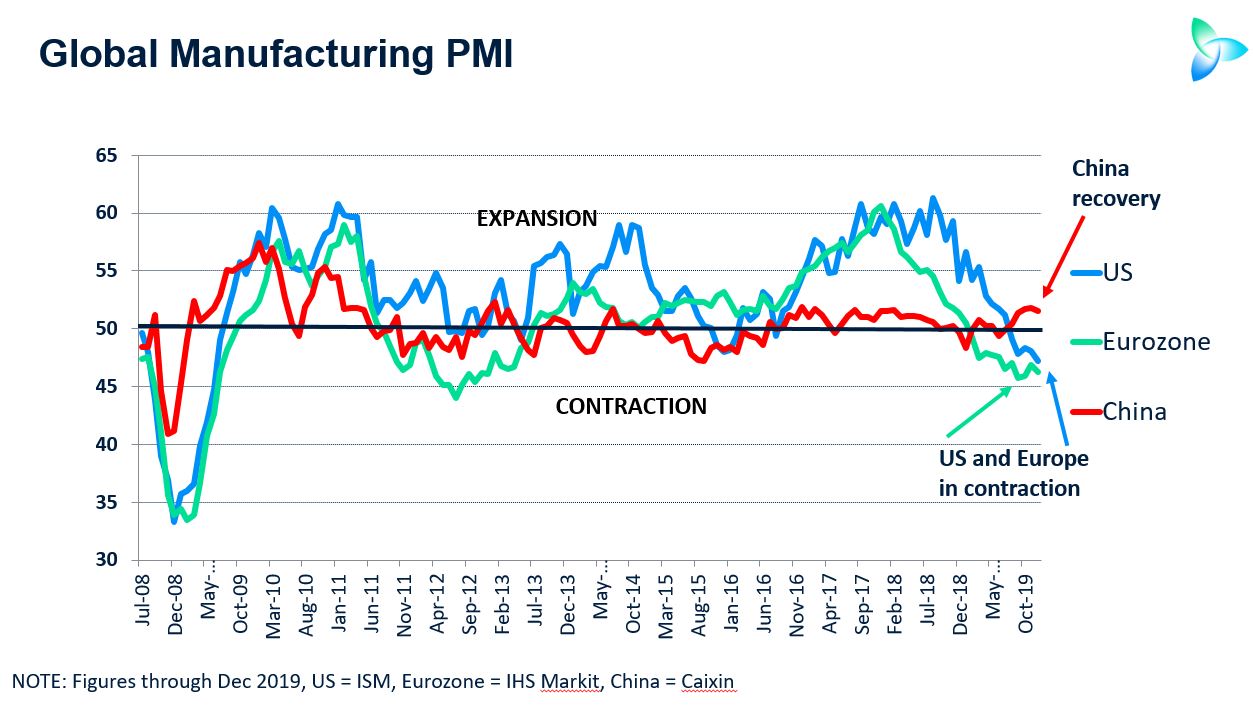 “Global trade remains the most significant cross-industry issue, but there are signs that several industry sectors will improve as a result of the phase 1 trade agreement between the US and China,” said Tim Fiore, chair of the ISM Manufacturing Business Survey Committee.

“The New Export Orders Index contracted for the second month in a row, recording 10 months of poor performance and likely contributing to the faster contraction of the New Orders Index,” he added.

Europe’s manufacturing slump deepened further in December with the IHS Markit Eurozone Manufacturing PMI falling to 46.3 versus 46.9 in November, marking its 11th consecutive month in contraction.

The Caixin China General Manufacturing PMI for December dipped to 51.5 from 51.8 in November as new order growth eased to a three-month low and export sales rose just slightly. While hardly a robust reading, it remained in expansion mode for the 5th consecutive month.

The overall weak global manufacturing PMI readings underscore the depth of the synchronised industrial slowdown. However, a near-term reprieve may finally be at hand.

US-CHINA PHASE 1 DEAL
While a deal isn’t a deal until ink hits paper, the US and China appear on track for a phase 1 trade deal that will avoid additional planned tariffs and also roll back the level of previous tariffs, including on chemicals and finished plastics.

US President Trump tweeted on 31 December that he would sign the phase 1 deal on 15 January.

The US-China phase 1 trade deal struck on 13 December would take the planned 15% tariffs on around $160bn in additional Chinese imports off the table. These tariffs, which were part 2 of the fourth round, were set to go into effect on 15 December, along with China’s 5-10% retaliatory tariffs on US imports, many of which were hikes on existing products already under tariff in the first three rounds.

In addition, the US will cut by half tariffs on around $120bn in Chinese imports that were implemented on 1 September in part 1 of the fourth round of tariffs. These US tariffs will go down to 7.5% from 15%.

China has also indicated it would roll back certain tariffs on US imports but on which products and by what amount is unclear.

Some US commodity chemicals and polymers not under tariff in the first three rounds would have been slapped with new tariffs in the absence of the phase 1 deal.

A signed deal would takes planned China tariffs on US low density PE (LDPE), polyvinyl chloride (PVC), caprolactam, phthalic anhydride (PA) and polycarbonate (PC) off the table. All these products were slated to be hit by 10% tariffs on 15 December, with the exception of PC at 5%.

The US exported around 337,000 tonnes/year of PVC to China in 2018 – one of the top volume commodities in this trade route.

The expectation of a US-China phase 1 trade deal is already baked into the markets but an actual signing of the deal should signal that “peak tariff” is now behind us, taking some uncertainty off the table.

If the world can avoid catastrophe from the US-Iran conflict, this trade war de-escalation could provide a tailwind for global manufacturing activity.

BLOG: Global chemicals: What I believe our industry must do in response to a deep and complex crisis

The new and improved ICIS Homepage