SINGAPORE (ICIS)–Asia’s demand for acrylonitrile butadiene rubber (NBR) has shrunk in the run-up to the Lunar New Year holidays due to slumping downstream automotive sector, with consumption being eroded further by growing production of electric vehicles.

“Demand for NBR has weakened due to the slump in the auto industry which is undergoing a transition to electrification,” a rubber trader said.

The shift to producing more environment-friendly vehicles translates to lesser demand for NBR, which has applications in internal combustion engines.

“The new energy electric vehicles is powered by a lithium ion battery instead of an internal combustion engine, which uses a whole host of auto parts or components [some of which use NBR],” the trader said.

The automotive industry is a major downstream for NBR, which is also used in the industrial, agricultural and footwear industries. 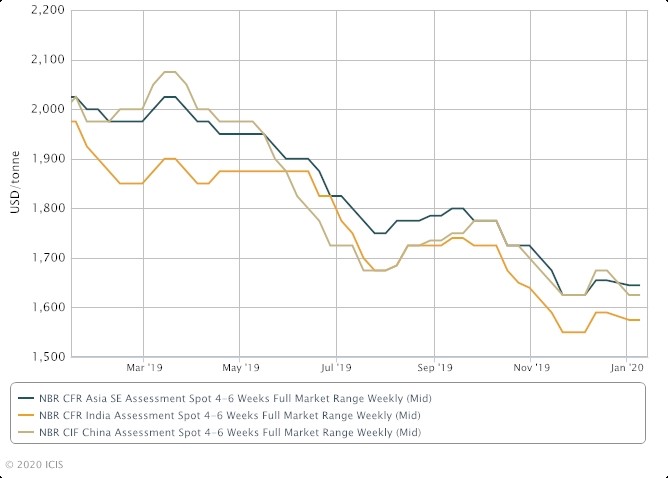 “Shrinking demand is the key reason why spot interest this year in the run-up to the Lunar New Year holiday has dwindled, compared with previous years where restocking usually picks up before the festive holiday,” the trader said.

The Lunar New Year falls on 25 January this year and China is closed for a week from 24 January.

The Lunar New Year is celebrated in both northeast and southeast Asia, including, China, South Korea, Taiwan, Indonesia, Malaysia, Singapore and Vietnam.

The continued slump in the automotive industry in China, the world’s largest auto market, has been weighing on the NBR market in Asia.

It marked the second year of contraction in the country’s overall car market, with steeper falls recorded for both sales and production compared with 2.8% and 3.3%, respectively, in 2018.

China-US trade frictions, tighter emission rules and cuts on subsidies for new-energy vehicles have been weighing on the car market.

In India, demand for NBR has also slowed down due to weakness in its automotive sector.

Two-wheelers accounted for about 75% of total sales, and 77% of total production in December, according to the Society of Indian Automobile Manufacturers (SIAM).