Asia EPDM supply to tighten in Q2 on production cuts

SINGAPORE (ICIS)–Supply of ethylene propylene diene monomer (EPDM) in Asia is expected to be tighter than expected in the second quarter due to production cuts implemented by major producers.

Major producers in the region have been operating their plants at about 70-80% of capacity on hopes of rebalancing the supply-demand fundamentals of the market.

Supply had outstripped demand in the past year due to new capacities that came on stream at a time when demand had shrunk amid the slump in the global automotive sector.

“Producers have been running at lower rates as supply had exceeded demand which had weakened due to the sluggish automotive sector,” a major Asian EPDM maker said.

EPDM is used in the automotive and construction industries for various seals due to its excellent resistance to environmental factors such as ozone, ultraviolet (UV) and general weathering.

“Supply of EPDM from the Middle East was abundant and their lower costs and prices had made the market conditions very difficult for all EPDM makers in Asia,” a trader said.

In the Middle East, the major EPDM producers are Kemya Al Jubail and Petro Rabigh; while in Asia, the major producers include Kumho Polychem, Arlanxeo, Mitsui Chemicals and SK Global. 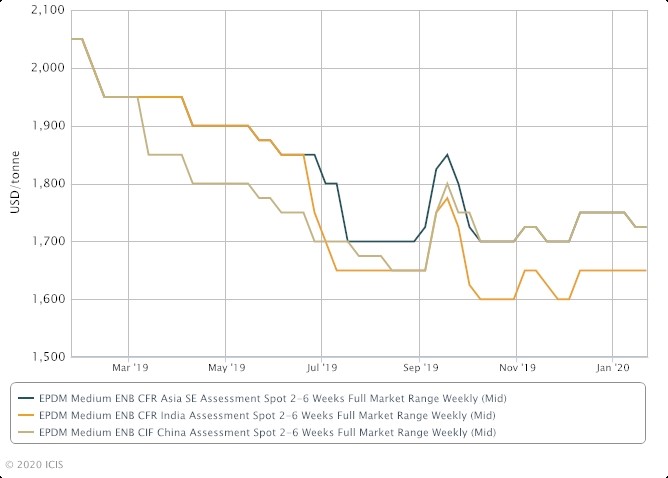 In India, the continued slump in the automotive industry had seen EPDM prices stagnating at $1,650/tonne CFR India since 11 December 2019, ICIS data showed.

Two-wheelers accounted for about 75% of total sales, and 77% of total production in December, according to the Society of Indian Automobile Manufacturers (SIAM).