SINGAPORE: China’s move to phase out single-use plastics has stirred concern among market players about the growth of plastics demand. The regulations might affect as much as 4m tonnes/year of polymer demand.

The new rules prohibit the production and use of disposable and non-biodegradable plastic finished products.

The impact on polyethylene (PE) demand is expected by ICIS to be more than 3m tonnes/year because of the widespread use of the polymer to make shopping bags, courier bags (bags that are sealed on one side), and agricultural film.

ICIS believes that the ban of using non-degradable plastic bags in food delivery and express delivery packages will have a major impact on PE demand. 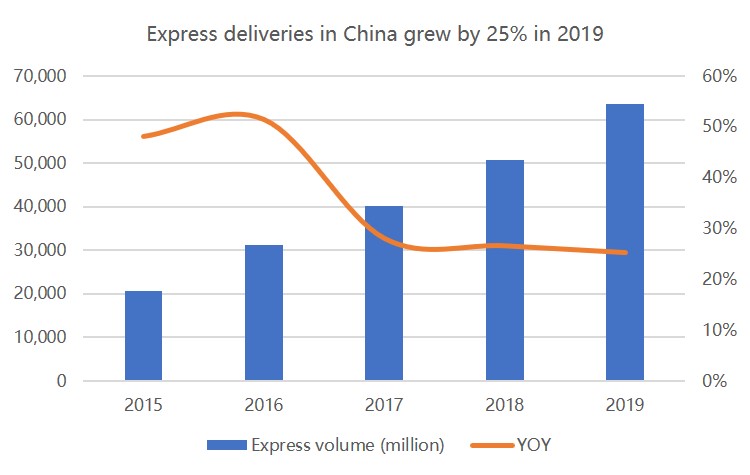 We expect that the ban on using non-degradable plastic packaging bags in postal and express delivery services might have a considerable impact on PE demand.

Taking 2019 statistics as a reference, the missed demand would be around 880,000 tonnes of PE.

Polyethylene is a major feedstock for plastic packaging bags used in express delivery. But PE consumption in this application is hard to calculate as packaging bags are made in various sizes. Detailed rules for different provinces and cities are unknown as yet, which adds to the uncertainty about PE demand.

ICIS analysis assumptions are based on the total number of China’s express deliveries in 2019 of more than 63.5bn.

In 2016, 14.7bn plastic bags were used for express deliveries in China, according to data from the China Post Group and in 2019, the figure is estimated at 30bn PE bags.

Considering the plastic packaging bag with the most common specification of 40cm x 35cm for reference, the corresponding PE consumption in 2019 is estimated around 880,000 tonnes.

The number of express deliveries in six provinces and cities, including Beijing, Shanghai and Jiangsu reached 43.8bn in 2019, accounting for 69% of China’s total.

If the new regulation is implemented across China, around 880,000 tonnes of PE demand may be affected, corresponding to the 2.7% of the total PE demand in China in 2019.

Secondly, non-degradable shopping bags are prohibited from being used in take-away services, shopping malls, supermarkets and marketplaces and the regulation will be implemented in the near future.

ICIS believes that this move might affect 2.2m tonnes of demand, equivalent to 6.7% of the China total in 2019.

According to media data, the annual take-away order volume of plastic bags in China is at least 20bn.

Assuming that a shopping bag weighs about 8.4 grams (g), PE demand from annual take-way orders is no less than 170,000 tonnes.

Around 1bn plastic bags are used in markets per day. And assuming that one plastic bag used in a market weighs 2g, the related PE consumption is expected to total 690,000 tonnes. Plastic bags are also used in shopping malls, supermarkets, pharmacies and elsewhere. 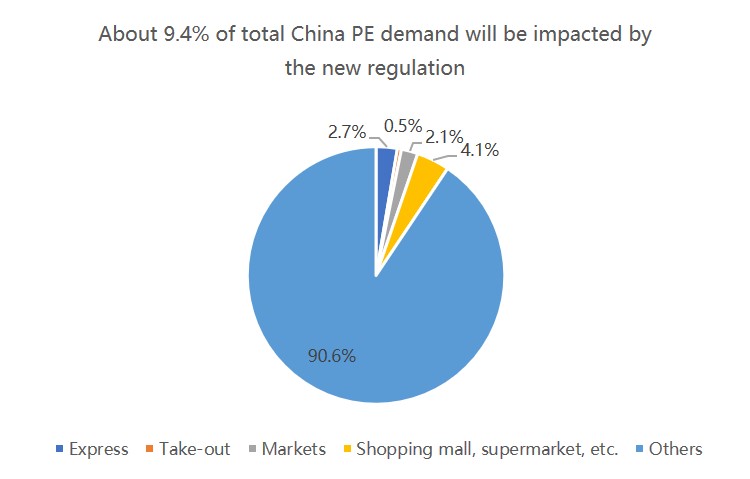 The estimates suggest that once non-biodegradable plastic bags are banned in express delivery and takeaway, 3.11m tonnes of PE demand might be affected, which accounts for 9.4% of China’s total PE demand in 2019.

In addition, by the end of 2020, China will ban the production and sale of single-use foam plastic tableware, which is made mainly expandable polystyrene (EPS).

The new regulation is estimated to reduce EPS demand by 0.5%. Rough estimates show that 30m foam lunch boxes are used in China every day. The production of 10,000 foam lunch boxes uses 12 kilograms (kg) of plastics, translates into 13,000-15,000 tonnes of EPS demand annually. According to ICIS data, China’s EPS consumption will reach at 3.11m tonnes in 2019.

Polypropylene (PP) packaging boxes have overtaken foam lunch boxes to become the mainstream packaging in catering, with the rapid development of take-away services. Therefore, the ban on non-degradable single-use plastic tableware in the new regulation will also weigh on PP demand.

Assuming that every take-away order uses three packing boxes on average, and that one packing box weighs around 20g, the plastic consumption in packing boxes in China totals around 1.2m tonnes.

At present, most packaging boxes are made of PP, and only some cold food boxes use polyethylene terephthalate (PET).

The ban creates great uncertainty because it is unlikely to be completely effective at once. The market is waiting for details on alternative materials and punishment proposals from each regional government.

China’s National Development and Reform Commission (NDRC) and Ministry of Ecology and Environment rolled out the new regulations to control plastic pollution on 19 January.

According to the regulations, the production, sale and use of some plastic products will be banned in three stages in 2020, 2022 and 2025. The purpose is to build up a plastic products industry management system and to effectively control plastic pollution.

Jimmy Zhang and Lina Xu contributed to this article
ICN