Bulk of non-compliant chems in EU from imported goods – Cefic

LONDON (ICIS)–Imported goods are the key source of non-compliance with Reach and other chemicals regulatory frameworks within the EU, according to industry body Cefic.

The group, which represents chemicals firms across the EU, released figures this week showing a 24% year on year increase in non-compliant chemicals in 2019, based on data from the EU’s rapid alert system (RAPEX), driven by an increase in hazardous substances in electronic equipment.

The growing level of regulatory oversight for chemicals in the EU means that member states will need to increase their oversight and enforcement practices in tandem with that, a spokesperson added.

“The fact that a lot of cases of non-compliance are registered in RAPEX suggests that the system is working fairly well. However, it can and should be improved,” Cefic said in a statement.

The number of articles flagged by RAPEX in violation of the Reach system remained steady year on year, Cefic added, despite the uptick in overall non-compliance.

The European Chemicals Agency (ECHA) recently announced the results to a series of spot checks it carried out between October 2017 and December 2018, where authorities from 15 member states carried out checks on 682 articles from 405 companies.

12% of products inspected in the dragnet were found to contain substance of very high concern (SVHCs), and that 88% of the suppliers of those products failed to communicate sufficient information to customers about hazardous or controlled materials in products they supplied.

Restricted phthalates, mostly found in children’s toys, were the most frequent cases of non-compliance at 25%.

The effectiveness of RAPEX in tracking non-compliant products shows that measures to improve oversight by member states are improving, according to an ECHA spokesperson.

“We agree that enforcement is a key to success of REACH,” he said. “Safety of consumers cannot be achieved without effective enforcement. The cases found in RAPEX are notified by national enforcement authorities and the increasing number shows that they are finding and addressing non-compliance in unsafe products.”

Compliance with Reach and other systems within the EU remains strong, according to Cefic, with imports the key source of products in violation of the safety standards.

“There are not that many cases of non-compliance with Reach coming from inside the EU/EEA, it’s the imported goods that are the problem,” a Cefic spokesperson said.

“Reach is the most stringent chemical legislation in the world and it is delivering results towards achieving its objectives… however, there are certain areas of Reach which can and should be improved. Better enforcement of Reach in imports is one of those areas,” she added. 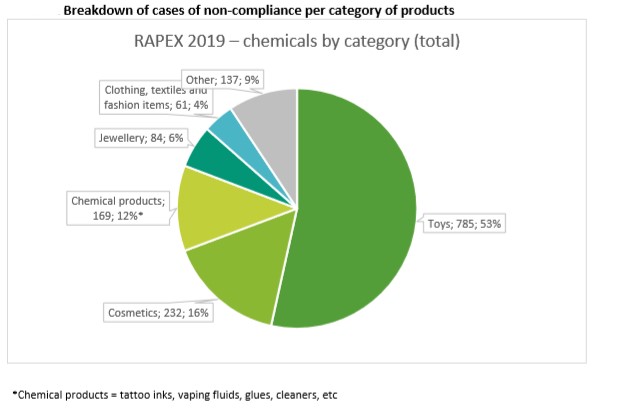 Clarification: recasts 92% figure to indicate that the figure refers to Reach non-compliant material