US chems pummelled as Dow Jones falls 5.86% into bear market

HOUSTON (ICIS)–US-listed chemical shares fell sharply on Wednesday as the Dow Jones Industrial Average fell by 5.86%, entering a bear market and ending the longest bull run in its history.

The declines deepened after the World Health Organization (WHO) declared the coronavirus (Covid-19) a pandemic.

Meanwhile, the oil market took another blow from the latest forecasts published by OPEC and the Energy Information Administration (EIA).

The table below shows the major indices followed by ICIS.

The Dow Jones has fallen by more than 20% from its recent high, entering a bear market, Bloomberg reported. The S&P 500 is only points away from a bear market.

For the Dow Jones, its drop from an all-time high to an all-time low was the fastest on record, taking just 19 sessions, the Wall Street Journal reported.

The Dow Jones reached another milestone. It and the S&P 500 each have changed by at least 2.75% for 10 of the past 13 trading sessions. The following chart illustrates volatility for the Dow Jones Industrial Average. 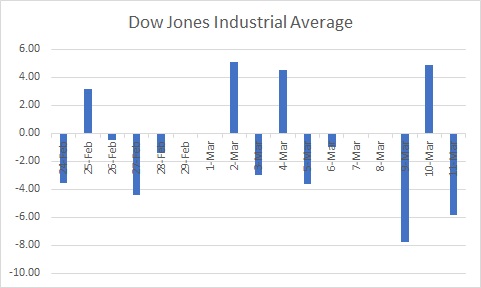 The violent swings continued as the coronavirus continued to spread in the US and the rest of the world.

The following compares the global cases reported on Tuesday with those reported on 4 March.

The following shows the growth in US cases.

Measures adopted to control the spread of the coronavirus have restricted travel, lowering demand for oil.

OPEC has slashed its 2020 crude demand growth forecasts for the second consecutive week down to nearly nothing.

At the same time, talks between OPEC and Russia to extend a production-cut agreement have collapsed. Unless the two sides reach a new agreement, both sides could produce oil without constraint starting on 1 April.

The US Energy Information Administration (EIA) raised its forecast for OPEC oil production to 29.2m bbl/day from April through December, up from 28.7m bbl/day during the first quarter of 2020.

Second-quarter prices will be $37/bbl before rising to $42/bbl in the second half of the year, the EIA said.

Given the gloomy outlook, oil prices gave up most of their gains from Tuesday. Brent closed at $35.79 and WTI closed at $32.98.

US chemical producers are vulnerable to low oil prices because their feedstock advantage starts to erode when crude prices fall in relation to those for natural gas.

The US relies predominantly on ethane and other natural gas liquids (NGLs) as feedstock, while much of the world relies overwhelmingly on oil-based naphtha.

As a result, when oil prices fall in relation to gas, US producers could see margins decline.

At the same time, chemical companies are contending with the disruptions from the coronavirus, which is lowering demand for their products and disrupting their supply chains.

Many fell by double-digit rates on Monday, with Dow and others falling by more than 20%.

They made up some ground on Tuesday before falling again.

The following shows the performance of the US-listed chemical stocks followed by ICIS.