LONDON (ICIS)–In extraordinary times, a sense of normality is welcome, and the pull on purified terephthalic acid (PTA) and downstream polyethylene terephthalate (PET) in Europe seems to be “normal” for the time of year.

However, the reasons behind that normality are not necessarily the normal ones.

Coronavirus has hit global petrochemicals and financial markets hard, but for PET and by default its feedstock PTA, the results have not all been negative.

“In spite of the virus, I see demand as normal for time of year. It is surprising, as I thought there would be less sales or postponed sales,” a trader said.

WATER, PIZZAS IN PET PACKAGING
A spike in demand for products in bulk made of PET, such as large water bottles and certain foods that keep, has got the market moving.

“It seems fear of contagion and the highlighted importance of hygiene in the food chain, consumption of tap water and direct distribution of fruit and vegetables via ‘bio’ channels have lessened,” a source said.

“People go back to buying water in bottles and pizzas… in PET trays.”

There is the seasonality of the product to consider, as it is after all spring, the typical pick-up period in time for summer’s peak demand.

The expectation of fewer imports compared to the same time in 2019, is partly due to European suppliers upping their competitiveness in attempts to regain market share in what has been a trying period for them in terms of margins.

Suppliers appear to be on a more positive track now since stocks had a chance to run down in a market that has been buoyed by little other than hand-to-mouth sales up to now.

‘DESPERATE’ TO OFFLOAD
That said, there are those who continue to talk of sellers being “desperate” to offload material.

After all, the global markets are fraught with negativity, making it difficult to know when one should buy in a falling market.

Crude oil prices crashed, creating bear markets across the globe, and Euro:US dollar exchange rates moved once more into the favour of importers. 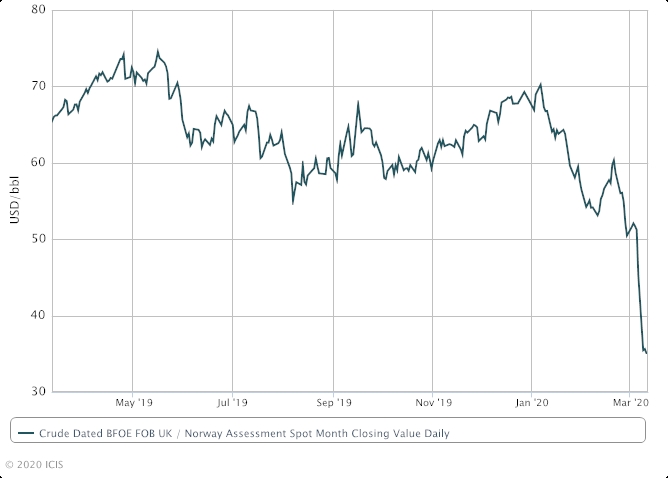 Still there is little evidence of what March PET production costs will be but, thus far, the drivers mentioned above are weak.

So much so, that PET prices already came off for March deliveries, despite the lack of a paraxylene (PX) contract settlement. 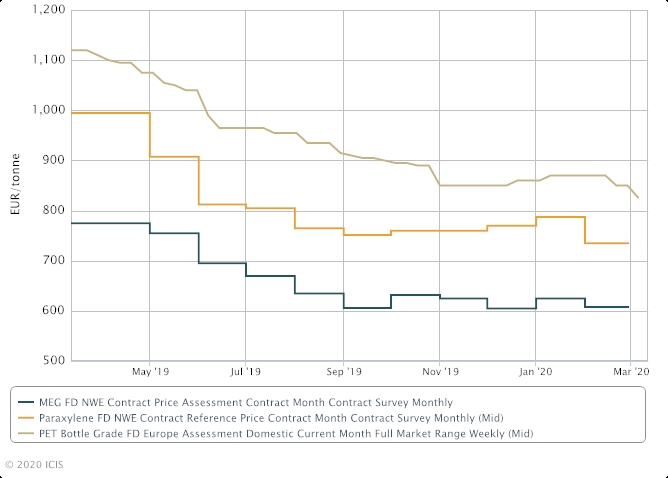 –
History shows that price direction can change at a moment’s notice, notwithstanding upstream movements.

“…Spot prices I suppose will go up in April as everybody takes maximum volumes, panic all around,” a buyer said.

As people carry on as best they can amid the chaos, the reality is that what lies ahead is a great unknown.

“I’m not sure if it can remain a positive or turn into a negative because cinemas are closed, travelling is banned,” a seller said.

“Are we going to be able to continue producing and transporting material?”

The world and the markets are in survival mode, and how long this lasts will depend on forces beyond their control.

PET resins can be broadly classified into bottle, fibre or film grade, named according to the downstream applications. Bottle grade resin is the most commonly traded form of PET resin and it is used in bottle and container packaging through blow moulding and thermoforming.

Fibre grade resin goes into making polyester fibre, while film grade resin is used in electrical and flexible packaging applications. PET can be compounded with glass fibre for the production of engineering plastics.

Front page picture: Madrid’s Puerta del Sol almost empty as the region home to Spain’s capital said on Friday that all stores, except grocery stores and pharmacies, would close from 14 March to avoid the spread of coronavirus; Madrid has nearly two thirds of all cases confirmed in Spain
Picture source: Kiko Huesca/EPA-EFE/Shutterstock