BUCHAREST (ICIS)–Eastern European and Turkish energy companies are braced for sharp drops in demand and potential bankruptcies as countries introduce emergency measures in a bid to contain the coronavirus outbreak.

Although the spread of the virus is not as extensive in this region as in Italy or Spain, the impact of the emergency measures that have been taken is likely to be felt acutely because national economies are fragile.

Consumption is expected to fall between 10-20% in April across some parts of the region, with the economic fallout likely to be felt throughout the upcoming months, traders told ICIS on Friday.

The highest drop in demand will likely be felt in the electricity sector as commercial consumers such as bars, restaurants, hotels or large supermarkets have been told to shut down.

This means that in countries where gas-fired capacity has a greater share of the power generation mix, natural gas demand is also likely to be hit.

One of the most affected countries is Romania where car manufacturers Dacia-Renault and Ford as well as tyre maker Pirelli have temporarily suspended operations as the country declared a state of emergency on 16 March.

On 18 March, most recent data published by electricity grid operator Transelectrica shows the maximum capacity in operation was 8.1GW compared to 8.4GW over the same period last year.

Gas demand was hovering around 37GWh/day at the beginning of this week, compared to nearly 39GWh/day over the same period last year.

“Dozens and dozens of consumers are notifying gas suppliers that they may not be able to pay for the consumed gas and would stop off-takes for the upcoming period,“ Dumitru Chisalita, president of the Romania-based Asociatia Energia Inteligenta said.

Another Romanian market participant said the country was entering a high-risk zone because once the emergency measures were lifted banks would notify companies to start paying their credit and many outfits may not be able to do so.

“We may see a chain of bankruptcies and unless we’re talking large producers such as OMV Petrom or Romgaz, which may still have access to credit, all other companies would have to introduce pre-paid transactions,” the second Romanian source said.

A large producer is thought to be looking to export some volumes regionally as production would be difficult to stop at short notice.

Market sources said Romania started the injection season on 2 March 2020, 14 days earlier than last year with. This is because of the huge volumes of gas around, which is allowing both injection and extraction depending on the short-term outlook.

Ukrainian companies have also raised concerns about the impact of emergency measures, particularly on the electricity sector. 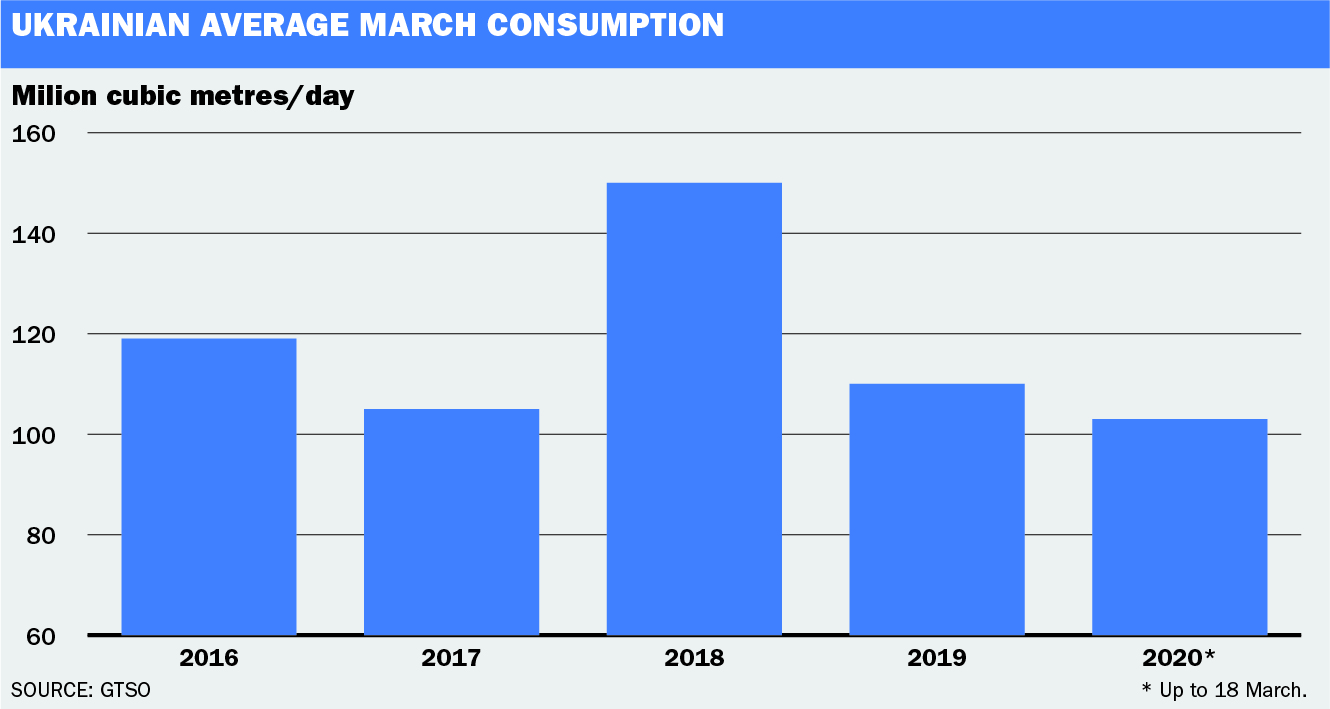 A Ukrainian market source said a large generator was operating at only a fifth of its installed capacity.

“Electricity generators will have to ask the grid operator [Ukrenergo] to reduce production at [state-owned] nuclear power plants particularly at weekends when demand falls even more, otherwise private generators won’t be able to operate,” he said.

Ukraine has also instructed commercial consumers such as bars, restaurants and hotels to close down, which means that around 2TWh, or nearly a sixth of total electricity demand, may be wiped out monthly.

“We expect a drop in demand of 5-6% in March and maybe 8-10% in April year on year. April demand may also be affected because of falling consumption during Easter. Currently industrial consumption is not affected, but it’s likely to drop during Easter next month,” the source said.

Gas consumption has been ticking lower, falling from 112 million cubic metres (mcm)/day (1.2TWh/day) on 17 March to 106mcm/day the following day, according to gas grid operator GTSO. Nevertheless, volumes are in line with average March levels.

Ukraine, like Romania has also started the injection season, with two facilities already in injection mode. Some 53mcm have already been injected, according to storage operator Ukrtransgaz.

Greece is particularly concerned about the economic fallout from the coronavirus outbreak, being a key tourist destination.

Greek traders polled by ICIS said they expect a 10-20% fall in demand in April on the back of the virus outbreak and falling consumption during Easter.

Greece is affected not only on the electricity front but also on the gas side.

This is because on the one hand it experiences a drop in commercial consumption from bars, hotels and restaurants which have now closed down, but also because 65-70% of gas demand comes from the electricity sector.

“It’s hard to quantify the impact right now, but I would say that there is a double impact. On the one hand commercial consumption of gas is around 5-10%, on the other hand around 70% of gas consumption comes from electricity,” he said.

A second Greek trader said he expected some gas companies to forego off-taking LNG cargoes to rebalance supply and demand.

Like Greece, Turkey is also keen on protecting its tourism sector as the peak summer season is approaching.

For now, although commercial consumers such as bars, hotels and restaurants have been told to shut down, demand for electricity and gas has been increasing on the back of colder temperatures.

“I don’t expect the government to take any drastic measures because they’re looking to protect the economy,” a Turkish trader said.

“We may see a drop in demand but this may be offset by the impact of falling oil-indexed import gas prices which could drop by $70.00/kscm to $180.00-$190.00/kscm in the second half of the year. It’s true the Turkish lira has also been depreciating against the US dollar, but if it holds stable we may not be too affected,” he added.

However, he pointed out that wind production may be affected as Turkey may not be able to add some 1GW of new wind capacity this year as large turbine producers such as Siemens had stopping delivering them.

One trader said consumers had the option to call force majeure, but added that the conditions for invoking it may not be clear cut and therefore it would be difficult to foresee how electricity and gas demand would fare in the upcoming weeks.