• Price fall of 9% across Europe

LONDON (ICIS)–A scenario where power demand drops one-tenth through up to June as a result of measures taken to slow the spread of the coronavirus would see power prices across European markets fall by an average 9% in 2020.

In this scenario, Germany and France could see as much as €5/MWh wiped off their average power price this year compared to previous expectations, with the UK dropping a more moderate €1.60/MWh, the analysis demonstrated.

Power demand in Italy dropped significantly in the 10 days following a government-enforced lockdown on 9 March. The measures forced a substantial section of Italian businesses to close with some hard-hit regions recorded a demand slump of 15% in the second week of quarantine relative to the five-year March average. Demand for power also dropped significantly in France which imposed similar measures the following week.

ICIS analysts modelled a scenario in which power demand fell by one-tenth between March and June. From July to December, the scenario then assumed a steady recovery of demand. These assumptions were based on the level of power demand drop Italy saw over the first two weeks of lockdown and its expected continuation over the coming months as other European countries potentially employ similar measures.

The gradual recovery from July onwards factors in an expected economic slowdown in Europe due to the coronavirus impact.

The overall result was a Europe-wide demand slump of 6% in 2020 compared to the ICIS analyst base case scenario, equal to a decrease of 198TWh.

The result of the demand fall due to the coronavirus impact would be a 9% drop in power prices. German prices would fall 11%, equivalent to €4/MWh, relative to the prior ICIS base case. French prices would see a 15% or €5/MWh hit. The UK would be relatively less impacted with prices falling €1.60/MWh, or 4%. 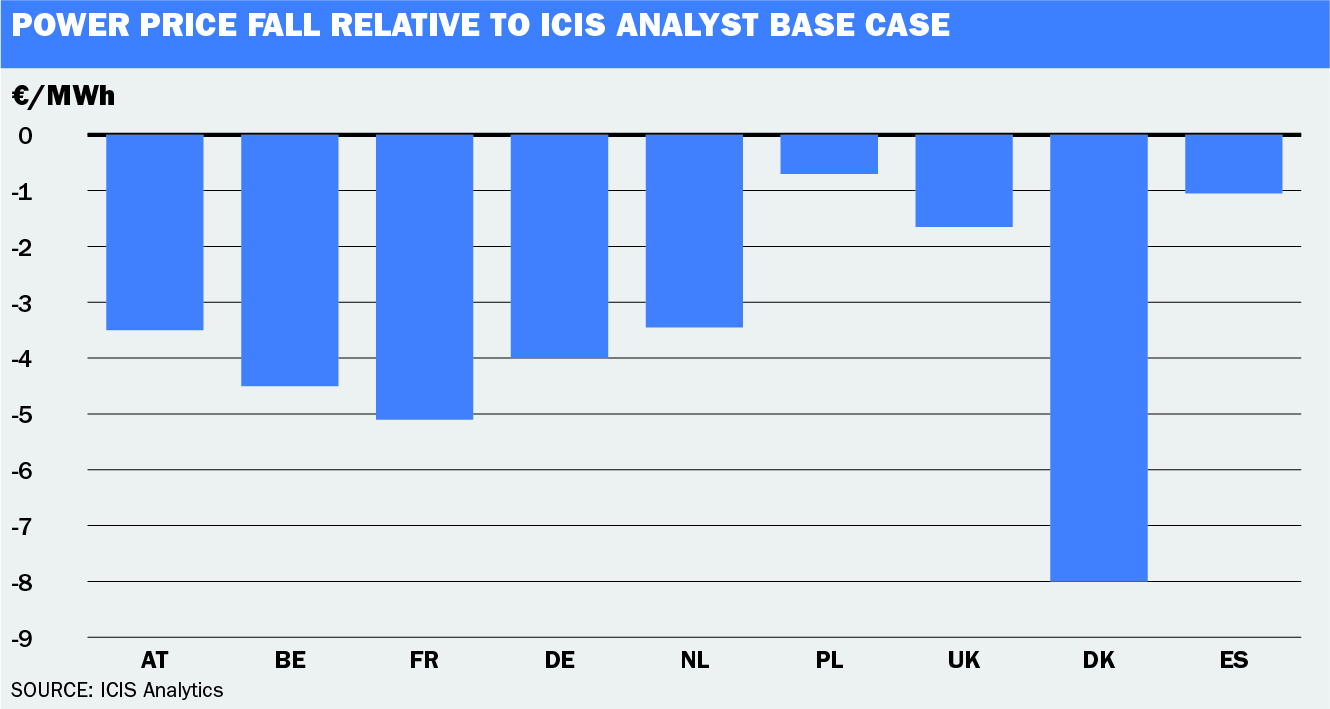 Countries such as Spain and Poland with a relatively flat merit order associated with the modelled demand flexibility would not see as significant a price drop of demand-related closures, according to the model results. Denmark, on the other hand, where the merit order is more elastic, would experience a fall in power prices of around one-quarter.

The result across Europe was an average power price drop of 9% in the scenario where demand would fall by one-tenth over the coming months.

ICIS will monitor the situation closely and update the modelled scenario setting once more data on demand for other member states becomes available.