HOUSTON (ICIS)–US isopropanol (IPA) prices once again soared due to strong demand for hand sanitizer during the coronavirus (Covid-19) outbreak.

European prices had risen  considerably in the past month,  but prices in the US took off last week and are continuing to rise, especially as hospitals are seeing a rise in patients.

IPA prices DEL (delivered) to the US Gulf are assessed at 60-150 cents/lb. 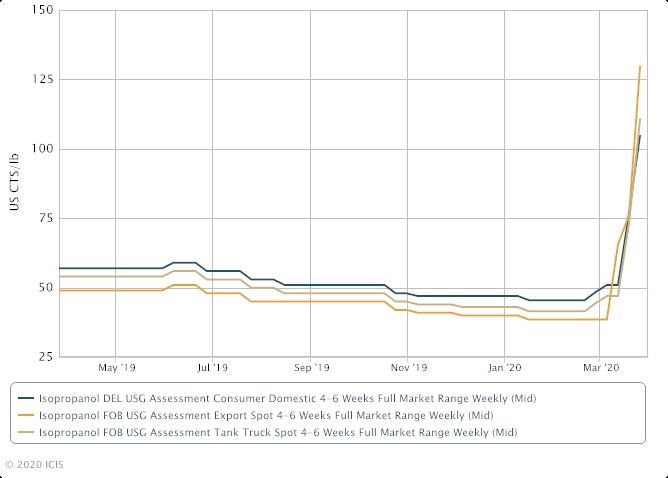 DOMESTIC IPA MARKETS
Isopropyl alcohol is used in many hand sanitizers, which are in high demand among consumers because of their ability to kill germs.

Hand sanitizers were among the first products to sell out at grocery stores and pharmacies, but demand has increased since then, especially in hospitals.

While IPA from major suppliers were generally charged in the low to mid-60 cents/lb range on the lower end, secondary markets were unpredictable and changing rapidly.

A source said that IPA was exchanging hands between many different sources before heading to end users, sometimes with five or six different distributors.

Prices above the high end were heard, but some cases could not be confirmed, and some were considered not representative of the broader market.

It was initially believed that the US was not seeing the same level of IPA price increases as in Europe since it had more ethanol.

However, due to the increase in US exports to Europe as well as the rapid rise in domestic demand IPA as US coronavirus cases skyrocketed, domestic prices have increased at unprecedented levels.

As of 26 March, the US now has more confirmed cases of coronavirus than even China and Italy.

One source said that more IPA had been exported  to Europe over the past three weeks than in an entire year, under typical conditions.

Some distributors were told that IPA headed to Europe had to be sold for medical purposes, although this was not confirmed by the wider market.

IPA is a solvent principally used in industrial and consumer products including cosmetics and personal-care products, paints and resins, pharmaceuticals, food, inks and adhesives. It is also used in de-icers in the winter.