LONDON (ICIS)–Gazprom’s pipeline project aimed at supplying natural gas to China from fields in western Siberia is moving to the pre-investment stage after Russian President Vladimir Putin gave the green light to the state-owned gas producer on 27 March.

Supplies to China via this new route called Power of Siberia 2 or the Altai route may total up to 50 billion cubic meters (bcm) per year, Gazprom CEO Alexei Miller told Putin in a recorded conversation published on Gazprom’s website. This is almost double the volumes preliminary agreed. , Gazprom and China’s CNPC agreed in principle on a 30bcm/year contract for this route.

Russia’s largest reserves are located in west Siberia in the Yamal peninsula and already feed the European Union.

Connecting these giant reserves could put Gazprom in a position of swing supplier, where it could send gas to the market that offers the highest price.

Russia has been looking for many years to diversify its export markets away from its core European market to the Asia-Pacific region and specifically China. In May 2014, Gazprom signed a contract worth $400bn with Chinese CNPC to supply 38bcm/year through the Power of Siberia pipeline (the so-called Eastern Route) over 30 years starting in 2018-2020.

Gas started flowing via Power of Siberia on 2 December 2019, but volumes have been small. Gazprom sent 328 million cubic metres (mcm) through the pipeline in December, a little more than the 10mcm/day initially planned. Volumes fell to 313mcm in January and to 259mcm in February. Gazprom expected deliveries through Power of Siberia to only reach the full contracted capacity of 38bcm/year in 2025.

Gazprom said in June last year that it was for additional gas deliveries to northeast China through the Power of Siberia pipeline but price remained a sticking point amid rising competition from LNG.

“Negotiations are in progress between Gazprom and CNPC. The exact volume of additional supplies has not been specified yet, and an agreement on the price is expected to be reached shortly,” Gazprom told ICIS in early June. 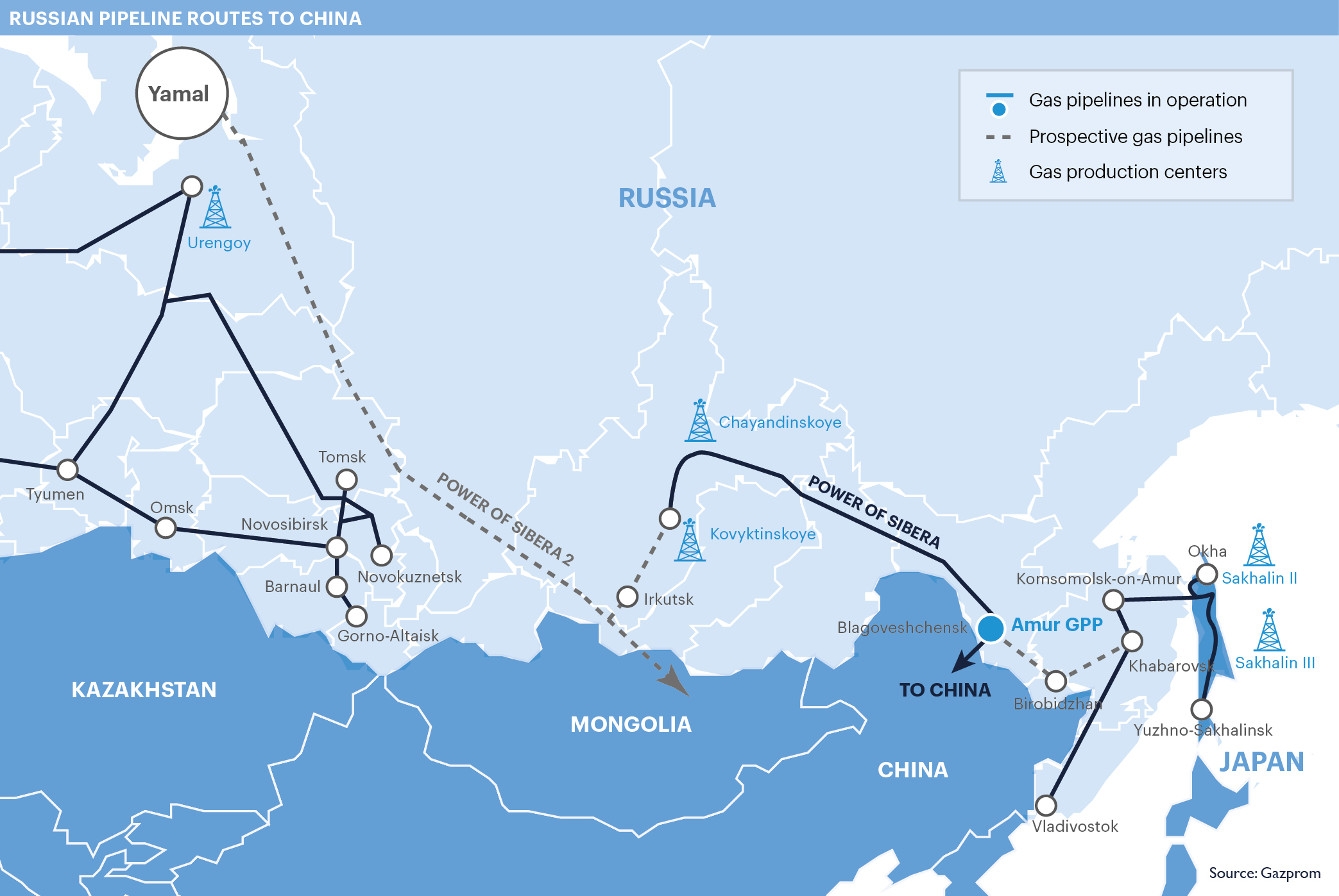 Gazprom plans to launch the Power of Siberia 2 pipeline by 2030, asshown in the company’s in February. But price negotiations with China may still be tricky.

“When we agree on the price with our Chinese partners, we will immediately launch this pipeline into construction,” Miller said on 28 June 2019.

Initially, another route via Russia’s Altai region and entering western China at the Russo-Chinese border had been considered. But choosing the route crossing Mongolia is likely to result in lower transportation costs as the section in China would be shorter. Besides, the possibility to send some of the gas to the Mongolian market could potentially mean lower transit fees. Price negotiations for this route are therefore more likely to move on.

The pre-investment stage includes the development of a feasibility study and the design-and-survey works.

Gazprom’s map showing the prospective route for Power of Siberia 2 indicates the pipeline would cross Mongolia and enter China west of Beijing. This suggests volumes would be directed to the Chinese zone where demand is the highest, and could potentially also feed the Mongolian capital city Ulan Bator. The latter concentrates over half of Mongolia’s population and ranks among the most polluted cities in the world.

The country has been the traditional sphere of influence of the Kremlin since the Soviet era. In recent years, Russia’s strategic focus has shifted to the east, as it aims to diversify its export portfolio. Mongolia is ideally located to play a geopolitical role in Russia’s new strategy.

The revival of this old special relationship would be mutually beneficial as transit revenues from Power of Siberia 2 would be a great boost to the Mongolian sluggish economy.

Power of Siberia 2 will also connect Russia’s key production centres in western and eastern Siberia and thus enhance the reliability of supplies across Russia. A preliminary feasibility analysis has been carried out and has shown the project is feasible and cost-effective, Miller told Putin.

The expansion of the Sakhalin-Khabarovsk-Vladivostok pipeline, also called the far eastern route, is also planned to be launched by 2030.