NEW YORK (ICIS)–The global chemical sector should prepare for an extended downturn along with lower-for-longer oil prices, both of which will have major implications for profitability and future investments.

“It’s very possible that Q3 could have negative GDP as well [as Q2], and then the question is how big is the bounce back towards the end of the year?” said Rhian O’Connor, ICIS lead analyst, demand forecasting on an ICIS webinar, part of a series hosted by ICIS.

“If everything goes back to normal on day one, we’re looking at quite a strong quarter-on-quarter growth through the second half of the year. However, a lot of people have lost their jobs, savings and businesses. We’re not all going to rush out after this crisis and buy a car or fridge,” she added.

The analyst also cited an Oxford Economics survey which showed more than a third of participants expecting three or more quarters of negative global GDP.

EXTENDED DOWNTURN, COMPRESSED SPREADS
“Our view is that demand for this year, and possibly going into 2021 will not return to pre-crisis levels,” said O’Connor. “We are going to see a more extended downturn than we were expecting, and then a slower recovery than many are forecasting.”

Crude oil prices will also likely be “lower for longer” even if there is a deal between OPEC and Russia or if Saudi Arabia agrees to curtail production, she noted.

For petrochemicals, the spread over oil prices should also be squeezed in a global recession with lower volumes, O’Connor said.

Barbara Ortner, head of market reporting at ICIS, cited major drops for European ethylene, propylene, and benzene contract prices on 31 March. For Europe benzene, the April contract plunged a stunning 70% from March, settling at a record low of €171/tonne. Ethylene April contracts fell by a record €200/tonne, to €720/tonne, while propylene dropped by €175/tonne, to €650/tonne.

“Following benzene, the styrene contract price for April should be discussed tomorrow and that too is likely to follow the same trend, and that will have a big impact on the whole styrenics chain – polystyrene (PS), expandable PS (EPS) and ABS (acrylonitrile butadiene styrene) where demand is already down because of the cuts in automotive and construction,” said Ortner. 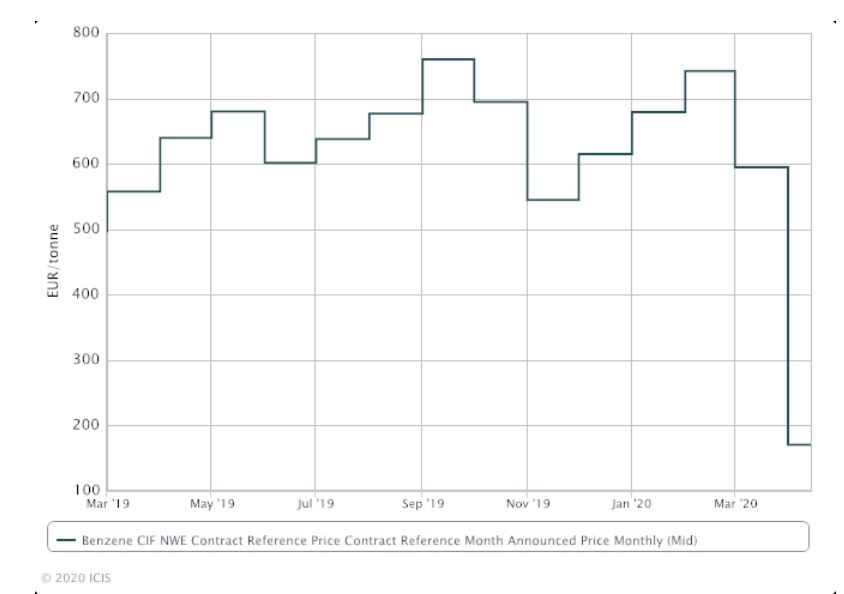 CHINA REBOUNDS BUT OUTLOOK CHALLENGING
While China’s manufacturing economy is getting back on track and local demand is improving, it will encounter extremely difficult export conditions.

According to Jim Sheehan, US chemicals equity analyst at SunTrust Robinson Humphrey, chemical company managements are seeing a reacceleration of demand in China with all their facilities getting back to normal.

“Companies with exposure to automotive and industrial customers are starting to run at full employment capacity but not necessarily at full operating rates,” he said. “These facilities are just running to meet demand.”

“With demand rebounding in China, that may sound like a positive thing but the outlook for Q2  is that we’re going to have a major economic contraction and China may not be exporting into very healthy markets. So it remains to be seen what level of activity we normalise at in China,” he added.

OIL FORECASTS SLASHED
Meanwhile, analysts are taking down crude oil price forecasts for 2020 and beyond.

“We lowered our already-bearish oil priced deck further as coronavirus containment cuts into global oil demand, while the balance is getting longer on the supply side due to the OPEC+ schism,” said Ed Morse, global head of commodities at Citi, on a 31 March conference call hosted by the NABE (National Association for Business Economics). “We now see Brent averaging $30/bbl this year and $17/bbl in Q2.”

In his base-case scenario, Morse sees Brent recovering to about $42/bbl by Q4 2021, still far below the $60+/bbl level before the crude oil crash in late February to March.

The rapid shuttering of business activity in Europe and North America, even as China is recovering, should lead to a hit to demand on the order of 16m bbl/day or more in Q2 and an overall decline of 8.7m bbl/day in 2020 in Citi’s base case, said Morse.

GLOBAL PE MARGINS
The dramatic drop in crude oil has turned everything on its head – the US petrochemical cost advantage in particular.

“These ethane advantage US producers had is gone. Lower oil means lower naphtha and lower European production costs, so the once advantaged US [product] is not advantaged anymore,” said O’Connor.

This presents a problem for US polyethylene (PE) producers in particular who have ramped up capacity with worldscale cracker projects for the export market.

“It all depends on what the price of crude oil is long term,” said Sheehan. “Crude oil would have to get back above $50/bbl for some of these large projects to make sense economically and I’m not optimistic about a return to $50 anytime soon.”

“On capacity additions in the US, a lot of them are being slowed down or postponed… We’re seeing this across the board – not just in the ethylene chain… Many companies are announcing that they’re reviewing and assessing their capital spending plans for 2020 and if the crisis were to continue in 2021, we would probably see the same thing next year,” he added.

In the meantime, with the plunge in oil and naphtha feedstock prices, integrated PE production in Europe is seeing renewed profitability, completely flipping the US advantage.

European spot HDPE (high-density polyethylene) margins using naphtha feedstock have rocketed to $1,069/tonne as of 27 March, according to ICIS Petrochemical Analytics. That compares to $574/tonne for US HDPE using ethane feed. Asia HDPE margins using naphtha were $565/tonne, running neck and neck with the US now after being below zero through much of November and December 2019. 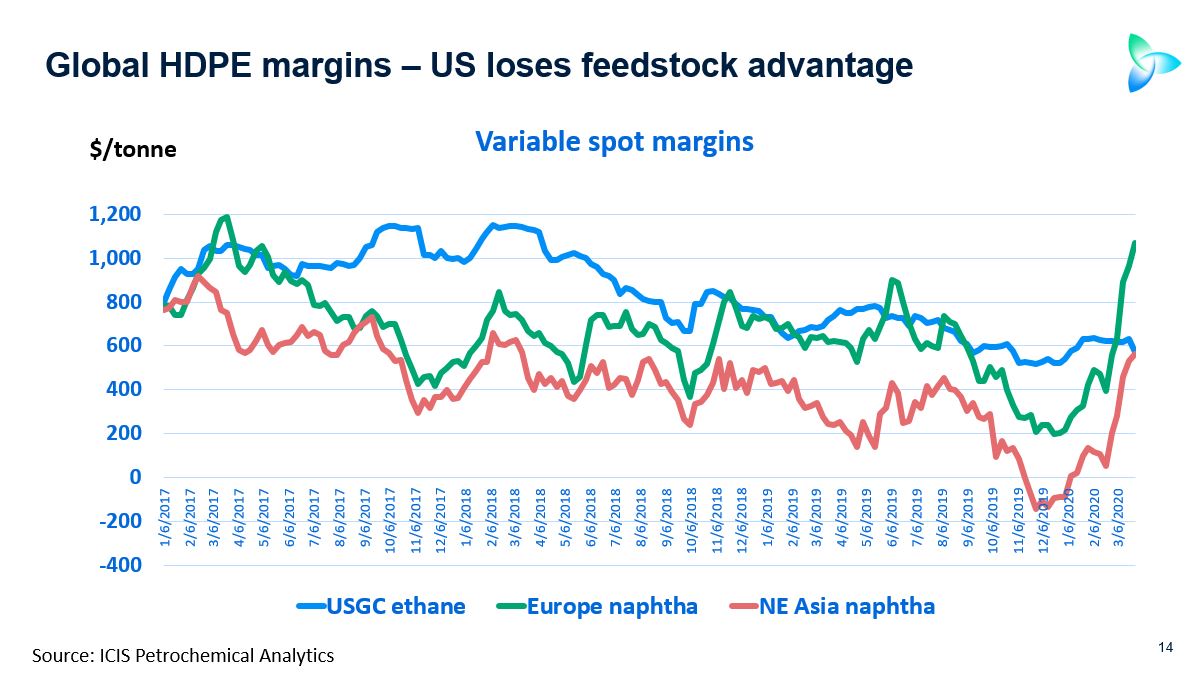 However, these robust margins are not sustainable in the face of global recession combined with overcapacity. Expect all these margins to come down as PE as well as co-product propylene and butadiene prices decline further.

“China is still building [ethylene and derivatives capacity] as well, and that’s not slowing because it’s not for economic but self-sufficiency reasons – to untangle their supply from the rest of the world,” said O’Connor.

“And in a world where we have structurally lower global demand, at least for one-two years, we’re going to see oversupply and that’s going to impact cracker decisions everywhere,” she added.

STOCK PRICES
For equity prices, sectors with greater consumer staples exposure are outperforming. Packaging stocks have held up much better than chemicals stocks. Chemicals feed into a wide range of applications, including automotive, construction and consumer durables which have been hardest hit.

“We’re seeing in the stock market companies with closer exposure to the consumer wallet faring better than companies further up the supply chain,” said Daniel Fletcher-Manuel, head of financial markets development at ICIS.

US chemical stocks have taken a beating with some down on the order of 40-50% year-to-date. This more than discounts the negative market fundamentals, Sheehan said.

“There’s still a lot of uncertainty about the depth and severity of the recession and the duration of it. But from what we know and can glean from talking to management teams, I would say the fundamentals are definitely discounted in the stocks,” the SunTrust analyst pointed out.

“The problem is that the volatility in the equity markets is so severe that the stocks aren’t really trading on the fundamentals right now. They’re trading on a variety of things, including emotion and fear, and there’s a lot of forced selling going on,” he added.

Liquidity and balance sheet concerns are also driving equity prices, and companies will seek to mitigate the impact by cutting back on capex and share buybacks, the analyst noted. 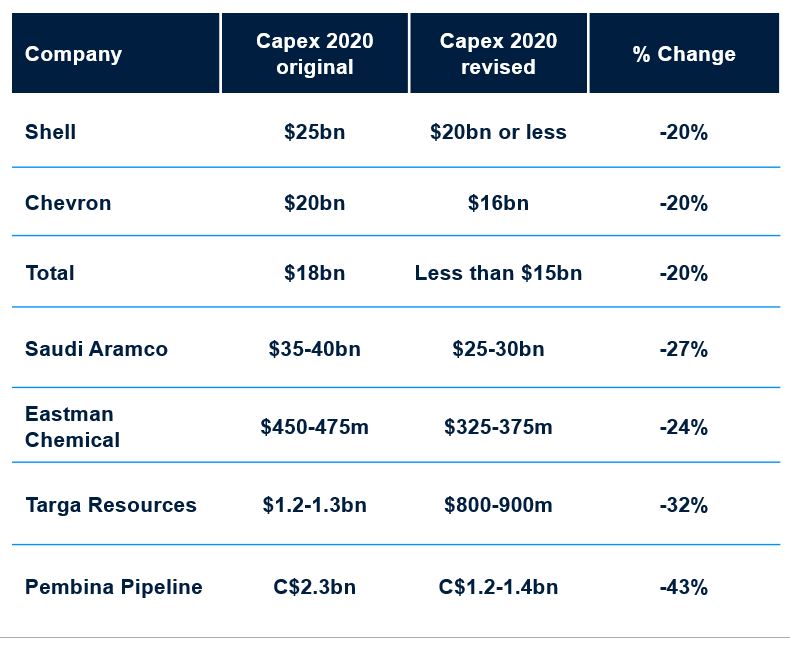 “Most companies in our space can manage through the crisis but that said, we just don’t know how long the crisis is going to last,” said Sheehan.

“If it’s two-three quarters of recession and we sort of get back to a more normal environment at year end, I don’t really see any problems,” he added. “But if we see an 18-month or two-year recession, then some companies have stretched balance sheets and institutional investors are going to be very wary of names like that where their interest coverage ratios are low and net debt/EBITDA ratios are very high.”

Sign up here for industry updates on “Making sense of market events: Coronavirus and oil price slumps”. Join the other webinars here.