CORRECTION: In the ICIS news story headlined “INSIGHT: France setting the pace for PET chemical recycling in Europe”, dated 24 May 2022, an Eastman sales figure in the 26th paragraph was incorrect and has been removed. A corrected story follows.

LONDON (ICIS)–France is continuing to lead the way in the development of the polyethylene terephthalate chemical recycling industry in Europe, with a spate of new facility announcements set to build out capacity in the country.

France will have three polyethylene terephthalate (PET) chemical recycling facilities opening by 2025, aiming to become the leader in new recycling technologies in Europe. Announcements from Eastman, Loop Industries and Carbios highlight not only the opportunities but also the challenges still facing the recycling industry. Namely, feedstocks.

The announcements point to positive progression within the chemical recycling sector for PET, but also raises questions around Europe’s – and the world’s – ability to provide these new facilities with the material they need.

Any new venture that requires plastic waste as a feedstock makes the established but supply constrained mechanical recycling sector nervous – especially if they view the new capacities as competition for raw materials. 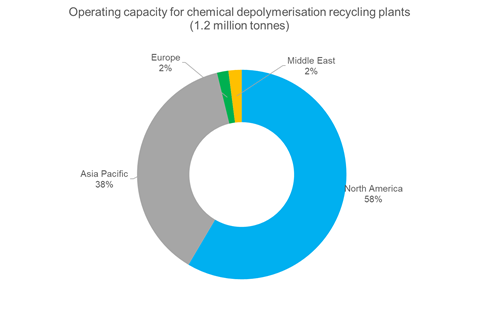 NEW FACILITY INVESTMENTS
Loop Industries announced that it has selected Port-Jerome-sur-Seine, in Normandy, as the site for a 70,000 tonne PET chemical recycling facility as part of the company’s partnership with Suez, with a projected investment of €250m.

The plant will take in waste plastic feedstock, transported down the Seine River from the Paris region, and will use Loop’s proprietary depolymerisation technology, Infinite Loop, to break down the PET and polyester waste into its base monomers. This will be used to produce 100% R-PET resin and polyester fibre.

Construction is expected to begin in 2023, with commissioning taking place 18 months later, though it remains unclear if the plant will reach commercial scale by 2025 to meet the EU’s target for 25% recycled content in all PET beverage bottles by 2025.

US chemicals major Eastman also announced plans to invest up to $1bn in a hard-to-recycle PET waste methanolysis-based chemical recycling facility in France. These feedstocks include all types of PET packaging, carpets, and apparel.

The facility would use Eastman’s polyester renewal technology via a methanolysis depolymerisation unit to chemically recycle up to 160,000 tonnes/year of PET waste that is currently incinerated. The total output capacity of the facility was not stated, as it is dependent on yields from the waste PET inputted. The plant it slated to be operational by 2025.

The plant is expected to be operational in 2025 and will have a slated post-consumer PET waste input capacity of 50,000 tonnes/year. The investment is estimated at €150m for Carbios’ core technology, which includes the integration of an additional purification stage.

A further €50m is reserved for the infrastructure preparation of the site. A feasibility study will be conducted for the industrialisation of Carbios’ technology on the IVL production site.

Carbios’ recycling technology uses an enzyme capable of depolymerising PET, which is then purified before being repolymerised back into PET.

The joint venture follows the set-up of a demonstration plant in Clermont-Ferrand that was established to essentially prove the process, which would support not only the build of a plant, but also others that are running under licensing agreements.

THE QUESTION OF FEEDSTOCKS
Chemical recycling requires waste to be sorted to specific grades, as certain contaminants can prove harmful to the process, such as high levels of polyvinyl chloride (PVC).

Such grades of waste would be required at high volumes due to the low yields currently seen in chemical recycling processes. This is a new ask of the waste collectors/sorters, which requires much attention in terms of improving qualities and meeting end user specifications, as well as expansion of sorting capacities across the region.

There are indications of investment in sorting in France, in particular. However, with other recycling projects announced for the market, it may not be enough in the near term.

Reacting to news of the announcements, mechanical recycler sources in Europe expressed concerns about what type of material will be used as feedstock for the two sites, both of which state they will use either plastic waste or hard-to-recycle PET.

The biggest concern from the mechanical side is whether the new facilities would look to compete for existing feedstocks. However, recyclers may rest slightly easier after both Loop and Eastman confirmed to ICIS they intend their individual sites to be complementary to the mechanical recycling process.

“As Loop’s technology can recycle all manner of coloured and contaminated PET, often containing additives, dyes and other polymers, as well as polyester fiber, we present a solution that is complementary to mechanical recyclers,” Loop’s director for marketing communications Stephanie Corrente said in an email to ICIS.

The partnership with waste manager Suez also helps with supply, as Suez will be able to provide waste input that would ‘otherwise have no sustainable afterlife through current recycling methods. Corrente added.

Eastman are also keen to ensure its new site does not encroach on the mechanical sector. Replying to a comment ICIS posted on Linkedin, Eastman said “our view is that mechanical recycling and molecular [chemical] recycling can and must complement each other to truly solve the global issue of material waste. Both technologies have a critical role.

“We will be focusing on those hard-to-recycle waste streams that currently have little value and are lost through either incineration or landfill.

Eastman’s CEO has stated that agreements to secure plastic waste feedstocks and government incentives, as well as the location of the site will be made in the coming months. So, we have yet to see how government supports the advancement of feedstock availability for chemical recycling.

It is unclear which PET waste feedstocks the Carbios/IVL plant will secure; the technology can process waste polyester textiles as well as packaging.  It remains to be seen if the process competes for existing mechanical recycling feedstocks or establishes alternative streams of difficult-to-recycle PET to expand the recycle coverage for all types of PET waste.

PLENTIFUL END MARKETS
Eastman and Loop Industries have stated the R-PET material will support major global consumer brands based in France, such as Danone, L’Oreal and L’Occitane, to meet their recycled plastic content commitments. As well as support France in its development of a circular economy.

Eastman also stated it had letters of intent for multi-year supply agreements for the plant output have been made with LVMH Beauty, The Estée Lauder Companies, Clarins, Procter & Gamble, L’Oreal and Danone.

THE FUTURE
The fact these three projects are located in France is not a coincidence.

Barbara Pompili, France’s Minister for Ecological Transition, said the Eastman investment “demonstrates our country’s willingness to embrace innovative technologies that will help us achieve our ecological and economic ambitions, by revolutionising our country’s plastics recycling capacities.”

Agnes Pannier-Runacher, French Delegate Minister for Industry, added that the Eastman project will allow France to position itself as a European leader in new technologies for recycling and recovering plastic waste.

“This investment is the result of the ambitious approach to industrial reconquest led by the Government since 2017, which has enabled France to become the most attractive country in Europe from 2018 onward for industrial projects,” Pannier-Runacher said.

It is unsurprising these companies have been able to secure support from the French government with such investments as France looks to achieve its ambitions. These developments fit with the objectives of the main regulation in France, the 2020 Circular Economy Law, “loi Agec”.

Objectives include reaching 100% recycled plastic by 2025 and a proportion of 5% re-used plastic by 2023, increasing to 10% in 2027.Its objectives also include reducing the number of single-use plastic bottles on the market by 50% by 2030.

Overall, France is advanced in its waste management strategy compared to other markets in Europe. It encourages investment and innovation and uses a range of regulation and mechanisms to deliver on the ambitions. There are many lessons to be learned from this approach.

Capacities are projected to rise rapidly, given the announced projects and assuming adequate volumes and qualities of feedstocks can be sourced to feed those plants.