LONDON (ICIS)–Europe’s most liquid gas markets continued to plummet in early trade on Thursday morning with the Dutch TTF and British NBP front-month breaching the €4/MWh and 10p/th support levels.

June and third-quarter gas contracts all collapsed despite a sizeable amount of US LNG being cancelled for July , as market participants’ fears continued over limited demand and filling European gas storage.

Spot LNG prices in Asia were also heard lower, with prices on the paper markets falling. The move there comes despite a rise in maintenance at Australian LNG plants over the coming weeks.

At the NBP the front-month and August ’20 were both dealing 7% down during early trade.

The moves come despite firmer Brent crude pricing, which again highlights how gas and oil markets have decoupled.

Poor US LNG export economics have forced further supply curtailments with market sources reporting the cancellation of 30 to 40 cargoes for July loading. But markets remain oversupplied and volatile.

Further updates on this cargo range are expected.

For context, 72 cargoes were loaded across US export plants in March and 61 in April. If 40 cargoes were to be cancelled, that could mean around 2.6m tonnes of LNG not loaded, or around 8% of monthly global supply.

The question in the market now is which supplier can or will reduce output next in order to bring some balance back to the market.

European-wide storage stocks were 14 percentage points higher at 66.5% full on 21 May, according to storage operator data.

This in conjunction with major demand destruction due to the coronavirus that has driven intense selling across major commodities in Europe.

European storage levels entered the gas summer season already over half full with injections in April taking place at a record pace.

A strong price incective to inject meant that over 8.4 billion cubic metres (bcm) was added to storage in Europe, 2.52bcm higher than the four-year average for the month of April.

In May there has been a slight slowdown in injection rates with sites in Netherlands and France over 60% full and Germany over 80%. 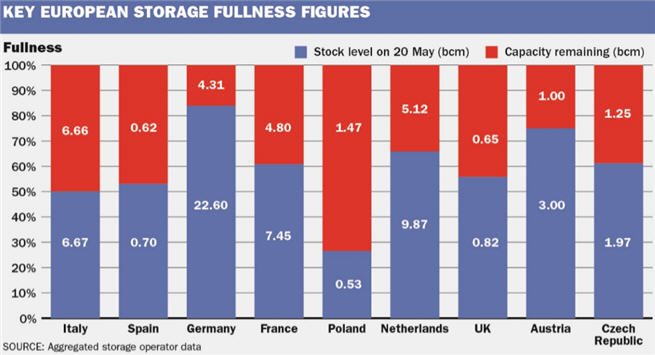 But a strong contango between third quarter months and June will likely mean that shippers continue to fill up sites at a strong rate in the coming month.

Sites could reach capacity well before the end of the season.

This will continue to pressure European gas prices, likely outweighing supporting factors from supply curtailments such as LNG and lower pipeline imports.

On the German power market, Europe’s benchmark, only the June ’20 contract responded to the TTF losses and further out there was little impact.

The typically most liquid front-year contract instead nudged up taking cues from extended gains on the EU carbon market and the ongoing bullish mood sweeping crude futures.