MEXICO CITY AND HOUSTON (ICIS)–Mexico’s TSO CENAGAS is willing to collaborate with private gas market participants following the success of previous experiences, its officials said in presentations for its recently-launched annual public consultation, known as Consulta Publica in Spanish.

One example is the so-called Las Adelitas hub planned for the northern part of the country. The proposed project would entail pipeline expansions in the US and Mexico and be aimed at reducing congestion at the Reynosa import point. It would also offer more routes from south Texas to key Mexico markets.

Pipeline developers Enbridge and IEnova are expected to serve as project developers for the US and Mexican sides, respectively, while CENAGAS is set to act as the commercial counterparty. The three already signed an MoU for the base project, which currently includes only one interconnect on the US side but has potential to interconnect to more than 10 pipes in the area around the Agua Dulce hub with more than 8 billion cubic feet (bcf)/day of capacity, according to an Enbridge spokesman. 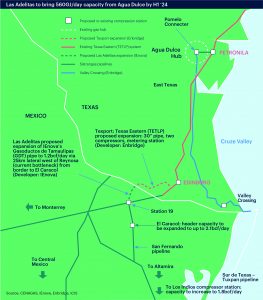 The project is expected to be in service during the first half of 2024, depending on when commercial agreements with potential shippers are finalised. These shippers could include industrials, power generators, local distribution companies (LDCs) and marketers.

“We are excited to continue to work with CENAGAS and IEnova under the MOU to pursue key markets in Mexico that would be served by this Texas Eastern Project. We are uniquely positioned to connect the growing supply at Agua Dulce with increasing demand in Mexico by expanding our TETLP system in south Texas,” said Elizabeth Perez, Enbridge’s manager of business development for south Texas.

“TETLP is one of the last systems in the area that can offer the cost-effective expansion capacity necessary to meet this demand and by minimising buildout we have the ability to provide shippers secondary access with competitive rates to TETLP’s STX receipt and delivery zones.”

Besides benefitting an area with heavy gas consumption, the project would also make flow deliveries more efficient and transparent, according to Daniela Flores, a former senior official in the gas unit at energy ministry SENER and consultant at Talanza Energy.

Las Adelitas offers potential for an interconnect to a future natural gas hub in Monterrey – a project CENAGAS officials have evaluated during past administrations, said Flores. It would mark the first time open seasons are simultaneously held on both sides of the border, which would be beneficial for users so they can match the capacity they secure on both sides of the border, she noted.

Other projects
Flores said the projects CENAGAS presented in the Consulta Publica show the TSO is past the stage of developing large infrastructure, such as pipelines, and now is set to focus on addressing some of the system’s bottlenecks.

The Leona Vicario hub in development is one example of these efforts. The hub could enter service as early as this year, according to CENAGAS officials. Located in Tabasco state, Leona Vicario could eventually connect to the Dos Bocas refinery and would serve to optimise control of flows in the area and help prevent future imbalances. The hub would also serve to channel future flows coming from the US to the Cuxtal pipeline in the southeast, Flores said. 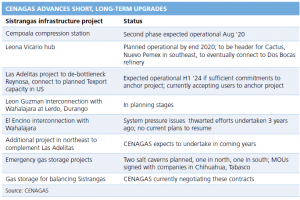 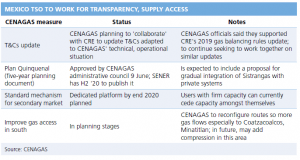 Energy regulator CRE recently gave a green light to the projects in CENAGAS’ long-term planning document known as the Plan Quinquenal in a second technical opinion it submitted at the end of May on the TSO’s 2020-2024 Plan Quinquenal. Though CRE’s approval is not required to publish the plan, with this favourable opinion, market participants can have more certainty that the projects presented in the Consulta Publica are likely to be developed, Flores said.

She recommends participants to start reaching out to CENAGAS directly or through experts to inquire about dates and procedures for the open seasons that will result from the proposed projects and attentively monitor energy ministry SENER’s final approval of the plan.

SENER has the reminder of the year to publish the plan, according to CENAGAS. Angeles Rodriguez and Claudia Espinosa