Home News US MX demand into H2 to be mixed amid changing energy values, rising exports

US MX demand into H2 to be mixed amid changing energy values, rising exports

HOUSTON (ICIS)–US spot mixed xylenes (MX) demand will vary going into the second half of the year, despite stable energy costs and a surge in exports.

Spreads between MX and RBOB gasoline have gradually risen in recent weeks amid the reopening of the US economy. As US transportation activity increases after months of imposed lockdown measures, refiners have prioritised gasoline blending operations over on-purpose production of MX volumes.

MX prices have showed marginal increases in recent weeks, mostly trading within a narrow band of offers and market sentiment. US spot MX prices trading on an FOB (free on board) basis closed higher at $1.57/gal the week of 17 July, up just 11% from the 19 July close of $1.415/gal.

US RBOB gasoline values have largely levelled off in recent weeks, registering $1.20/gal for the week of 17 July, just slightly higher than the $1.18/gal reported the week of 15 June. 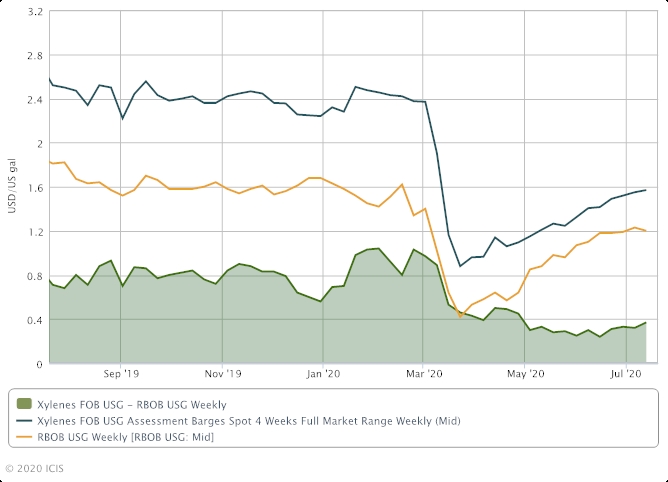 Despite a resurgence in MX prices, Q3 MX demand may be lacklustre, as spreads for on-purpose toluene consumption for MX production remain unattractive, and gasoline demand uncertainty is building as coronavirus cases climb in the US.

One market source attested that markets presently are “terrible” and that “even blenders are not interested” in MX volumes, which may indicate demand setbacks in coming months.

Per ICIS Supply and Demand data, US MX exports in May rose an impressive 71% over the previous month. In April, the US imported nearly 21,500 tonnes compared with the roughly 37,000 tonnes imported in May.

MX trade flows in the US have deviated from trade flows of other aromatics commodities. Starting in late 2019, the United States became a net importer of toluene and cumene, reversing an initial trend in export volumes over the course of 2019. 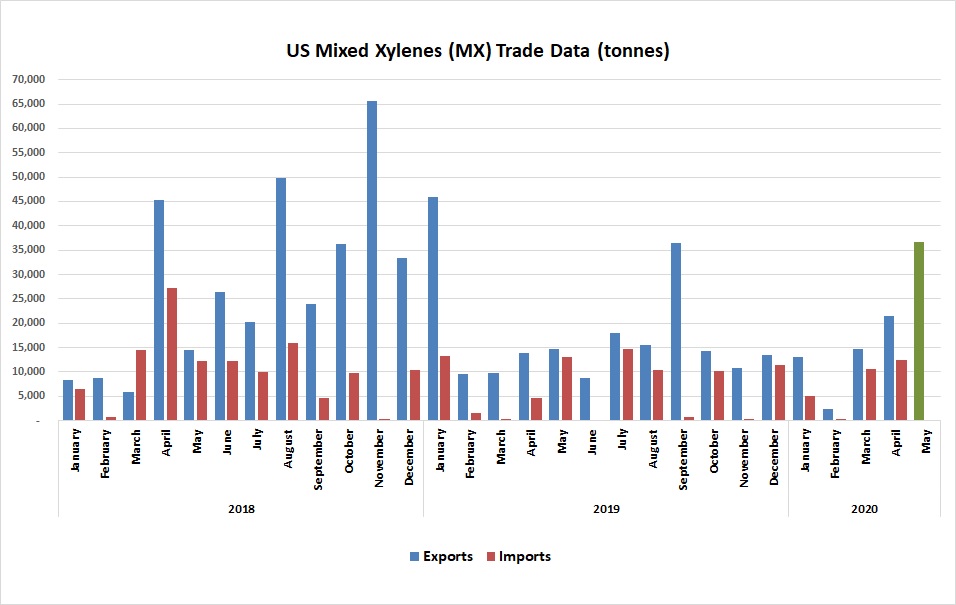 On the other hand, MX imports in May plummeted to just under 100 tonnes, a sharp drop from the over 12,000 tonnes imported in April. Since January 2018, the US has reported average imports of around 8,000 tonnes per month.

Net exports are likely to stay strong into the second half of this year, as derivative production in South Korea – as well as regional trade commitments to Mexico and Canada – increase as global economies reopen.

Despite recent price advances, MX spreads with downstream commodities – particularly paraxylene (PX) – have remained weak for months. The spread between US MX and PX spot values has narrowed in July, closing to a mere $42/tonne the week of 17 July. Sliding PX demand has sent values lower, subsequently converging with steadily increasing MX and gasoline prices.

Demand recovery for PX via STDP units at refineries will be slim into the second half of the year, keeping on-purpose MX consumption at bay for the foreseeable future. A viable spread to encourage such consumption typically lies around $125/tonne. 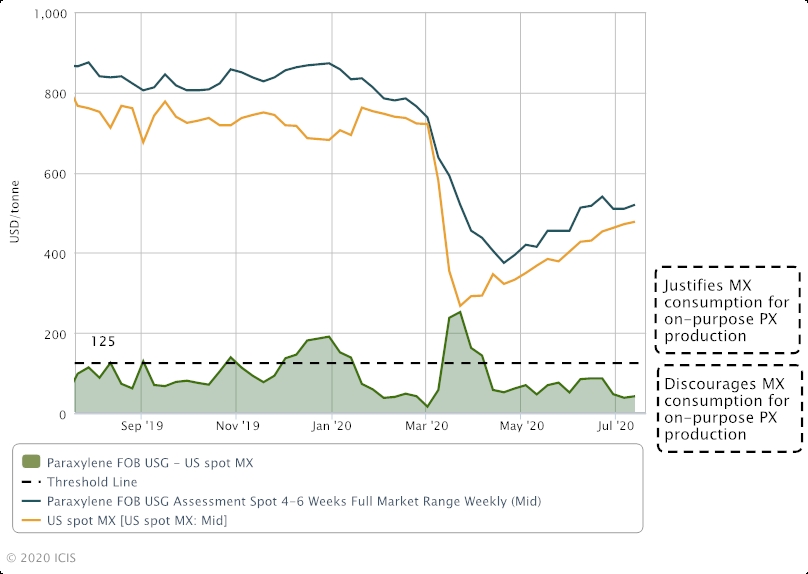 MX is traded in two grades. Isomer-grade xylene is mainly used as a feedstock for PX and orthoxylene (OX) production, while solvent-grade xylene is used as a raw material for dye, organic pigment, perfume and medicines, as well being used as a general solvent for paint and agricultural pesticides.