Hurricane Laura shuts 84% of US oil output in Gulf, one-third of SBR capacity

HOUSTON (ICIS)–Hurricane Laura has led to companies shutting down at least a third of synthetic rubber capacity in the US and more than 84% of oil production in the Gulf of Mexico.

Hurricane Laura is expected to make landfall by Thursday near the border between Texas and Louisiana, home to many petrochemical plants and refineries.

By then, it should be a major hurricane with wind speeds of at least 111 miles/hour (179 km/hour), according to the National Hurricane Center.

OIL SHUT-INS
By midday on Wednesday, companies had shut-in 1.56m bbl/day of US oil production in the Gulf of Mexico, 84.3% of the total, according to the Bureau of Safety and Environmental Enforcement (BSEE). Gas shut-ins totalled 1.65bn cubic feet/day, 60.95% of the US total in the Gulf.

Companies have evacuated 299 production platforms, 46.5% of the 643 manned platforms in the Gulf of Mexico.

Platforms produce oil and natural gas offshore. Unlike drilling rigs, which typically move from location to location, platforms stay in place throughout a project’s duration.

The Gulf of Mexico hosts several offshore oil wells, accounting for 17% of the nation’s crude production, according to the Energy Information Administration (EIA). The region is home to more than 45% of its refining capacity and 51% of its natural-gas-processing capacity.

Oil prices continued to rise in response to shut-ins.

However, US futures prices for natural gas fell slightly amid long supply. Laura could cause demand to fall from shutdowns at plants, refineries and liquefied natural gas (LNG) terminals.

CHEMICAL PLANTS AND REFINERIES
Hurricane Laura has led to a wave of plant shutdowns as companies prepare for the storm.

US styrene butadiene rubber (SBR) producers Goodyear, Lion Elastomers and Arlanxeo have shut down their sites in southeast Texas, according to market sources.

All of the sites are within Jefferson and Orange counties, which are under mandatory evacuation orders.

They represent 34% of US SBR production capacity, according to the ICIS Supply and Demand Database.

SBR is used to make tyres.

In addition, Excel Paralubes and Motiva have shut down their base-oils operations. These plants represent 29% of total US base oil refining capacity, including rerefined material. They represent 42% of Group II base oil capacity in the US.

Base oils are used to make engine oil and other lubricants.

INEOS Styrolution is shutting down its styrene plants in Bayport, Texas, and Texas City, Texas, according to a company source.

INVISTA is shutting down it adiponitrile (ADN) and hexamethylene diamine (HMDA) plants in Orange, Texas, the company said.

CITGO is shutting down its refinery in Lake Charles, Louisiana, according to sources. The company was not immediately available for a request for comment.

ExxonMobil’s refinery and chemical operations in Beaumont, Texas, are running at reduced rates in anticipation of the hurricane, the company said. Its refinery in Baytown, Texas is operating normally.

Chevron Phillips Chemical is shutting down its high-density polyethylene (HDPE) plant in Pasadena, Texas, according to a filing with the Texas Commission on Environmental Quality (TCEQ).

RB Fuels is shutting down its biodiesel plant in Port Neches, Texas, according to a filing with the Texas Commission on Environmental Quality.

INEOS is shutting down its cracker in Chocolate Bayou, Texas, according to a filing with the Texas Commission on Environmental Quality (TCEQ).

Lucite is shutting down its methyl methacrylate (MMA) plant in Beaumont, Texas, the company said.

Phillips 66 shut down its base oil production in Lake Charles, the company aid.

Sasol shut down its Lake Charles plants ahead of the storm, the company said.

Total said it is shutting down its refinery in Port Arthur.

Valero is also shutting down its refinery in Port Arthur, sources said.

Motiva Enterprises is shutting down its refinery and cracker in Port Arthur, according to filings made with the TCEQ.

Louisiana Pigment Company (LPC) said it is is shutting down its titanium dioxide (TiO2) plant in Lake Charles, Louisiana. The company is a joint venture between Kronos Worldwide and Venator Materials.

BASF Total’s cracker in Port Arthur was already down before the storms.

A table at the bottom summarises some of the major chemical plants along the Gulf Coast.

Cameron LNG in Louisiana has planned for reduced rates ahead of Hurricane Laura, while Cheniere’s Sabine Pass suspended operations.

The following map shows the forecasted path of Laura. 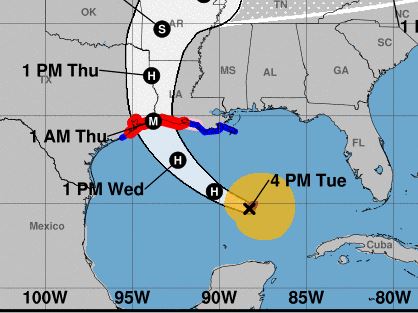 In response to the storm, Jefferson county in Texas and Calcasieu parish in Louisiana have each issued mandatory evacuation orders.

Jefferson county is home to Beaumont, Port Neches and Port Arthur. Calcasieu is home to Westlake and Lake Charles.

Union Pacific is shutting down its intermodal terminal in Avondale, Louisiana, it said.

Another railroad company, BNSF, said it is holding all New Orleans-bound trains from moving into the area and re-routing traffic as needed.

The CSX terminal in New Orleans has been evacuated and inbound traffic is being diverted to Pensacola, Florida. CSX expects to resume normal operations in New Orleans by the end of the week.