The plan comes after the French government announced an economic recovery plan due to the coronavirus outbreak of €100bn, including €30bn entirely devoted to ecological transition.

The newly released hydrogen strategy outlines spending commitment of €7bn for scaling up low-carbon hydrogen between 2020-2030.

The strategy lists three main hydrogen focus areas where the money will be used: industry, transport and research.

€2bn will be made available for industrial electrolysis projects by 2022.

The primary focus for hydrogen production in the strategy is to decarbonise France’s industrial processes, the main source of demand for hydrogen in France.

Currently industrial consumption of hydrogen is 900,000 tonnes. This hydrogen causes the release of 9 million tonnes of CO2 per year as the majority of it is produced using fossil fuels.

The strategy aims for 6.5GW of electrolyser capacity by 2030, however does not mention additional renewable capacity to meet new demand.

Nonetheless, the electrolysers have been earmarked for carbon-neutral hydrogen production which will likely be powered by either renewables or nuclear, with supply to be used to decarbonise industry, with an ambition to cut annual emissions by 6 million tonnes of CO2/year by 2030.

Decarbonising transport is also a key aspect of the strategy, with reference to light commercial vehicles and heavy goods vehicles, as well as use for buses, trains, ships and even hydrogen-powered aircrafts by the 2030’s.

Lastly, the third focus of the strategy’s spending allocation will be to build out research and development.

The development of the carbon-neutral hydrogen sector is anticipated to have a bullish effect on the French power market, once projects come online in 2023 or after.

French power prices should increase, due to the additional power demand needed to produce hydrogen from renewable energies or nuclear energy.

France is aiming to reduce its current nuclear generation share from around 70% to 50% by 2035, involving the closure of 14 units. A decision on whether to build any new capacity has been delayed to 2022.

Meanwhile, French onshore and offshore wind capacity is expected to grow to a combined total 44.1GW by 2030 from current 17.7GW, according to ICIS Power Horizon model. Installed solar capacity is forecast to reach 40.9GW from current 13GW in the same time frame. 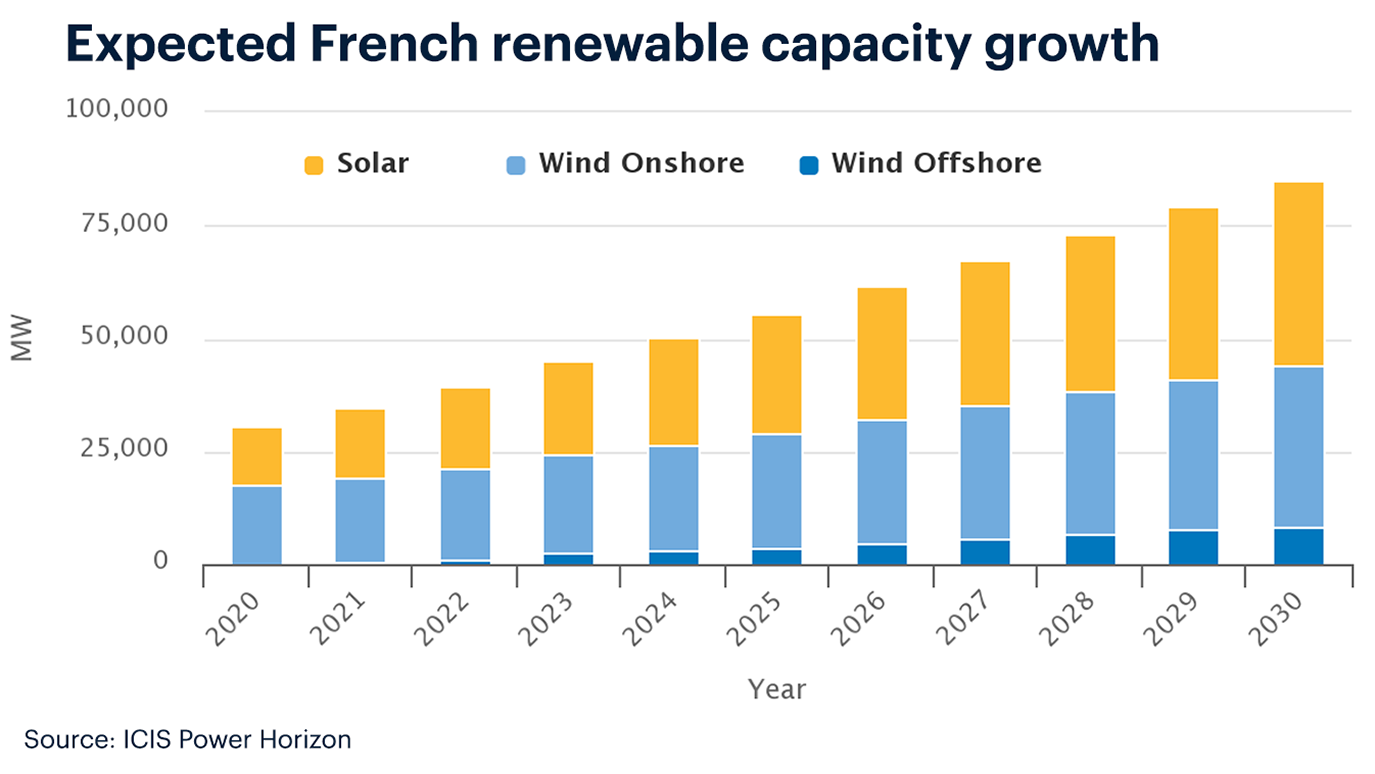 As demand rises, France will need even more installed renewable capacity, otherwise hydrogen production could rely on fossil-fuel generated power, according to one power trader.

Other market sources remain unsure about the effect the hydrogen strategy will have on the French power market.

Moreover, with the current volatility in the carbon market, traders cannot predict price moves in the long term, a second trader said.

The ICIS Power Horizon model base case forecasts French power prices to rise in the next nine years even before the hydrogen strategy was announced.

The French hydrogen strategy pledges the highest amount of electrolyser capacity in Europe by 2030, compared to the Dutch, Portuguese, Spanish and German strategies also recently released or outlined.

These strategies together amount to a total of 22GW of installed capacity by 2030, just over half of the 40GW expected by the European Commission outlined in its own hydrogen strategy.

There is a clear siding with carbon-neutral and potentially green hydrogen produced via electrolysis and renewable energy in the French strategy, with little mention of blue hydrogen, namely hydrogen created via methane reformation and carbon capture and storage.

This follows the current European trend of betting on green hydrogen, with few countries so far only acknowledging that blue hydrogen will be a short-term measure.

POLICY SUPPORT
The strategy also highlights a push to enable the uptake of green or low-carbon hydrogen, referencing contracts for difference while the cost of hydrogen comes down with scale.

There is also a strong focus on removing current regulatory obstacles and financial barriers, stating a commitment to work with the European Commission as part of its coronavirus recovery plan.

TARGETS
The French government’s goal is to become the first major low-carbon economy in Europe, reaching carbon neutrality in 2050.

The country aims to reduce more than 6 million tonnes of CO2 per year from 2030, which is equivalent to Paris’s annual CO2 emissions.

The ministry also set 2035 as a deadline for the manufacturing of a hydrogen aircraft.

On 10 September, French utility ENGIE announced it has signed a cooperation agreement with hydrogen specialist ArianeGroupe in the field of renewable liquid hydrogen to accelerate the decarbonisation of heavy-duty and long-distance transportation.