Tropical Storm Delta continues to strengthen in US Gulf

HOUSTON (ICIS)–Tropical Storm Delta continues to gain strength as it makes its way toward the US Gulf, and meteorologists with the National Hurricane Center expect the storm to reach hurricane strength before making landfall on the US Gulf Coast later this week.

While the exact path of the storm remains uncertain, the most recent update on Monday afternoon called for increased risks of storm surge, wind and rain from Louisiana to the Florida panhandle beginning Thursday night or Friday evening.

The following map shows the forecasts path of Delta, which has sustained winds of 70 miles/hour. 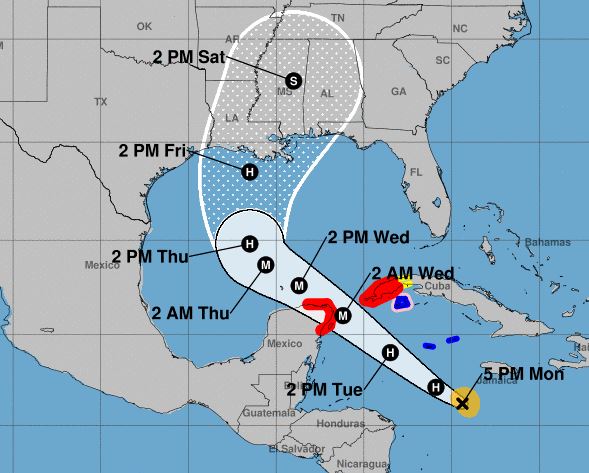 If Delta continues on its projected path, oil companies are likely to evacuate production platforms and shut-in wells.

As of Monday, the US Bureau of Safety and Environmental Enforcement (BSEE) had not started tracking outages or shut-ins as the storm is still too far to the south. However, it was heard that one of the oil majors had begun evacuating some personnel from offshore rigs.

The Gulf of Mexico hosts several offshore oil wells, accounting for 17% of the nation’s crude production, according to the Energy Information Administration (EIA).

Other actions that are likely to occur if Delta approaches Louisiana is that ports could shut down and railroads could divert trains. New Orleans could close its flood gates as a precaution, which would prevent any interchange among railroad companies with eastern carriers.

Louisiana is home to many petrochemical plants and refineries throughout its length. The storm could cause some of these plants to shut down as a precaution. They could remain offline if strong winds cause power outages.

Several chemicals and plastics such as polyvinyl chloride (PVC) and monoethylene glycol (MEG) remain tight because of previous shutdowns caused by Hurricane Laura.

Lake Charles, Louisiana, which took a recent hit from Hurricane Laura, is in the western part of the state and is not in the projected path of Delta at present.

If Delta makes landfall on the US Gulf Coast, it would be the fifth named storm to make landfall this season.

Hurricane season ruins through the end of November.

Click here to view the US Gulf storms – impacts on chemicals topic page.