SINGAPORE (ICIS)–China’s chemical markets in September were generally buoyed up by firm demand due to pre-holiday restocking and tight supply for some products.

Twenty of the 33 petrochemicals tracked by the ICIS China team had price increases in September from August, eight of which rose by more than 10% with the strongest growth logged by propylene oxide (PO) at 37%.

Thirteen products posted price declines, five of which had more than a 5% slump.

PO is included in the 17 products that comprise the ICIS China Petrochemical Index. 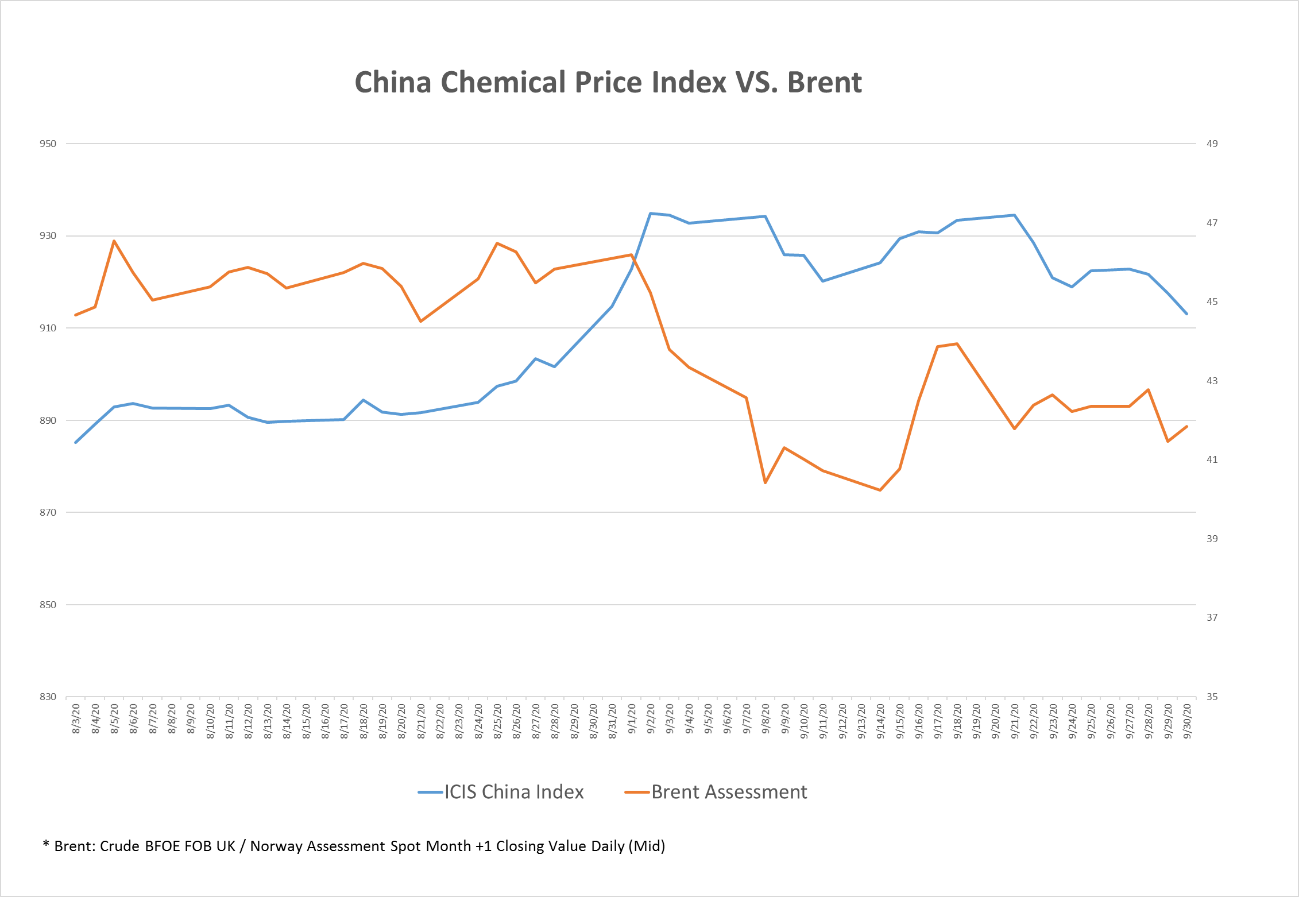 The index spiked in early September, with some narrow fluctuations noted until some weakness set in toward the end of the month.

Spot prices of PO, methyl methacrylate (MMA), n-butanol and bisphenol-A (BPA) rose on the back of healthy demand; while those of butadiene (BD), vinyl acetate monomer (VAM) and acetic acid increased largely due to tight availability of supply.

External market conditions have had some influence on products such as acetic acid and VAM, as well as BD.

China’s exports of acetic acid and VAM were strong in September, while imports of BD was curtailed by tight regional supply.

Unplanned domestic plant shutdowns have tightened supply of some products in September, but market players are generally concerned about a possible oversupply when four integrated petrochemical complexes in the country start up toward the fourth quarter.

Some of the key downstream plants of Zhongke Refinery and Petrochemical and Sinochem Quanzhou, including PE, PP and MEG came on stream in end-September, with commercial production expected in October.

In terms of demand, pre-holiday restocking was a bright spot for September, providing a short-term support for some products like MMA.

MMA demand was up by about 15% from normal levels in September before waning, closer to the October holidays.

The Chinese markets are closed for the Mid-Autumn and National Day celebrations on 1-8 October.

In the fourth quarter, peak domestic travel during the long holiday, as well as consumption-boosting events such as the Double Eleven (11 November) and year-end promotions should help buoy up demand for petrochemicals.

Economic data in September were encouraging, with the manufacturing purchasing managers’ index (PMI) on its seventh month of expansion.

China’s retail sales in September also posted growth for the first time this year, led by communication equipment, cosmetics, and goods related to sports and entertainment as well as cultural and office supplies.

September retail sales inched up by 0.5% year on year, from a 1.1% contraction in August.

China’s total consumption of goods and services in the two weeks to 27 September increased by 7.4%, based on data from a third-party payment platform.

Seasonal demand with the onset of winter should help the apparel and textiles sector but this is not expected to be as strong as in the previous years.

Textile raw materials PTA and MEG had the steepest price falls in September.

For methyl tertiary butyl ether (MTBE), xylene and mixed aromatics, blending demand will be constrained by weaker consumption of downstream gasoline at the end of the summer season.

An expected improvement in construction and agricultural farming activity should boost diesel consumption.

Market players are hopeful of more stimulus policies as consumption, although improving, is far from pre-pandemic levels.