LONDON (ICIS)–The pandemic has hastened the International Energy Agency’s (IEA) outlook for the demise of crude oil as a motor fuel although it forecasts reasonable demand growth from the petrochemicals industry which looks set to continue to enjoy cheap feedstocks, a lack of competing material and a failure by the world to adopt recycling seriously.

The forecast was included in the IEA’s annual World Energy Outlook, which this year was obviously marked by the pandemic’s hit to the crude oil industry, and looks set to end the year at 2013 levels according to the IEA in its September report.

The small uptick for the petrochemicals industry becomes notable when compared to most other sectors; the world’s demand for crude oil stood in 2019 at 100m bbl/day, including all industrial sectors, a figure which according to the IEA will never be achieved again (see bottom table).

By 2040, and thanks to the electrification of transport becoming the norm, demand is expected to stand at 73.6m bbl/day.

Another telling statistic: in 2019, industry and petrochemicals represented 19% of crude oil demand; by 2040 they will account for nearly a third (29%).

Even major producer the industry, like BP, have also said that the pandemic – the first global health emergency of the hydrocarbons age, and possibly its last – will peak in this decade as China or India make advances on renewables.

PETCHEMS – STAY PUT
Readers in Europe are probably the most accustomed to the recycling of plastics; but Europe accounts for a small portion of the world’s population, is a mature economy and urbanisation happened decades ago.

Think now of China, India, Brazil, Nigeria, or Indonesia – together nearly 3.5bn people. Large rural populations are set to move to cities where consumption habits are all linked to plastics.

And now think about the (poorly developed, in many places) recycling systems – indeed, petrochemicals may save the decaying crude oil industry, but it is unlikely that the environment will be grateful for the extra waste or energy used to produce those plastics in the first place.

Developers of hydrocarbons in the mid-20th century may never have imagined that petrochemicals would become the most resilient industrial sector sustaining crude oil demand going forward.

“While road transport accounted for 60% of oil demand growth in the last decade, petrochemicals will account for 60% in the next decade, largely as a result of rising demand for plastics, notably for packaging materials,” said the IEA.

“The dramatic changes in consumer behaviour in 2020 have a limited overall effect on oil demand in the long run, although aviation takes a while to recover to pre-crisis levels.”

Moreover, the pandemic has left a renewed worries about hygiene, and plastics are seen by consumers as the safest bet; with gas-based polyolefins plants expanding in North America and the Middle East at pace, cheap prices are guaranteed for decades to come.

“[Within petrochemicals] Demand for some construction materials remains relatively subdued but may be stabilised in countries where construction is stimulated by economic recovery packages. Market uncertainty means that few industries expand production capacity in the short term.”

FALLS IN 2020, QUICK RECOVERY THEREAFTER
The Paris-based agency expects crude oil demand for petrochemical feedstock to fall 3% in 2020 as the second-quarter lockdowns across the world took a heavy toll on industry.

However, from 2021 onward, demand for crude from the industry will recover “fairly quickly”; changes in consumers’’ habits may take years to become apparent, but one of the likely lasting changes brought about by the pandemic is e-commerce, which as long as new materials are not developed is set to benefit plastics.

“Petrochemicals cement its position as the largest driver of future oil demand growth, accounting for nearly 60% of total growth to 2030, and three-quarters to 2040,” said the IEA.

“Lighter products such as ethane, liquefied petroleum gas (LPG) and naphtha account for three-quarters of the growth in total oil products in the period to 2030.”

RECYCLING: SLOW EXPANSION
The IEA did take into account the potential effect of recycling in demand for crude oil; it conceded that in 2020 there have been some “temporary setbacks” but adding that the longer-term case for action remains unchanged.

“Recycled PET [polyethylene terephthalate] was traded at a premium to virgin PET amid low oil prices [at the beginning of the pandemic], suggesting an undeterred appetite for recycled products, while infrastructure for waste management and recycling featured in some of the stimulus packages that have been announced [by governments],” said the IEA.

But the Agency concedes that the actions taken in some developed economies which have already approved recovery packages are likely to be a drop in the ocean; nearly as small of a drop as that of bans in single-use plastics in certain countries, which would be more symbolic than practical.

“It is however likely to take more than this to make a strong dent in demand, not least because the items targeted for a ban on single-use plastics (e.g. plastic bags, straws and disposable cups) do not represent a large volume of overall demand.”

The reason, again, that relentless urbanisation in emerging countries. Although Europe recycles most of its plastics, the global average recycling collection rate is set to increase “only modestly” to around 20% by 2040.

The explanation for this is, according to the IEA, that most of the demand growth will occur in emerging economies where recycling infrastructure is underdeveloped.

“Measures to tackle plastic waste curb oil demand for petrochemicals by around 400,000 bbl/day in 2030 compared to what it would otherwise have been,” said the IEA.

REFINERS’ FUTURE
Crude oil majors have long understood that their business model is one destined to fail, from private corporations like BP or Shell to state-owned like Aramco: the world will not run out of crude oil as it used to be taught in the most schools’ curriculum until a few years back.

But refiners are also convinced that petrochemicals still have a few decades of glory ahead, so the IEA touched on those companies that are betting on “refining petrochemical integration”, with some facilities already operating.

“The first wave of integrated facilities (e.g. Hengli and Zhejiang phase 1 in China) started operations in 2019 and showed resilience during the crisis. While companies need to withstand a period of capacity overhang in the petrochemical market, some players with deep pockets may well pursue this pathway with the strategic aim of securing long-term competitiveness,” said the IEA.

“For example, plans for several plants that convert crude oil directly into chemicals have recently been announced in China, India and Korea, following on from the first such facilities in Saudi Arabia.”

Demand for crude oil by regions and sectors 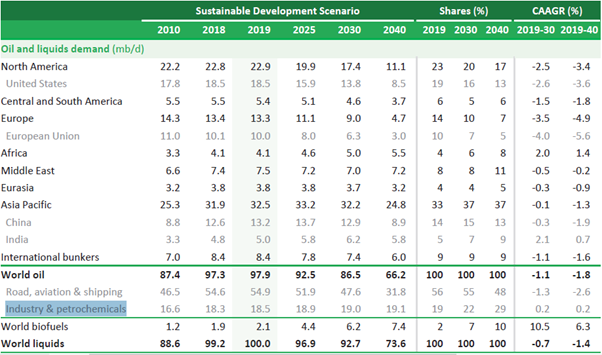 *IEA’s Sustainable Development Scenario is the most optimistic, and assumes countries will act decisively and without pause to limit global warming

Demand for crude oil by regions and sectors 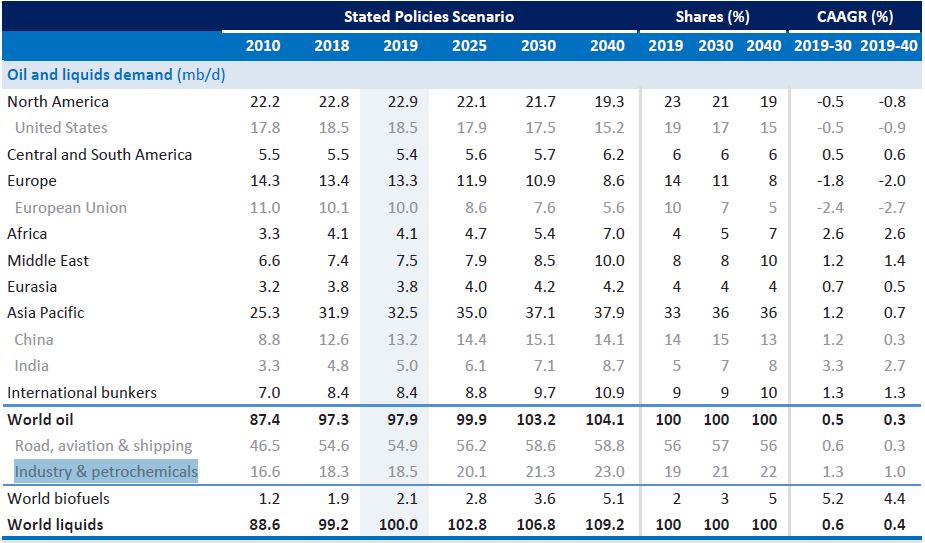 The third, and already unlikely, is the Current Policies Scenario (CPS) in which fossil fuels would continue to be the main source of energy; renewables are already changing that in many parts of the world

NEXT DECADE: FAMILIAR LOOK
While the IEA dreams about a world in which sustainability is the most important aspect when elaborating policies, it is also realistic and assumes that at least the next 10 years will look like the preceding 10.

It is in the below graphic where we can see how the 2020s will still be dominated by crude oil; demand only falls in buildings as heating becomes greener, plateaus in passenger cars and shipping.

In all other sectors, demand for crude is set to rise, with petrochemicals at the centre. 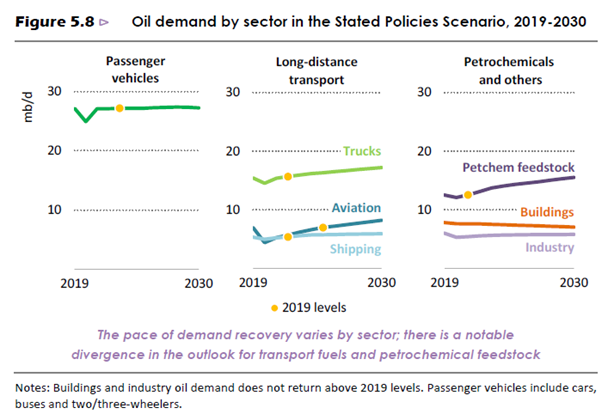