US MDI markets tightening on shortages for isocyanate precursors

Dow and Covestro have recently declared force majeure at their US MDI plants while Huntsman is experiencing a partial shutdown at its MDI plant in Geismar, Louisiana, with all three producers pointing to raw material shortages as the main cause of their reduced operating rates.

The impacts of hurricanes Laura and Delta on the US Gulf has resulted in some tightness for some MDI intermediates.

While the hurricanes brought about no major impacts on any US Gulf MDI sites, plants producing intermediate chemicals such as aniline, nitrobenzene and chlorine were impacted.

Logistics were also interrupted due to closures at railyards and waterways, which also resulted in limitations to intermediate supply to isocyanate plants.

According to data from the Chlorine Institute, operating rates at US chlor-alkali plants have been at multi-year lows since the start of the coronavirus outbreak, with operating rates turning lower in September from August.

Westlake’s 1.29m tonnes/year chlorine plant in Lake Charles, Louisiana has experienced a prolonged outage owing to the disruption to chemical operations in the Lake Charles area caused by the impact of Hurricane Laura, which left much of the area without electricity for several weeks.

Shortages of carbon monoxide (CO) have also played a role in the recent tightness in the MDI industry.

Chlorine is combined with CO to produce phosgene, which is reacted with methylenedianiline (MDA) to produce MDI.

Shortages impacting these intermediate chemicals have pressured MDI operating rates in North America lower even as demand for MDI and downstream polyurethane systems has been strengthening.

MDI demand recorded a strong recovery in the third quarter after a sharp decline in consumption during the second quarter during the period of strictest coronavirus-related restrictions on economic activity.

The automotive sector has seen a significant rise in operating rates in recent months as producers of vehicles and vehicle components are working to refill their supply chains after operating rates throughout the industry were reduced to record low levels in April and May.

Demand for home appliances has also moved higher in recent months as consumers are spending much of their disposable income on home improvements as travel and entertainment spending has been deferred.

The construction sector has also been a strong spot for MDI demand, with residential construction activity seeing an uptick as some home buyers are opting to larger homes in the suburbs in preference for urban housing.

MDI is consumed mainly in polyurethane foams, which account for about 80% of global consumption. Rigid foams, the largest outlet for MDI, are used mostly in construction, refrigeration, packaging and insulation. MDI is also used to make binders, elastomers, adhesives, sealants, coatings and fibres.

Major US MDI producers include BASF, Covestro, Dow and Huntsman. 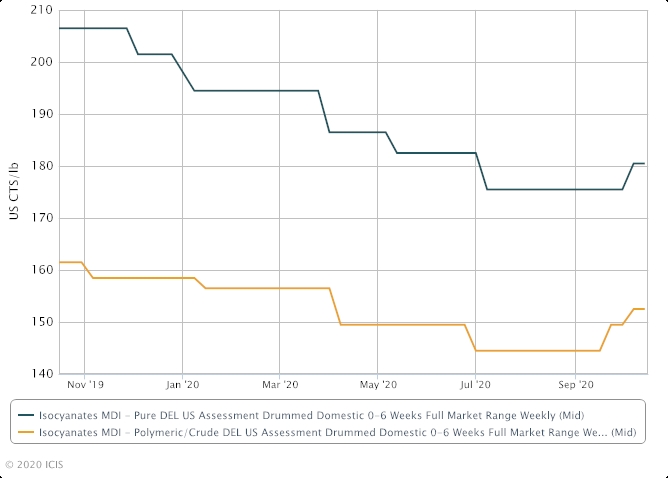