Home News INSIGHT: Pandemic could accelerate the decline of globalisation

INSIGHT: Pandemic could accelerate the decline of globalisation

LONDON (ICIS)–The onset of the coronavirus pandemic has hastened the change from a globalised world order towards more regional systems of trade, amid a near-collapse of global travel and heavy challenges for supply chains, according to a partner of the World Economic Forum (WEF).

The coronavirus outbreak was a global event that has largely been handled on a national basis, with some countries closing borders to prevent the spread of infection and global supply lines struggling to maintain cohesion in the face of the strain placed by lockdowns.

The urgency of securing vaccine supplies to allow normal life to resume has led to government jockeying for orders, often against each other, with NGOs warning that the developing world is being left behind in the competition among advanced economies for vaccines.

“It is unlikely to see a return to the previous wave of hyper-globalisation that we had,” said Guillaume Barthe-Dejean, chairman of the director’s office at SK Holdings, speaking at a WEF event.

“This is very much a global crisis but it did not prompt a global response.”

Geopolitical events such as the US-China trade war, the collapse of the Iran nuclear deal, and the UK’s break from the EU have all served to refocus governmental attention at home, while the pandemic exposed the vulnerability underlying the just-in-time supply chains established over the last couple of decades.

Some chemicals sector executives, such as France’s Arkema CEO Thierry Le Henaff, have noted that the signs of growing regional consolidation were already present before the pandemic.

Others, however, have claimed that the idea of retrenchment is more a political than business factor, with chemicals trade continuing to be global.

Coronavirus did cause substantial issues in chemicals value chains throughout 2020, with China lockdowns affecting the automotive sector and the extremely tight restrictions in India impacting on pharmaceutical intermediates, and quarantine rules hitting intra-European trade.

“What I do think we will see now is an attempt to remodel globalisation and move toward a regionally based world economy and one that better balances national and international interests, between efficiency and… resiliency,” said Barthe-Dejean.

“I think regionalism is a model of economic integration that may emerge as an attractive  political and economic halfway house between an overextended hyper-globalisation that has failed the global stress test and the rise of nation states that [present] challenges of protectionism and  conflict,” he added.

SYSTEMIC RISK
Barthe-Dejean was speaking at a WEF event to launch the group’s 2021 global risk report, based on a survey of politicians, NGO representatives, industry executives, and other stakeholders.

The pandemic loomed large for the year, with societal pressures making up the bulk of perceived threats through to the end of 2023.

Disease, unemployment, and the breakdown of social cohesion were seen as among the biggest threats, with cybersecurity and digital inequality also key factors.

“[The risks are] not just the health crisis, also the unemployment crisis that has been induced by the recession,” said Saadia Zahidi, managing director of the WEF.

The longer-term effects of the economic hit taken during the ongoing crisis and the spending governments have poured into countries since early 2020 are expected to come to the fore in the mid-term. 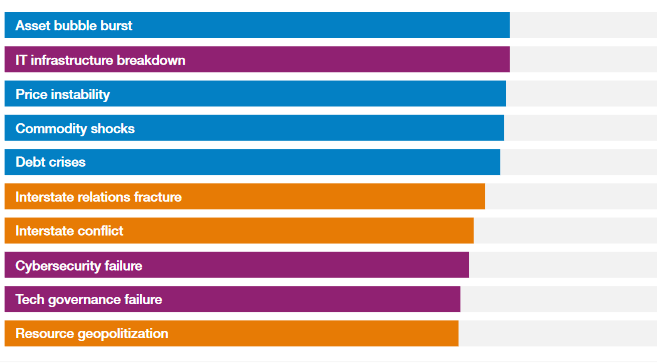 Key identified risk factors in the next three to five years
Source: WEF

PANDEMIC IMPACTS TO CONTINUE FOR YEARS
Price instability, asset bubbles, commodity shocks and debt crises were all identified as the longer-term consequences of the pandemic, as well as breakdowns in relationships between states and increasing geopolitical tensions around resources.

The tensions and stresses of the first half of the new decade could lead to state collapse for some economies, as well as the potential for weapons of mass destruction to be used, according to the survey.

Climate change has dominated the landscape on perceptions of systemic risk for years, with green issues such as loss of biodiversity and extreme weather taking up the bulk of the key worries for survey respondents last year.

The issue remains on the radar for industry, policymakers and NGOs, but has slipped behind the more extreme potential impacts of the pandemic.

Both a backlash against science and adverse technological innovation were perceived as key long-term risks, highlighting unease both about the backlash against vaccines and safety measures during the pandemic, and the fear of the impact of new technologies outpacing regulatory response. 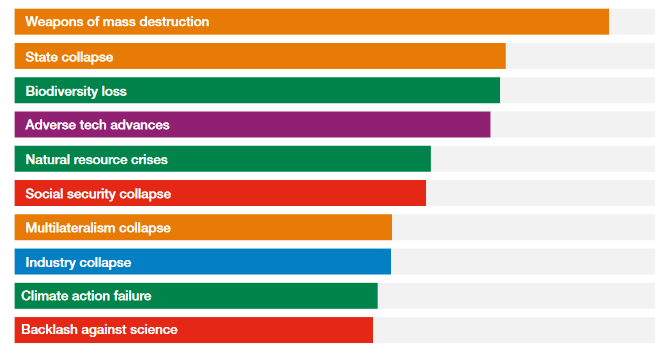 REMOTE DIVIDE
The pandemic has exposed a new economic fault line, between workers who can telecommute and those who must be physically present in a place for their jobs, which has afforded remote workers a far higher degree of safety than those who have to appear in person.

This is a key issue for chemicals as well. Workers in the European chemicals sector tend to be relatively well-paid, but chemistry is not derivatives trading. Physical product is manufactured and delivered, in shops, trains, trucks or plane.

Firms have learned how to make factory environments safer in the pandemic, but the current crisis could be a harbinger of subsequent dramas, be they biological, environmental, or political.

We are already seeing the impact of that shift towards a more regional focus in shipping rates, which have multiplied on strong demand from a resurgent Asia and weaker demand from a Europe still languishing in the pandemic, leading to boats travelling routes empty or traders declining to travel to Europe at all.

While these are acute tensions that may recede over the next few months, it is illustrative of the fact that the industry will need to bear and respond to every kind of risk.

While management may be working from home, a tonne of polypropylene (PP) is a tonne of PP, and shepherding that shipment across the globe – no matter what catastrophes are unfolding – is likely to continue to be a moving target as this tumultuous century unfolds.