LONDON (ICIS)–The shipping woes that have dogged the chemicals sector for months show no sign of abating, with disrupted international trade flows driving up prices and limiting availability, with European issues exacerbated by confusion and gridlock following the UK’s departure from the EU.

Shipping costs have skyrocketed over the last few months, with market sources reporting that they have been quoted six times or more the level seen in mid-2020, when prices first started to climb.

““Every day and week the sea freight costs are going up,” said a European trader. 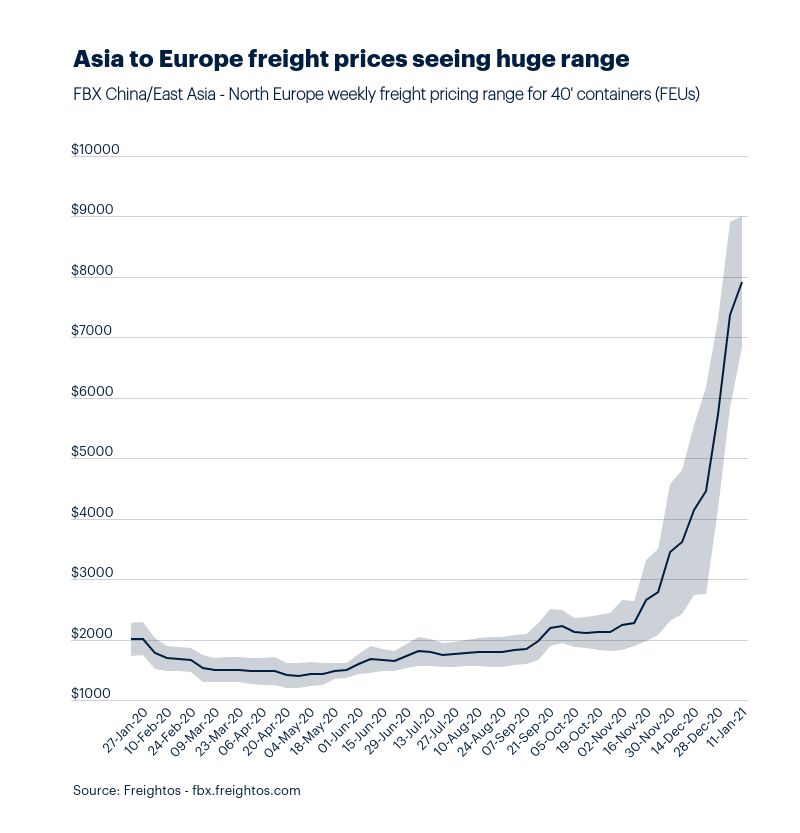 Supply chain disruption in the early days of the pandemic started to drive up costs, but the expense of shipping kicked into a phase of exponential growth from November, as the Asia Pacific region’s economic recovery started to re-map global trade.

“It began in the US then China, then Korea, Indonesia. For some more expensive raw materials I heard people willing to pay $8,000 for product to be sent from Asia to Europe, but there were no containers. It won’t be over in one month… everyone has a shortage, everyone is desperate,” said a polyethylene terephthalate (PET) contact.

A return to near standard production levels in China and beyond, coupled with a sharp increase in online goods orders in Europe, which continues to languish under high infection rates and social distancing measures, has driven up prices, delayed delivery schedules and container shortages.

The extent is relatively unprecedented, according to a plasticizers seller.

Shipments from Asia are being left with no product to load for the return journey, meaning that shippers either need to absorb the cost of a stock-free return journey or for vessels and containers to remain in port until full enough to head back to Asia.

This is causing delays, with the normal rhythm of global trade grinding to a halt and containers are less likely to be where they are needed. It also leading to increased reluctance on both sides to commit to the long ocean journey when it is unclear whether it will be possible to bring the ship back.

“There are no real trans-shipments-within China to Europe… some freight contracts have been cancelled,” it added.

The supply chain imbalances are affecting all markets, meaning that chemicals players are finding themselves fighting for container space for raw materials against importers and exporters of high-margin products such as gaming consoles and televisions.

“Some freight contracts have been cancelled,” said the TiO2 trader. “I think it has to do with a lot of consumer demand/electronics, flat screens have a higher margin than TiO2.”

Players had long expressed hopes that the Lunar New Year holiday in China, taking place in February, would help to alleviate the situation. Chinese factories customarily shut down for the two-week period.

This could potentially allow a lull for ships to move back to Asia and gluts at some European ports to clear.

These hopes may be dashed by signs that controls on travel amid a slight spike in China domestic coronavirus infection rates could result in fewer factory closures than expected, meaning the situation could continue into the next quarter.

The Chinese government has placed various cities and provinces in the northern region back into lockdown on the back of a higher infection levels, including Hebei, Heilongjiang and Beijing.

The extent of demand backlog for shipping containers means that, even in the event of more widespread production stoppages in China, prices could remain significantly higher than normal for some time.

“We saw container rates at… $5,200 for January and $9000 for Feb shipments for Thailand to Antwerp,” said a European epichlorohydrin (ECH) source. “Our supply chain manager says that by March it should normalise, once stranded containers are back, but we don’t see this yet.”

Port congestion and delays due to coronavirus have exacerbated the delays across the globe, with an Africa-based source noting the same issues as suffered in Europe.

“Empty container availability is tight, most cargoes are not turning around as quickly. A lot to do with Covid, there is not enough drivers or dock yard workers,” it said. “Containers go inland and there are not enough drivers to bring it back.”