Home News US BDO ‘on brink of being completely out of control’, contributing to auto supply chain crunch

US BDO ‘on brink of being completely out of control’, contributing to auto supply chain crunch

HOUSTON (ICIS)–Supply of US butanediol (BDO) and derivatives is severely short, and among other issues is contributing to production constraints in the key automotive sector.

In particular, US supply of BDO derivative polytetramethylene ether glycol (PTMEG) is critically short, with an unanticipated government order requiring precedence over contract customers, according to numerous market sources.

PTMEG can be used to make spandex fibres and polyurethanes, such as thermoplastic polyurethane (TPU) elastomers, and urethane adhesives, sealants and surface coatings.

BDO derivative tetrahydrofuran (THF), a precursor to PTMEG, also may be subject to a separate government contract, according to sources, further tightening supply.

THF is the biggest outlet for BDO, in 2020 consuming more than 40% of US BDO production, according to the ICIS Supply and Demand Database.

For 2021 that share is projected to drop to 30%, as a result of the closure of producer Lycra (Shandong Ruyi) in late 2020, which reduced US BDO capacity by about 30%.

Global supply of BDO is extremely tight, with China’s average run rates reaching almost 75%, well above the balance point of 60%, and leading to lower run rates for downstream polybutylene terephthalate (PBT) in the region.

“Demand is incredibly high, and every pound that goes out is going to go somewhere,” said one US seller.

“We’re at the brink of being completely out of control,” said another, describing the fragile market balance.

Shortages of BDO as well as co-feedstock isocyanates and other chemicals could lead downstream plants to go idle.

One downstream plant was running out of BDO, said a buyer, while another was “limping along” due to lack of isocyanates.

The BDO scarcity and strong demand have led to hefty price increase nominations for Q2 contracts of 45-60 cents/lb.

OUTLOOK
The concurrent shortage of isocyanates could limit demand for BDO, and help the market rebalance more quickly.

The company also produces BDO at the site.

The two other US producers were physically unaffected by the storm, but logistics – loadings and transportation – are causing problems, due to driver and truck shortages.

“You can be sitting on material but no one is able to get there” to deliver it, a producer said.

“Auto supply chains will struggle with other polymers and plastics, as well as microchips and other bits, but definitely will with PU chemicals as the volume out is relatively large, and the rest of the world has tightened up,” Peacock said.

AUTOMOTIVE SUPPLY CHAIN TIGHTENS
Shortages throughout the supply chain are forcing automotive plants to lower production and furlough workers, and could even spill into Q2, according to industry experts LMC Automotive.

The impact could be that global production makes only a limited recovery in 2021 compared with 2020, say Jincy Varghese, ICIS demand analyst, and Rhian O’Connor, ICIS senior analyst.

A semiconductor shortage as a result of increased pandemic-related demand for gaming consoles, laptop computers and other technology has slowed automotive production.

The US is among the worst hit by these shortages, as inventory levels are thin, say Varghese and O’Connor.

Ford, FCA, Volkswagen, General Motors, and Honda have all announced temporary factory closures over Q1 across the US, Canada and Mexico.

Oxford Economics estimates this will result in a 230,000-unit hit in the region for Q1. 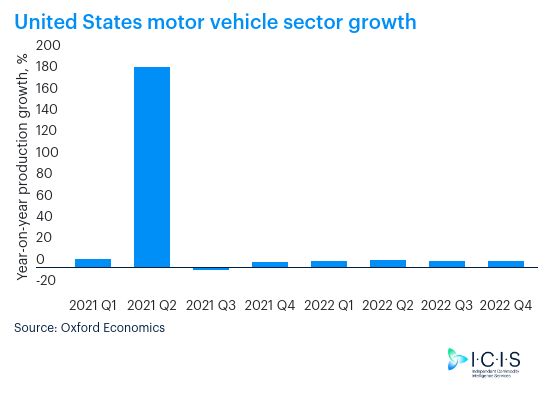 The automotive industry has contributed to the US economic recovery, though to a lesser degree than the construction sector.

US January auto sales were up by 2.5% month on month, but remained lower year on year, according to US Bureau of Economic Analysis (BEA) data.

BDO is a chemical intermediate used in the production of polymers, solvents and fine chemicals.

US BDO producers are Ashland, BASF and LyondellBasell.

Click here to view the Construction – impact on chemicals page.