LONDON (ICIS)–Prior stockpiling and new Brexit trade regulations caused a fall of 40.7% in UK exports to the EU in January, month on month, as the country ended its membership of the 27-nation bloc’s single market, the Office for National Statistics (ONS) said on Friday.

The petrochemicals-intensive automotive sector was hit hard, said the ONS, along with other chemicals-based sectors.

UK GDP during January fell 2.9%, less than analysts had expected, after the UK implemented on 5 January lockdown measures to stop the spread of a new coronavirus variant, shutting most retail venues and keeping most residents confined to their homes.

TRADE SHARPLY DOWN
Alongside the sharp fall in UK exports to the EU, imports from the bloc into the UK fell 28.8%.

Imports from the Netherlands, Germany and Belgium accounted for 76.2% of the UK’s total decrease in imports of chemicals in January, said the ONS.

It added: “Falling imports of goods, excluding non-monetary gold and other precious metals, were largely seen in machinery and transport equipment, and chemicals from the EU in January 2021, particularly in imports of cars and medicinal and pharmaceutical products.”

The fall in January, however, occurred after heavy stockpiling in November and December 2020, when imports into the UK went up sharply “particularly in machinery and transport equipment and chemicals”, said the ONS.

These increases would have been in line with heavy stockpiling as the country prepared to exit the single market.

The ONS said UK goods imports from the EU had also peaked in the weeks approaching previous Brexit deadlines in March and October 2019, adding that it had registered a slight improvement in trade patterns as January went on.

“The proportion of businesses reporting that they were unable to export decreased by 5.4 percentage points between the reporting periods 11 January to 24 January and 25 January to 2 February,” it said.

“Similarly, the proportion of businesses reporting they were unable to import decreased by 3.0 percentage points between the same reporting periods.”

Since 1 January, businesses doing UK-EU trade must fill in new documentation after the two parties agreed a trade deal for goods on 24 December, one week before the deadline.

Sources in UK and European chemicals markets have reported delays, logistical disruption and increased red tape in trade as the trade deal was implemented.

The January trade figures are the first official data calibrating the impact of that trade deal.

The falls in exports to the EU were responsible for an overall fall in UK exports of 19.3% during January, said the ONS; similarly, overall imports fell 21.6%.

UK trade with EU, non-EU countries in January
Month on month; in billion pounds
Click on image to enlarge 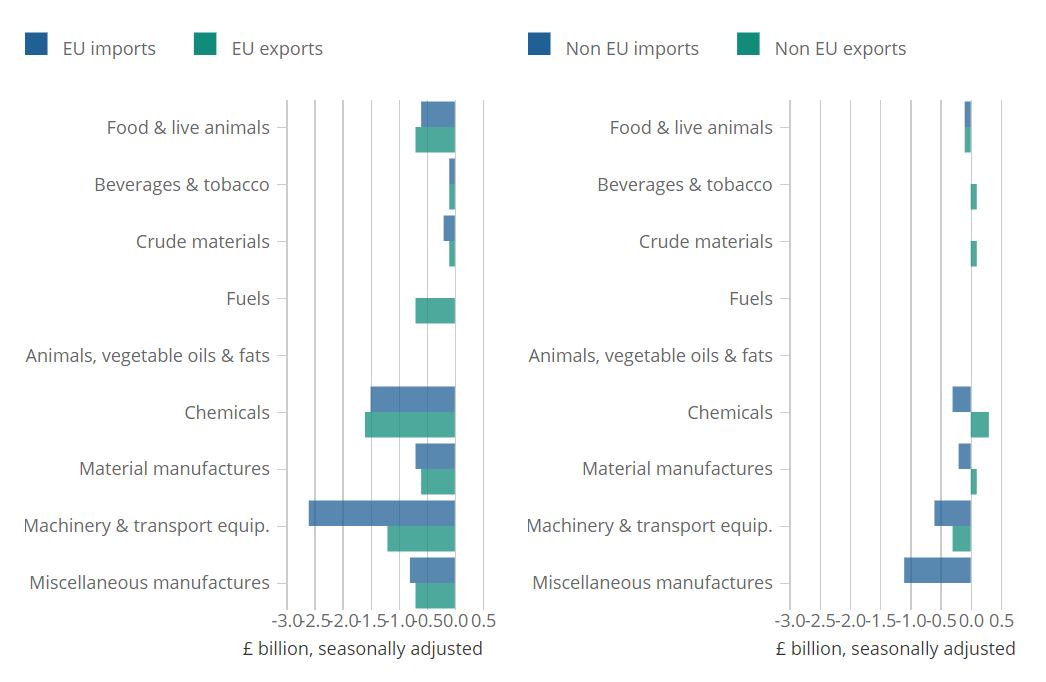 GDP DOWN, CONSTRUCTION UP
The petrochemicals-intensive construction industry’s output increased in January. The sector is not bound by mobility restrictions as the UK government tried to avoid an economic hit like that of the lockdown in the second quarter of 2020.

All other sectors, however, posted shrinking output, although the overall 2.9% GDP fall during the month is smaller than analysts’ expectations for a fall around 5% in economic output in January.

The UK’s economy remains 9% smaller than in February 2020, the last month before the pandemic hit the country. 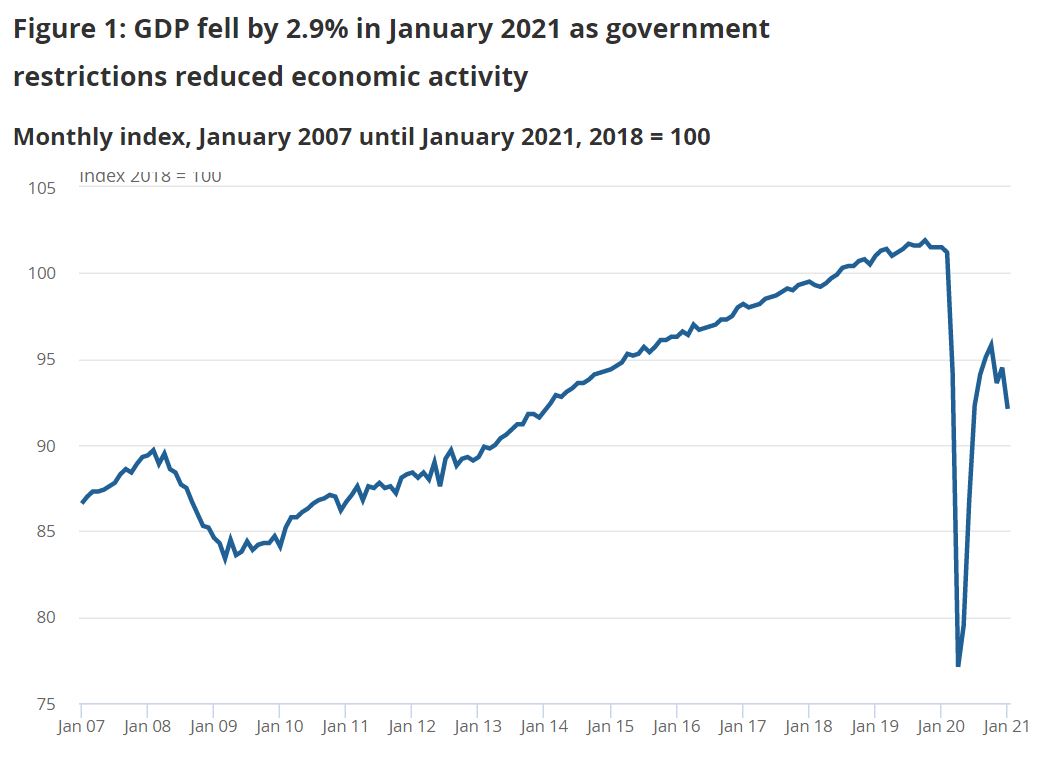