MADRID (ICIS)–Lower-than-expected growth in the world’s two largest economies, the US and China, is expected to dent global growth in 2022 sharply, the International Monetary Fund (IMF) said on Tuesday.

Global GDP growth is now expected at 4.4% in 2022, said the IMF, which is half a percentage point lower than its prior forecast, issued in October 2021.

The IMF, which delayed the publication of its World Economic Outlook by three weeks to assess the impact of the coronavirus Omicron variant, said the world had started the year “in a weaker position” than expected.

The world economy is struggling to leave the pandemic behind, and, because of that, supply chain woes persist and the threat that rich countries could withdraw stimulus this year looms large.

In the US, because of President Joe Biden’s difficulties in getting legislative approval for his multitrillion dollar Build Back Better fiscal package, combined with the withdrawal of monetary stimulus and supply chain woes, growth in 2022 is expected now to be 1.2 percentage points lower than in the IMF’s October forecast.

In China, its zero-COVID 19 policy, causing recurrent industrial shutdowns, as well as the woes in its highly indebted real estate sector, mean growth in 2022 could be 0.8 percentage points lower than previously expected by the IMF.

US GDP is expected to grow this year by 4% and China’s by 4.8% (see bottom table for detailed country information).

The IMF also lowered its growth forecasts for the 19-country eurozone, and GDP is now expected to rise by 3.9% in 2022, 0.4 percentage points lower than the October forecast.

“Rising energy prices and supply disruptions have resulted in higher and more broad-based inflation than anticipated, notably in the US and many emerging market and developing economies,” said the IMF.

FULL RECOVERY: PERHAPS IN 2023
While the IMF downgraded its 2022 growth forecast, it raised 2023 GDP expectations by 0.2 percentage points to 3.8%, arguing next year could be when the world finally leaves behind the health emergency and global trade conditions normalise.

“The upward revision to global growth in 2023 is mostly mechanical. Eventually, the shocks dragging 2022 growth will dissipate and – as a result -global output in 2023 will grow a little faster,” said the IMF.

“The upward revision to 2023 global growth is, however, not enough to make up ground lost due to the downgrade to 2022. Cumulative global growth over 2022 and 2023 is projected to be 0.3 percentage points lower than previously forecast.”

HIGHER DOLLAR TAKES TOLL
As the US dollar is expected to increase after the country’s central bank, the Federal Reserve (Fed), increases later in the year interest rates for borrowing, many countries around the world could suffer from higher-priced dollar-denominated commodities.

Crude oil is still traded in dollars, and lower consumption due to higher prices is a fear crude oil producing cartel OPEC was eager to dispel earlier in January in its monthly report, arguing the northern hemisphere’s summer driving season would offset a higher dollar.

However, the fact is that an appreciated dollar tends to put pressure on emerging economies whose debt and trade is mostly done in dollars as prices increase.

Moreover, a higher dollar also means investments elsewhere in the world can return to US safe, higher-returns assets.

“Although fiscal consolidation is anticipated in many emerging market and developing economies in 2022, high post-pandemic debt burdens will be an ongoing challenge for years to come.”

THE PERMANENT CRISIS
The IMF highlighted how climate change is a continuing and unpredictable threat for which the world may not be yet ready, especially as attention for two years turned to the pandemic.

The IMF argued “major natural disasters” are more likely in years to come and will threaten all economies as seen in the range of extreme weather events like floods, droughts, and wildfires in all regions during 2021.

“The recurrence of such events would deliver a twofold blow that would most harm vulnerable low-income (often low-vaccination) countries, while also further straining global supply chains,” it said.

“Despite the stated ambition at the Glasgow climate conference (COP26), current commitments to reduce greenhouse gases fall far short of limiting the increase in global temperature to two degrees Celsius above preindustrial levels.” 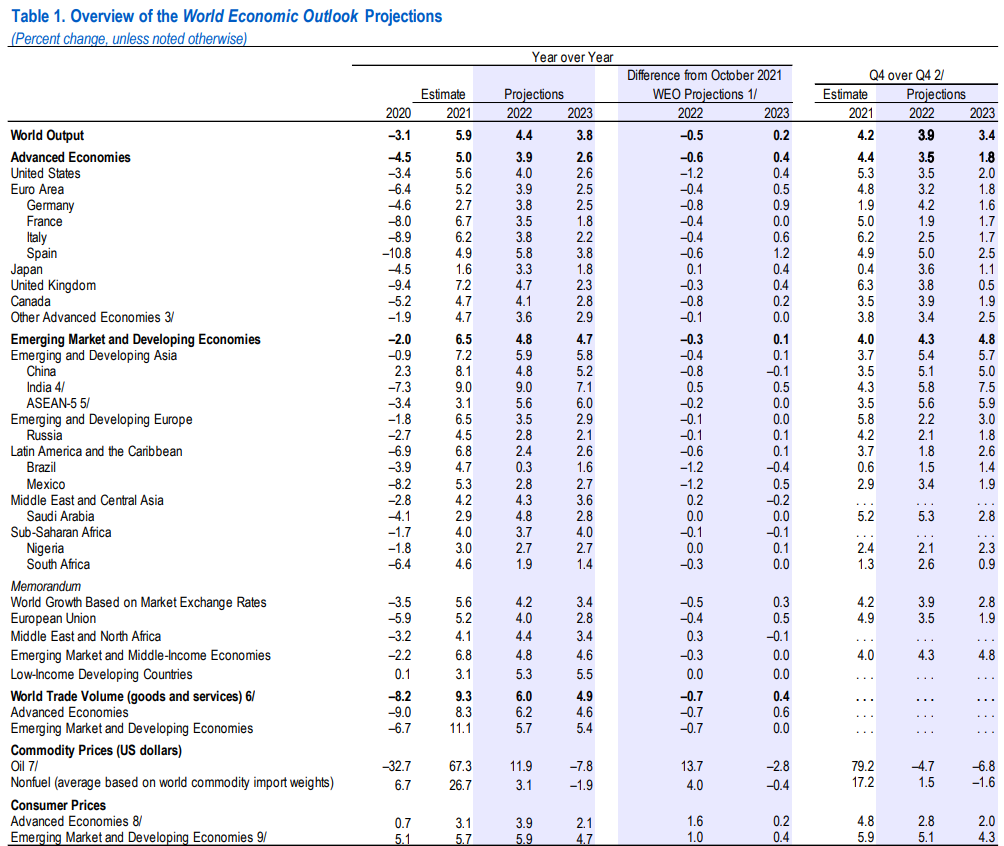