HOUSTON (ICIS)–The US economy is likely to continue expanding at a modest rate into the third quarter of 2022, although the rate of growth has likely peaked, according to the ICIS Leading Business Barometer (LBB). 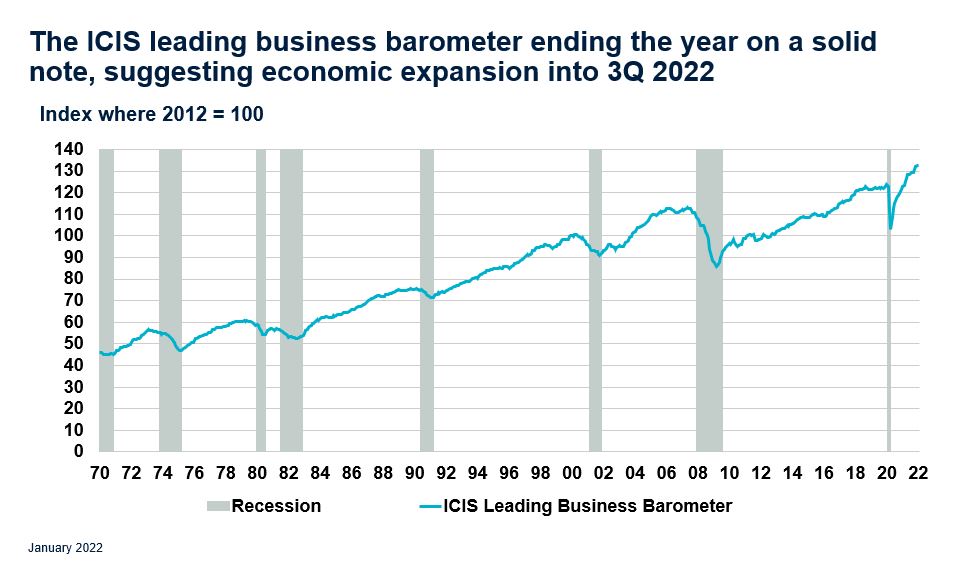 The LBB leads the US business cycle, and the provisional January data indicate a rise of 0.1% from the previous month, flat from the gain in December from November, largely due to uncertainty in equity markets concerning US Central Bank policy, the Omicron variant, and geopolitical tensions.

The uncertainty contributed to diffusion (the share of expanding indicators) falling in January from 65% to 59%.

“The LBB was up 8% year over year in January, but below year-earlier comparisons several quarters ago,” said ICIS senior economist Kevin Swift. “In summary, the latest reading is consistent with expansion of the US economy into 3Q 2022, but growth has clearly peaked with more modest growth ahead.”

January data was generally positive for production-related indicators among materials and other industries that are sensitive to cyclical fluctuations.

Trends in construction-related materials improved, as did materials used in other durable goods, Swift said.

Materials used in packaging and for consumer and institutional applications were also positive.

Performance chemistry for industry gained, as did exports, according to the data.

Raw material and other input prices also rose, as did selling prices.

“Relative equity prices, however, are very weak and a deeper rout in equity markets will weigh on the LBB,” Swift said. “Inventory and other broader leading economic measures were positive.”

Monthly data on the ICIS LBB are available back to January 1947.

Fire hits Pertamina refinery in Indonesia on 15 May; repair to take a week