SINGAPORE (ICIS)–China has been easing its nationwide implementation of vehicle-use ethanol gasoline since 2020 due to tightening supply of feedstock stale grains.

Ethanol gasoline in the country is currently a combination of 90% gasoline and 10% ethanol, also known as E10.

So far, out of 31 provinces in mainland China, only 15 provinces have fully or partially implemented ethanol gasoline. 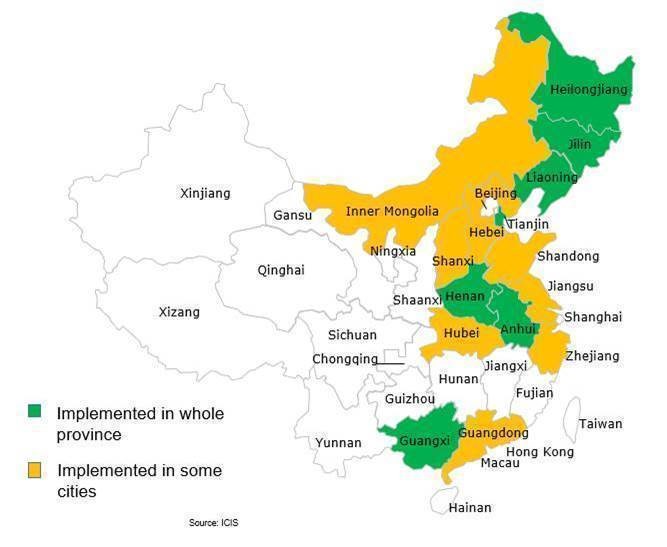 E10 gasoline implementation was rolled out by end-2019 across the provinces of Liaoning, Jilin, Heilongjiang, Henan, Anhui, Guangxi and Tianjin, and in selected cities in the provinces of Shanxi, Hebei, Shandong, Jiangsu, Inner Mongolia, Hubei, Zhejiang and Guangdong.

The National Development and Reform Commission (NDRC) and the National Energy Administration (NEA) had softened their stance on compulsory implementation in December 2019 as domestic fuel ethanol production was low amid a feedstock shortage.

Last year, China has produced less than 3m tonnes/year of fuel ethanol, about a quarter below its installed capacity of more than 4m tonnes/year, according to ICIS estimates.

Corn is a major feedstock for the production of fuel ethanol in China.

Based on China’s apparent gasoline consumption and assuming a nationwide implementation of the E10 mandate, its annual fuel ethanol demand is estimated to be more than 10m tonnes in the next 10 years.

The country’s fuel ethanol production capacity expansion is likely to slow down in tandem with slackening government-led promotion of ethanol gasoline.

A lack of interest from consumers and refiners, and difficulties in supervision also impede implementation of the E10 mandate.

Private car owners have been reluctant to use ethanol gasoline due to its weaker octane power, corrosive properties and lack of cost efficiency.

Ethanol gasoline may not be as enthusiastically promoted as before, but in the domestic markets where the biofuel is already exclusively used, strict supervision measures are in place to ensure compliance.

Gasoline ethanol market supervision was part of the Energy Regulation released by the NEA in 2020 and 2021.

BLOG: China’s ethylene equivalent demand growth in 2022 could be as high as plus 9% or as low as minus 3%