HOUSTON(ICIS)–US wax production slides to historic lows as limited base oil feedstock availability continues going into the remainder of Q2.

According to the latest US Energy Information Administration (EIA) figures, US paraffin wax output dropped to 65,000 bbl in February, the lowest monthly volume recorded by the entity since 2005.

The drop materialised when the mid-February polar storm took significant  base oil feedstock capacities offline and as refiners later dealt with unplanned maintenance.

Paraffinic base oil production fell to new lows in February as well, according to the latest EIA data.

According to ICIS data, roughly 42% of virgin base oil capacity came offline during polar storm Uri.

Already tight supplies were met with base oil turnarounds heard earlier in the year, creating a tighter squeeze on global inventories heading into Q2.

Major base oil and wax producer PetroChina’s Fushun, China, refinery also remains on turnaround through the end of the month.

While US refinery utilisation has surpassed 85% in recent weeks, run rates remain below the typical three-year median of around 90%, which could indicate lower-than-normal base oil operations in the near future. 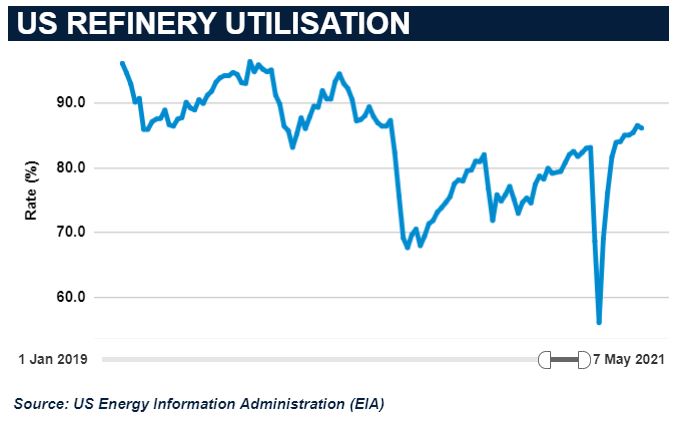 TRADE
A small rise in paraffin wax imports and fall in exports to close out Q1 left the trade picture mostly unchanged.

According to the ICIS Supply and Demand Database, US wax imports in March rose slightly from the prior month with just over 17,000 tonnes, mostly coming from Canada, China, Japan, Malaysia, South Africa and Taiwan. 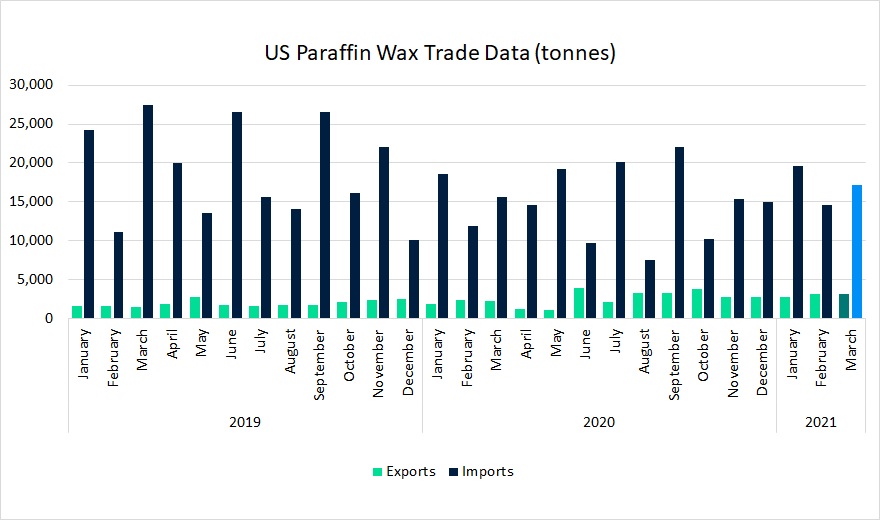 Meanwhile, US wax exports fell slightly over February’s total volume of around 3,000 tonnes, with most cargoes going to Australia, Canada, China and Mexico.

PRICE PRESSURES TO MOUNT FURTHER
An already tight US supply situation is being compounded with increased inflation pressures domestically, which comes ahead of an active summer production season for refineries.

Slackwax market sources have indicated price increases slated for mid-May as extremely limited inventories have forced out any new business for the coming months. Possible price increases for June were heard, but not widely confirmed.

Significant supply-side price pressure thus far will likely be felt with rising demand ahead of the anticipated candle-selling season starting in late Q3 and early Q4.

Paraffin waxes are widely used for candle making and in the packaging industry as wax coatings for paper, film and foil substrates, including corrugated board, cups and container.

US wax producers include ExxonMobil, HollyFrontier and Calumet.

Thumbnail image shows candles, which are made with paraffin wax. Image by Shutterstock