Home News INSIGHT: US economic outlook strengthens but all eyes on inflation

INSIGHT: US economic outlook strengthens but all eyes on inflation

NEW YORK (ICIS)–The US economic outlook continues to strengthen with economists boosting 2021 GDP growth forecasts amid robust consumer spending and manufacturing activity. However, the number one concern is inflation, and whether the upswing in prices is indeed transitory or will become an impediment to long-term economic expansion.

The spectre of persistent inflation is rankling financial markets as elevated pricing data continues to roll in. However, recent sharp price declines in lumber, copper, iron ore and certain chemicals after huge run-ups are tempering concerns to some extent.

The ICIS US and northwest Europe chemical spot indexes are down significantly from their highs earlier in the year, but are still elevated versus pre-pandemic levels in 2019. 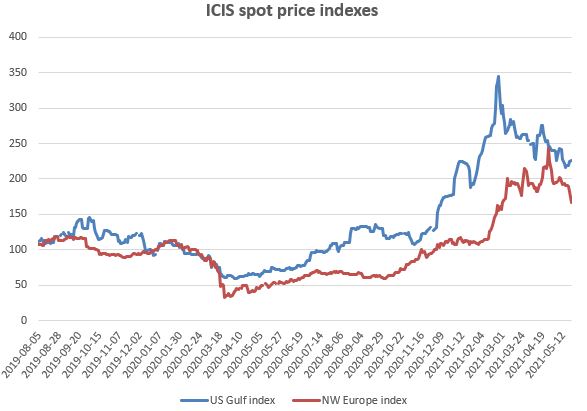 For now, the US Federal Reserve remains steadfast in its view that the current bout of inflation is transitory and thus to keeping interest rates near zero to support the economic recovery and reduce unemployment further from the current 6.1%.

“There is a significant risk of inflation picking up in the US and I don’t think it’s transitory. I’m not talking about 1970s type [of inflation] but it could get to rather uncomfortable levels or levels we haven’t seen in a generation,” said Kevin Swift, chief economist at the American Chemistry Council (ACC) at the ICIS World Surfactants Conference on 25 May.

Surging prices for lumber, copper and polyvinyl chloride (PVC) are giving home builders pause. Housing starts plunged 9.5% in April to 1.57m from March with single-family housing starts down 13.4%. Year-on-year comparisons lose relevance with the US in full lockdown last April, but for the record, starts were up 67.3% on that basis.

The PPI report “actually understates the severity of problems contractors are experiencing” with “even steeper price increases” since the PPI data was collected, while lead times for delivery of goods “have grown ever longer and less certain”, said Ken Simonson, chief economist at the Associated General Contractors of America (AGC) trade group.

Prices for construction materials in April jumped 19.7% year on year, the largest gain in the 35-year history of the price series, he noted.

WAVES OF SUPPLY DESTRUCTION
Rolling waves of supply destruction, from the coronavirus lockdowns followed by an active US hurricane season in 2020, followed by the US winter storm in February 2021, have led to extraordinary chemical price inflation. This extends to other materials as well.

The industrial chemicals component of the US Producer Price Index (PPI) in April was up 3.2% month-on-month and 40.3% year on year. The year-on-year percentage move, coming off last year’s pandemic lockdown in April, was the highest since June 1975.

“In our view, the strength of demand recovery and ongoing economic stimulus measures have a lot to do with it, but so too does the persistent destruction of supply,” said Kevin McCarthy, analyst with Vertical Research.

“This supply dynamic has progressed in waves, much like an earthquake followed by a series of aftershocks,” he added.

One factor to keep in mind on inflation is that 2020 was largely a depressed year because of the pandemic, said the ACC’s Swift. Thus, year-on year comparisons will show stronger gains.

“Many of the worst-affected services are rebounding, gathering momentum, as are their prices. There are a number of supply chain constraints and shortages that really extend to pretty much everything – lumber, resins at one point, semiconductors and containers. That’s all fuelling higher prices,” said Swift. 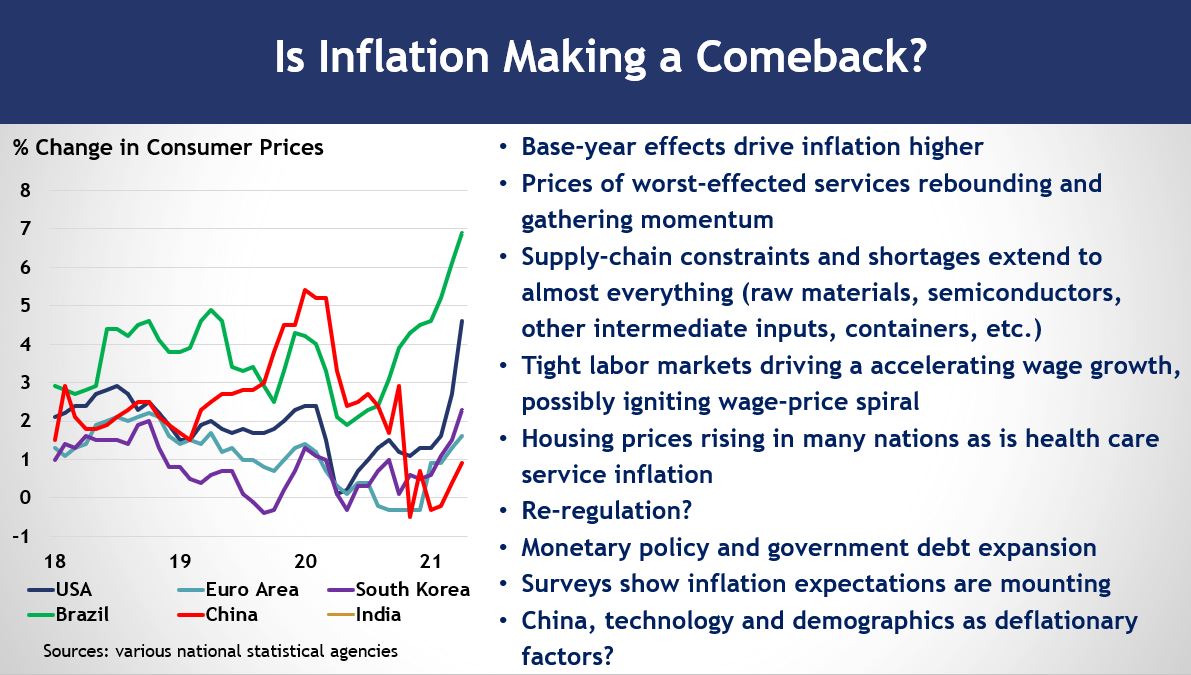 Other factors contributing to inflation include rising housing prices, healthcare costs, potential re-regulation of manufacturing, loose monetary policy and financial asset purchases by the Fed, along with the “explosion of government debt” and tight labour markets, he noted.

Economists overall expect full year CPI to rise 2.8%, with a similar 2.7% gain in the personal consumption expenditures (PCE) price index – well above the Fed’s 2% target but trending down through the year towards 2% for both the PCE and core CPI by the fourth quarter.

EMPLOYMENT AND CONSUMER SPENDING
Enhanced US Federal unemployment benefits of $300/week through early September may be keeping workers on the sidelines, thus tightening the labour market and pressuring wages higher.

However, already 23 states have announced they will end these enhanced benefits earlier in June and July, citing labour shortages. A number of these states are offering back-to-work bonuses instead.

“Even in an era where there’s high unemployment, labour markets are tight and accelerating wage growth. In the US, many employers, particularly small businesses, are competing against the government in terms of payments that are given,” said the ACC’s Swift.

Meanwhile, the US consumer spending spree continues. While US retail sales were up just 0.5% in April versus March, the previous month saw a stimulus-fuelled 10.7% month-on-month surge. Restaurants and bars saw a 3.0% sequential improvement while motor vehicles and parts sales gained 2.9%.

AUTO SALES SURGE
US light vehicle sales are firing on all cylinders despite the semiconductor shortage hampering production, with April sales up 3.1% from March to 18.5m units, the highest since July 2005. Auto dealer inventories fell to a record-low 33 days of supply as of 1 May versus normal levels of around 65 days.

Manufacturing activity continues to be robust, even with the April reading of the ISM Manufacturing PMI easing to 60.7 from 64.7 in March which was the highest level since December 1983. The manufacturing PMI logged its 11th consecutive month of expansion (above 50).

US GDP FORECASTS RISE
Economists this month once again raised their US GDP forecasts for 2021, but the pace of upward revisions is slowing. After Q1 GDP growth of 6.4%, consensus is for full year GDP growth of 6.6% (up 0.3 percentage points from last month). Consensus estimates for 2022 GDP also rose to 4.4% from 4.3% a month ago.

“Going forward, there’s no reason why this expansion cannot last for 7-9 years – that’s historically what has been the case. The exceptions were in the 1950s and 1970s when we had some extenuating circumstances. But if you look at business cycle history since the 1780s, the expansions typically last about 7-9 years,” said the ACC’s Swift.

GLOBAL OUTLOOK
The outlook is also improving on a global basis, despite continuing coronavirus outbreaks in certain regions and resulting lockdowns, noted Swift.

He points to the revival of global trade in spite of shipping container dislocations, as evidenced by the Container Throughput Index composed by the Leibniz Institute for Economic Research (RWI) and the Institute of Shipping Economics and Logistics (ISL). The index includes data from 91 international ports, accounting for around 60% of global container traffic.

This index rose in March by a seasonally adjusted 1.2 points to a record high of 122.6, according to the latest report on 30 April.

“This is mainly being driven by China and southeast Asia,” said Swift.

European economies have been lagging but are now showing improvement with the easing of lockdowns as vaccination rates pick up, he noted.

China was the first country to rebound from the pandemic and the only major economy to record GDP growth in 2020. However, its recovery is expected to level off going forward.

“We still see robust export growth but that will slow, as will business investment because credit conditions are tightening. Moderating construction activity will weigh on industrial output,” said Swift.

It’s a mixed picture in other emerging markets, with severe COVID-19 outbreaks in Brazil and other Latin American countries, along with India. However, Mexico should benefit from strong US economic growth and Russia from higher oil prices, he noted.