NEW YORK (ICIS)–US headline inflation as measured by the Consumer Price Index (CPI) jumped again in May, but it is unlikely to shift the US Federal Reserve’s view that today’s high level of inflation is transitory.

The US CPI in May rose 0.6% from April on a seasonally adjusted basis, and was up a stunning 5.0% from a year ago, coming in hotter than consensus expectations. The core CPI, which excludes food and energy, was up 3.8% year on year, the highest since 1992. 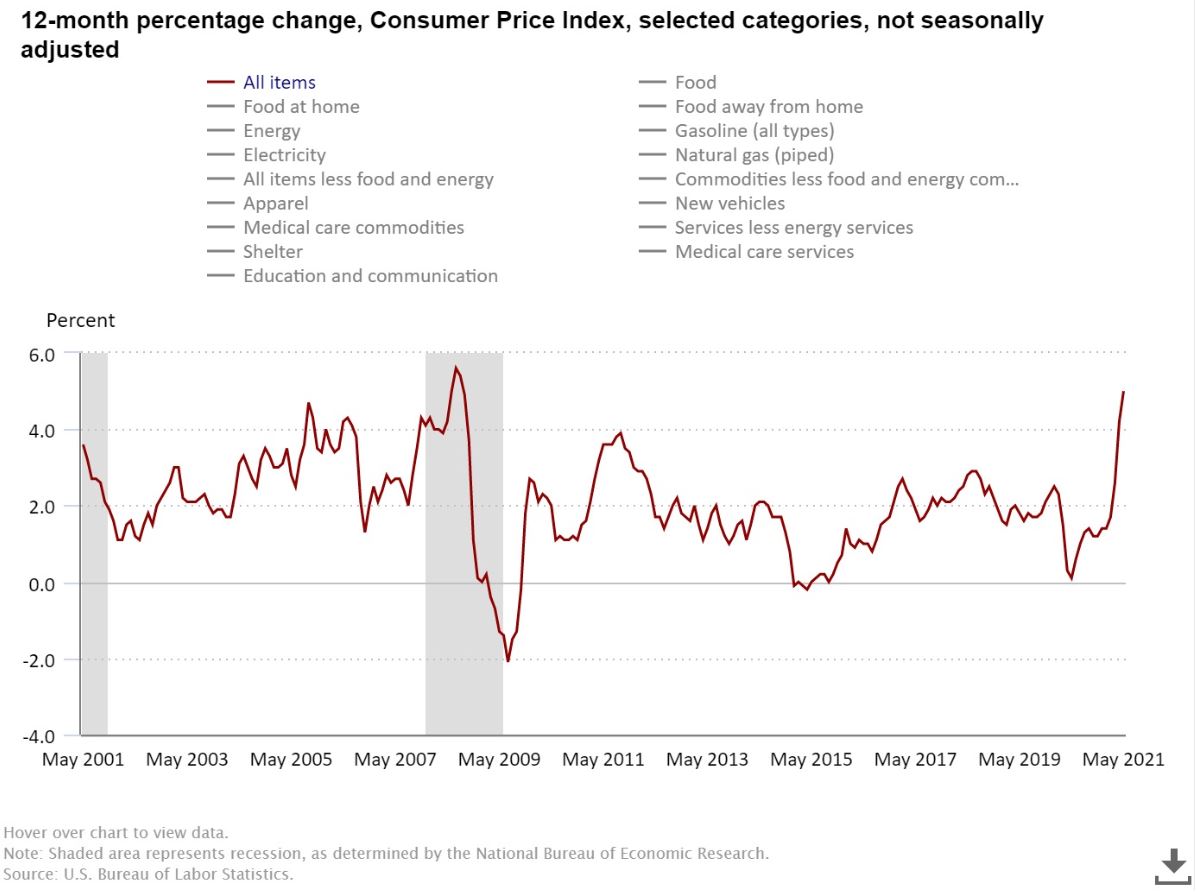 Normally with this type of print, you’d expect yields on US government debt to shoot up. But the response has been the opposite. The 10-year Treasury yield actually fell to about 1.46%, remaining well below the high of 1.77% reached on 30 March when inflation fears ran rampant.

The market appears to be explaining away the strong headline CPI number as a bit of an anomaly. Used cars and trucks prices surged 7.3% in May from April, and were up 29.7% from a year ago. That component alone accounted for about a third of the month-on-month increase.

New cars and trucks prices rose a more modest but still robust 1.6% in May from April, and were up 3.3% from a year ago.

Clearly there’s greater demand for autos than supply, well documented with the global semiconductor shortage constraining production and leading to ultra-low inventories. As of 1 June, US auto dealer inventories dropped to a record low of 23 days of supply versus the normal level of 65 days.

These low inventories are causing a spike in used car demand. Yet this is likely to ease in the second half.

While automaker GM expects certain plants in North America, Asia and South America to continue to be impacted by the semiconductor shortage through June and July, it expects to resume production at other plants and increase deliveries to dealers through the second half as global semiconductor supply recovers.

Certainly we’ve seen inflation on the chemicals side, accelerated by the mid-February US winter storm that shut down production for weeks and months, tightening supply chains worldwide. Combine that with already low inventories coming into 2021 and shipping container dislocations in the midst of a historic reopening of economies, and you have a recipe for higher prices all around.

Clearly some of the spikes in chemicals prices will be transitory as US production continues to ramp up and as inventories recover.

ALL ABOUT THAT BASE
Inflation is here and the debate on whether it’s transient rages on. However, it’s worth noting that year-on-year comparisons are skewed by the coronavirus pandemic. In May 2020, the US was essentially in full lockdown as infections rapidly spread.

Prices were unusually depressed in 2020 from airline fares to apparel to fuel. As an article in the Wall Street Journal on 6 June titled ‘The Fed’s Inflation View is All About That Base’ pointed out, a more meaningful comparison would be to measure inflation today versus pre-pandemic 2019, and to keep in mind this is across a two-year period.

Applying such an analysis to May, US CPI yields a 5.1% gain over two years since May 2019, for a compounded annual growth rate (CAGR) of 2.5% – still above the Fed’s 2% inflation target but not overly concerning.

The Fed has indicated it would allow inflation to run above its 2% target “for some time” after periods when it has run below that level.

It’s no surprise the US is seeing higher inflation, given the $5tr in fiscal stimulus approved along with a near zero interest rate policy by the Fed. An infrastructure stimulus package would add further fuel to the fire.

INCOME INEQUALITY, MINORITY UNEMPLOYMENT
However, the Fed will likely exercise patience in terms of interest rate policy as it seeks to maximise employment coming out of the pandemic and foster a full as well as inclusive economic recovery. The latter point in particular will play into Fed policy.

Stepping beyond its usual focus, the Fed, chaired by Jerome Powell, has been vocal about social issues – income inequality and minority unemployment in particular. The Fed is monitoring black and Hispanic unemployment, along with lower wage workers.

Black/African American unemployment in May 2021 was far worse than the average at 9.1% – down from 16.7% in May 2020 but also much higher than 6.2% in pre-pandemic May 2019. Hispanic/Latino unemployment at 7.3% is also above the overall average, according to the US Bureau of Labor Statistics.

The Fed won’t be compelled to increase interest rates with minority unemployment rates this elevated. Rather, it will be patient, allowing inflation to run hot for a period, especially if it believes the high levels are transient.

EYES ON WAGE INFLATION
In the overall inflation equation, economists closely watch wage gains since they tend to be much stickier than commodity price fly-ups.

Economists may be more concerned about wage inflation than the Fed, which probably would like to see robust gains in wages, especially on the lower end.

“We can affect indirectly income inequality by doing what we can to support job creation at the lower end of the market,” said Fed Chairman Powell on 13 February in testimony before the Senate Banking Committee.

Today the employment picture is skewed by the extra $300/week in enhanced unemployment benefits provided by the Federal government in conjunction with the states. While the programme is scheduled to end in September, half of US states have elected to end it early – in June and July – citing it as a disincentive to work.

Businesses have complained about labour shortages, and have had to pay higher wages and bonuses to attract workers, effectively competing with the US government. However, as these enhanced unemployment benefits roll off, wage pressures could ease.

There’s no doubt inflation is here – in in food, energy, materials, goods, housing and wages – and this could last for some time. However, the high current level of inflation may well be transitory, and the Fed will take its time to see if this scenario bears out.