HOUSTON (ICIS)–Meteorologists expect that possible tropical storm No 3 to strengthen before it makes landfall in Louisiana early Saturday.

The storm continues to drift north in the central Gulf of Mexico and is expected to cause heavy rainfall in Louisiana and the southeast US, including southern Mississippi, southern Alabama and portions of the Florida Panhandle.

Maximum sustained winds have increased to near 45 miles/hour (75km/hour).

The following map shows the updated forecast path of the storm. 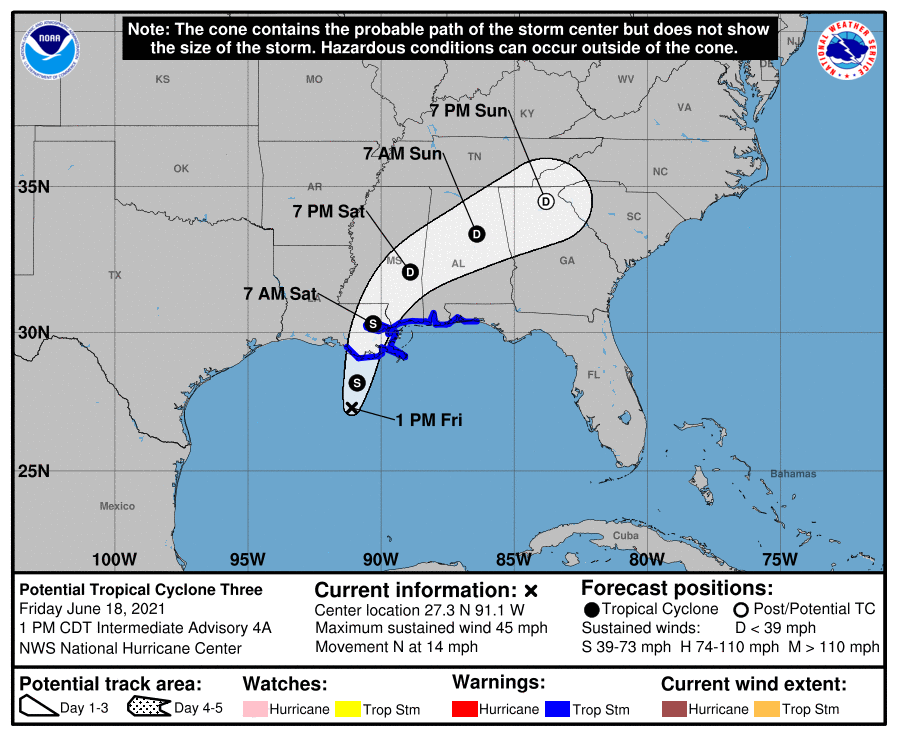 Meteorologist are expecting the system to move along fast enough to prevent major flooding, but the system is forecast to produce flash flooding and gusty winds.

The US National Oceanic and Atmospheric Administration expects rainfall totals of 4-8 inches (10-20 cm) with isolated maximum amounts of 12 inches expected across portions of the central Gulf Coast.

Coastal inundation of 2-3 feet (60-90 cm) will be possible along the open coast with 1-2 feet of inundation across the tidal lakes, said the National Weather Service in New Orleans.

Occidental Petroleum has released a weather advisory stating that the company is tracking the storm as it moves to the Gulf.

“All of our facilities have plans to prepare for weather-related events and are implementing those procedures,” it said. It did not comment on production.

The Bureau of Safety and Environmental Enforcement (BSEE) is expected to issue a report on any new shut-ins later in the day.

Tropical storm warnings have been extended as conditions are expected to begin within 12 to 24 hours, according to the NOAA.

The warnings are in place along the Louisiana coast from Cameron to the mouth of the Pearl River, which includes Lakes Pontchartrain and Maurepas along with the New Orleans metro.

In addition, there is a wind advisory in effect for northern southeast Louisiana parishes. Meteorologist expect the strongest winds will be associated with any rain bands that move through.