Several sources have told ICIS that German chemicals major BASF, which operates the large-scale petrochemicals complex at Ludwigshafen by the River Rhine, is having logistical problems moving material in or out of the complex.

On Monday, sources reported an “unplanned issue” BASF was experiencing in its styrene chain due to the Rhine, but confirmation is pending and the company had not responded to a request for comment at the time of writing.

As the areas first heavily affected by flooding address the major social and economic costs, high water levels on the Rhine have moved towards the even more industrial areas in Germany’s west and along the German-Dutch border. The Rhine empties into the North Sea.

“At the moment, the Rhine is closed for shipping only between Iffezheim (km 334) and Mannheim-Rheinau (km 410,5),” said a WSV spokesperson.

“The stretch between Mannheim-Rheinau and the German-Dutch border is open.”

The waterway is a major transport route for chemicals, petrochemicals, and oil products in northwest Europe.

The inability to move product on this route will increase logistics costs for petrochemicals as product must be moved instead by road or rail, which have lower capacity.

WSV also said that the 50km stretch of the Rhine which closed on Friday had reopened over the weekend.

Late on Friday, a source at a large chemicals logistics company said its operations were still unaffected, but added the company was preparing for the inevitable: several closures as the water flows downstream.

“BASF etcetera [other large chemicals companies based in the area] are affected but loading of barges is for now normal at our premises. Things can change every hour – in a couple hours, other parts of the Rhine could be closed so barges can’t leave heading for Germany,” said the logistics source.

“Railcars [rail tank cars, RTC] seems to be a disaster, as part of it has been washed away. At BASF, it’s impossible to get barges over there as water far above [the maximum levels for barge shipping].”

Another source in methanol, a key building chemicals component, said that, while the water’s flow into the Netherlands is slowing as the heavy rains stopped over the weekend, all operators using the Rhine as a transport route were set to be hit one way or another.

“It will have an impact on destinations on the lower Rhine as well, like Cologne or Ludwigshafen, but I’m not expecting this to be massive,” said the source.

“When the wave is over, navigation should immediately be possible again as of Monday, Tuesday.” 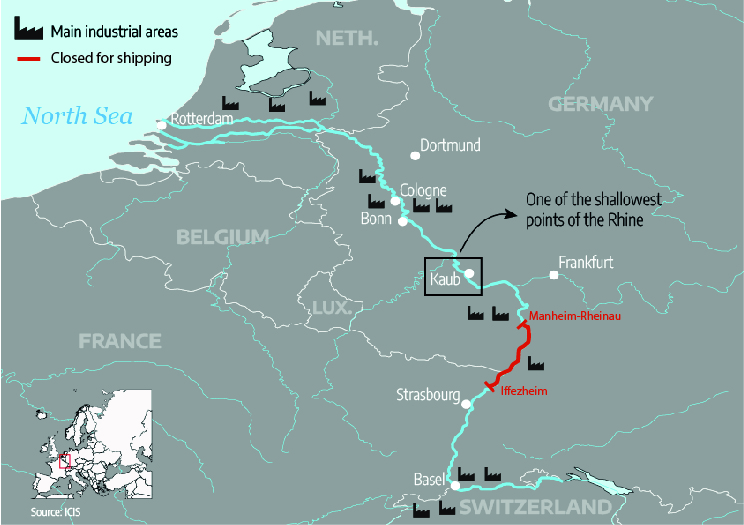 –
HUMAN, SOCIAL, POLITICAL FALL-OUTS
German authorities have said nearly 200 people have died in the floods, but many are unaccounted for, and there are fears the death toll could be much higher.

The authorities in the country also face criticism about having been warned that intense rain was forecast, with potential for heavy flooding, but that many municipalities were caught off guard by the scale of the natural disaster, which caused many small rivers to overflow.

German citizens are starting to come to terms with the scale of the human cost, and even those who benefit from the Rhine closures cannot avoid wondering whether much could have been done to avoid the loss of life.

A truck distributor working mainly in the methanol market said business was looking good for the coming week, adding that its capacity may even be overstretched, but business considerations had to come after the human drama, which has given Germany a very bleak start to the summer.

“The business side is always one perspective. You see, a lot of people have lost their lives in Germany, and apparently 1,000 [are] still missing,” said the distributor.

“Business-wise,  it is optimistic. [But it’s] also not so easy to serve this additional demand,” the source added.

With the effect of climate change starting to impact regions all over the globe, the topic remains as urgent in Germany as it always has been, with the German Green Party the largest in Europe.

According to polls, it is becoming the predominant progressive force in the country, overtaking the social democrats of the SPD.

In a key federal general election in September, which will be the end of an era as Angela Merkel departs as head of government, the Greens stand a chance of becoming the first political party, and potentially appointing the next German chancellor.

With public opinion increasingly placing climate change as a main concern, the dramatic scenes witnessed by the country in the past week are likely to prop up support for the Green Party, who have always campaigned for tougher action on climate change.