HOUSTON (ICIS)–The rise in prices for natural gas has caused ethane prices to increase, one of the factors that have tightened margins for US ethylene producers.

That’s not to say that US ethylene margins are low. ICIS has assessed ethylene contract margins at a three-and-a-half-year high. Still, that is down from an even larger multi-year high earlier in 2021. Margins could tighten further as US ethylene supplies continue to grow.

Ethane is important for US petrochemical producers because it is the predominant feedstock for producing ethylene.

NATGAS SETS FLOOR FOR ETHANE PRICES
Even though the US gets a lot of its ethane from oil production, the price of the material is still linked to that for natural gas.

Before petrochemical plants can acquire ethane, midstream companies need to extract it from the raw gas that comes out of oil and gas wells.

If ethane prices are too low to justify extraction, then midstream companies can leave some of the ethane in the gas stream, and it is later burned as fuel.

Since March of this year, the prices of natural gas and ethane have moved in lockstep as shown in the following charts.

The first chart shows the ICIS spot assessment for Mont Belvieu ethane prices. Prices are listed in cents per gallon on a free-on-board basis. 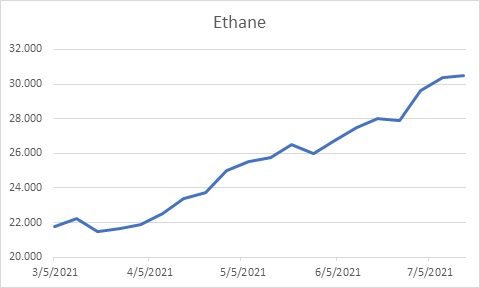 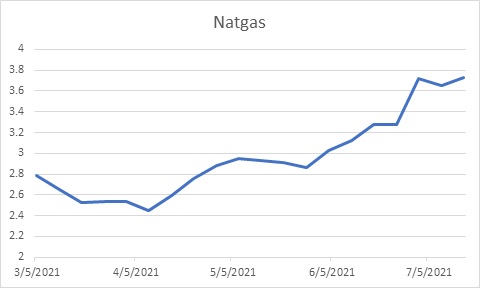 The run-up in natural gas explains much of the increase in ethane prices, said Barin Wise, vice president – feedstocks and fuels, for Chemical Data (CDI), part of ICIS.

On Friday, August Henry Hub natural gas futures closed above $4/MMBtu. The last time the front month August contract was this high was in 2014, according to the Energy Information Administration (EIA).

Henry Hub futures reached such highs because of increased gas-fired power generation, a rise in exports and lower storage levels.

In addition, US oil production has yet to return to pre-pandemic levels, according to the EIA. A significant amount of natural gas is produced from the associated gas that comes out of oil wells.

OTHER FACTORS PRESSURING ETHANE
Although natural gas prices have played a significant role in the run-up in ethane, it is not the only contributor.

Wise said another factor is increased demand from export and from crackers.

The Baystar joint venture is starting up a new ethane cracker in Port Arthur, Texas, which will add 1m tonnes/year of ethylene capacity.

A joint venture made up of ExxonMobil and SABIC is in the midst of completing an integrated polyethylene (PE) complex in Corpus Christi, Texas, that will include a 1.8m tonne/year ethane cracker.

Earlier in 2021, the first very large ethane carrier (VLEC) was loaded at the new Orbit terminal in Nederland, Texas, and was headed to Jiangsu province in China.

As a result of exports and new crackers, CDI expects ethane demand to rise by 365,000 bbl/day from the second quarter of 2021 to the third quarter of 2022, Wise said.

The US should have enough supply to meet this increased demand, based on the amount of ethane being rejected and the increase in energy production from the Permian basin in west Texas, Wise said.

He noted that a lot of the ethane that is being rejected is in the upper Midwest, the Northeast and the Rockies, far from the petrochemical plants on the Gulf Coast. Transporting ethane from such distant sources would require a premium, and that’s assuming that the pipeline capacity exists to ship the material to the Gulf Coast.

ETHYLENE MARGINS
Ethane costs are one of the components in ethylene contract margins, and its rise has played a part in eroding margins.

But the bigger driver has been the volatility in spot ethylene prices, said Kim Haberkost, director of olefins at CDI. She attributed the volatility to supply disruptions, low inventories and tight supply-and-demand balances.

CDI expects ethylene contract margins to be compressed for the rest of the year, but that’s mainly due to ethylene spot prices, which should fall because of increased supply, she said.