SINGAPORE (ICIS)–Six Japanese companies, including petrochemical producer Idemitsu Kosan, will start working on a power-to-chemicals (P2C) demonstration project in September, in response to the government’s call to promote creation of a circular carbon society model.

Financial details of the project were not disclosed.

“The P2C plant being studied this time will use artificial photosynthesis technology to reduce the CO2 separated and collected from exhaust resources into CO, which will then be reacted in the FT [Fischer-Tropsch] synthesis process with hydrogen obtained from renewable energy using the existing petroleum refining process in a plant to produce liquid fuels, such as jet fuel, light oil, etc,” the companies said in a joint statement on Tuesday.

“P2C can efficiently use renewable electric power and hydrogen from renewable energy without extracting new fossil resources and this is expected to significantly reduce the amount of CO2 emissions and greatly contribute to achieving carbon neutral,” they said.

Under the plan, Toshiba Energy Systems and Solutions will build a prototype of a full-scale carbon dioxide (CO2) electrolysis unit and conduct demonstration operation of the unit its Hamakawasaki Operations in Kawasaki in Kanagawa Prefecture.

“Through this demonstration project the six companies will contribute to the commercialization of a SAF [sustainable aviation fuel] supply chain based on carbon recycling as well as regional revitalization,” they said.

“This initiative was adopted as a commission project by the Ministry of the Environment and the six companies will study promoting both decarbonization and regional development by utilizing the infrastructure and characteristics of regional areas to achieve carbon recycling within those regions,” the companies said. 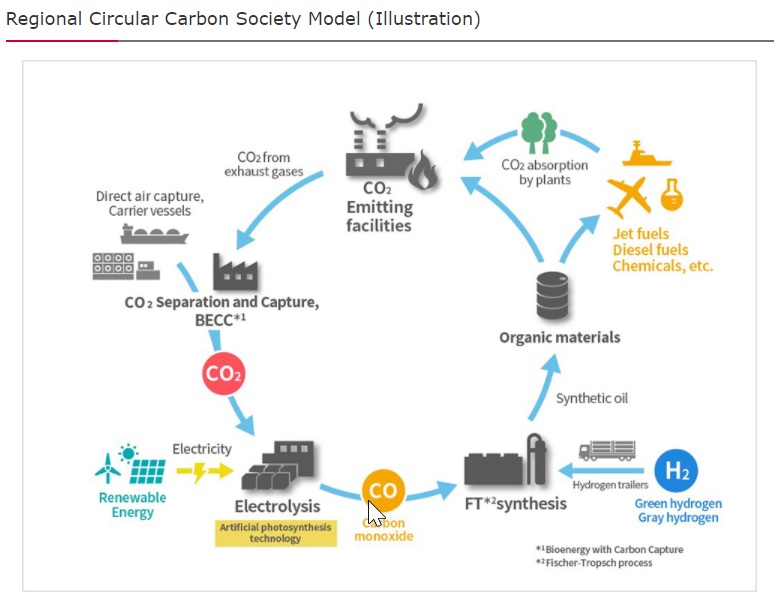