Companies in the southwest of Germany, however, are still reeling from the July floods that caused widespread disruption to rail and road transport.

Nationally, 42.2% of construction companies reported materials shortages, down from 48.8% in July.

In public works – or civil engineering – the materials shortages have been less pronounced throughout, and also eased in August, with 31.4% of providers reporting shortages, down from 33.9% in July.

“We’re seeing some relief in lumber, but many wood products are still hard to come by. The bottleneck is driving prices upward, especially in building construction. Many companies there are reporting price increases, and almost half the companies in the sector are also planning further increases soon,” said Ifo’s researcher Felix Leiss.

“The shortage of skilled workers is an additional concern for the construction industry. Currently, one in three companies is complaining of difficulties in finding suitable staff.”

FLOODS DISRUPTION CONTINUES
Germany’s 2021 floods were historic in all senses, and the human and economic costs is still being counted; heavy rainfall in July caused several rivers to overflow, wiping out entire neighbourhoods of small villages around the southwest of Germany.

Petrochemicals logistics were widely disrupted, like practically all manufacturing sectors in Germany; the German lander of North Rhine-Westphalia was the state most affected, and logistics in that state are still reeling as reconstruction works on rails and roads continues.

“The July floods in Germany triggered new local upheavals. We received reports in August, particularly from North Rhine-Westphalia, that the events had exacerbated the shortage of materials,” said Leiss.

“The proportion of affected companies there is now noticeably higher than the German average.”

Rising prices for construction materials in Germany are also taking place across the rest of Europe; prices for polyvinyl chloride (PVC), a key petrochemical widely used to manufacture pipes and profiles, have nearly doubled in the past 12 months.

PVC is also used in the automobile industry – suffering from its own supply chain woes – and in the production of medical devices.

ICIS’ PVC monthly contract prices for July in northwest Europe (NWE), the Mediterranean and the UK increased due to widespread tightness. 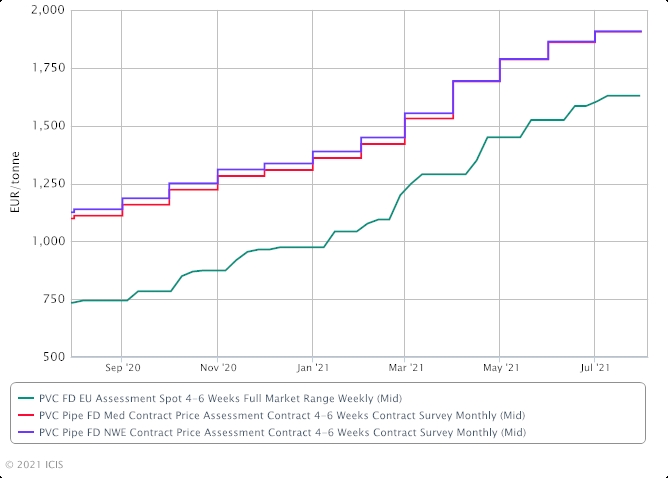 Visit the ICIS Top Page on the construction industry