Home News INSIGHT: Europe BDO market to be defined by self-sufficiency, tightness in 2022

INSIGHT: Europe BDO market to be defined by self-sufficiency, tightness in 2022

Previously regular imports from Asia have been sharply reduced by multiple factors including soaring logistics costs, limited vessel space and price increases in Asia that have made the European market unattractive, despite the record price increases seen for European contract pricing during 2021.

There was also a smaller flow of material from the US, but this has been effectively ended by the closure of Shandong Ruyi’s Texas production facility at the end of 2020.

Imports are likely to remain limited for the rest of the year and into 2022 due to logistics constraints, global tight supply and rising consumption in Asia for polybutylene adipate terephthalate (PBAT).

BDO is a chemical intermediate used in the production of polymers such as polybutylene terephthalate (PBT) and spandex, solvents and fine chemicals.

The succesive quarterly price increases were largely driven by the absence of import volumes, which tightened the market and left buyers with very limited alternatives to domestic suppliers of material.

Domestic production issues at INEOS and BASF – as well as an outage at LyondellBasell earlier this year – have worsened the pressure put on the European market by the absence of import volumes.

Suppliers in Asia largely focus on regional outlets where demand has been decent in recent months.

“We continue to receive enquiries from Europe, but did not ship any over due to limited vessel space,” said a producer in NE Asia.

Hesistancy to commit to import volumes was also heard in Europe.

A European buyer said that “if I buy Asian material… always have risk vessel will be delayed.”

“If desperate (I am) willing to take that risk. At the moment not the case.” 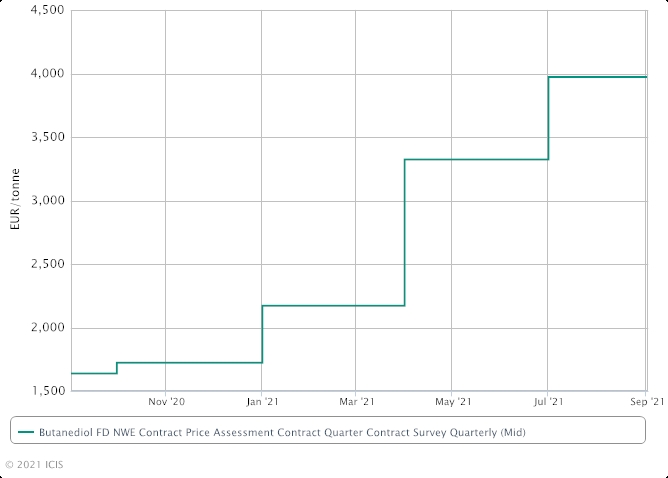 The key automotive sector remains a strong source of consumption despite production limitations caused by a lack of semiconductors, with sources saying that demand will be even stronger once the shortage is resolved.

Demand is expected to stay strong for the rest of the year and into 2022, with sell-side sources anticipating consumption in 2022 to be similar to or stronger than the high levels seen this year.

One producer said that negotiations for next year started much earlier than usual as “a lot of customers (are anticipating a) strong 2022 and want to secure volume”.

PBAT – A FAST GROWING NEW APPLICATION
On top of supply constraints and demand from previous applications, European sources expect the growth in demand for polybutylene adipate terephthalate (PBAT) to put further pressure on BDO availability in 2022.

PBAT is a biodegradable plastic used to replace polyethylene (PE) in single use applications such as plastic bags.

It is a niche product in Europe, but in China 1.8m tonnes/year of new capacity is expected to open during 2021 and 2022 with more than 3m tonnes of additional capacity to follow.

Some of these projects include additional BDO capacity which will counterbalance the additional consumption, but only 321,000 tonnes/year of additional BDO production is expected to open in Asia before the end of 2022, according to ICIS data.

This wave of new capacity is driven by Chinese legislation mandating the use of biodegradable plastic for single use applications.

This ban began on a small scale focused on major cities in 2020 and will become more widespread in coming years with the goal of covering all urban areas by 2025.

The global BDO market is already tight, so this new application has the potential to cut off Asian exports to Europe and even encourage European exports as more and more BDO goes into PBAT.