LONDON (ICIS)–German economic sentiment improved in November compared with the previous month, according to the latest data from the Ifo Institute on Thursday, which could allay immediate fears of a national recession.

The Ifo Business Climate Index rose to 86.3 points, up from 84.5 points in October, as expectations for the coming months improved, despite a downturn in the assessment of the current situations. 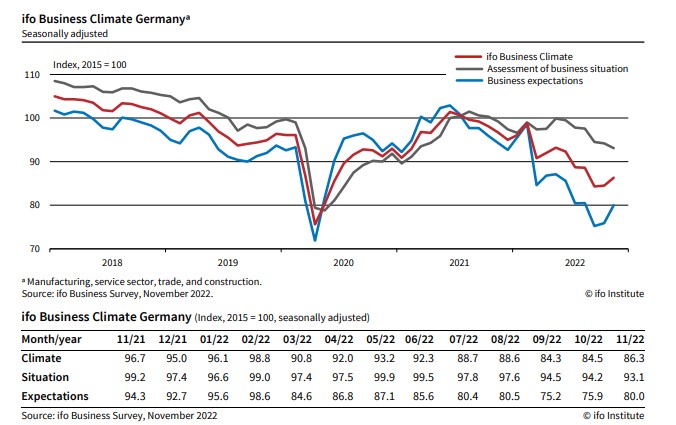 The data could provide a “glimmer of hope”, according to Dutch banking and financial services firm ING, as it may indicate that Germany will avoid a recession with the help of government stimulus packages.

“The downsides still outweigh the upsides: new orders have dropped since February and inventories have started to increase again, a combination that never bodes well for future industrial production,” said ING Head of Macro Carsten Brzeski.

“The government’s fiscal stimulus, currently amounting to some 2% of GDP, will come too late to prevent the economy from contracting in the fourth quarter. However, it is substantial enough to cushion the contraction and to turn a severe winter recession into a shallow one.”

New orders fell in manufacturing once again but despite this the segment tracked a distinct gain on improved expectations for business offsetting the decline in current activity.

In the wake of the Russian invasion of Ukraine, European countries have been filling storage facilities with gas to reduce reliance on the pipeline from Russia.

Warmer temperatures have kept demand muted, but if the weather snaps, this could increase consumption and leave energy intensive producers like the chemical sector in a more precarious position for procuring raw materials.

As the chemical industry is upstream from much of the manufacturing sector, downstream producers may feel the impact of a change to fundamentals at a delay. 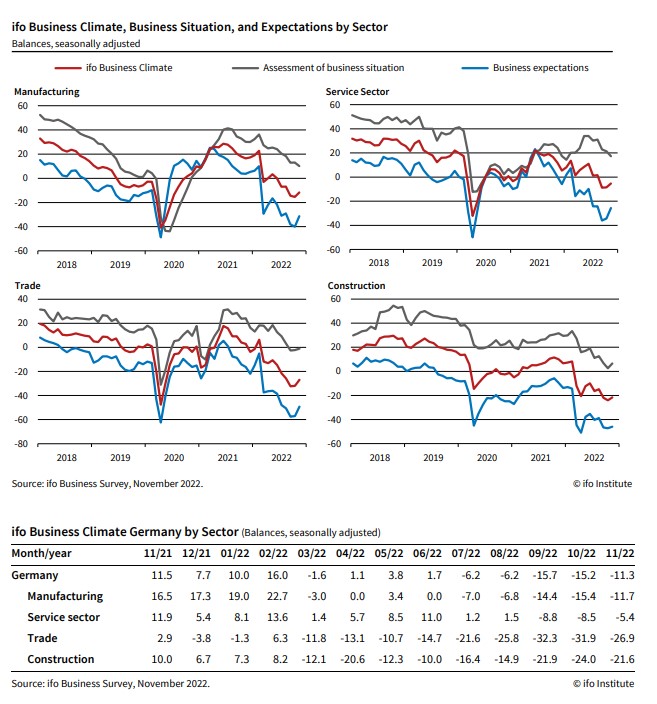 The construction industry noted a rise in sentiment, driven by an improved view of the current situation, and expectations remained gloomy although they recovered slightly. New orders dropped once more.

Trade also tracked an increase across both current activity and outlook for the coming months. In particular, expectations were higher, although around half of companies surveyed were pessimistic about the coming six months.

The services sector tracked a significant improvement, as service providers were less pessimistic about activity in the coming months, but were unhappier with their current business climate.

PODCAST: Mild recession likely in US as economic headwinds show signs of shifting