HOUSTON (ICIS)–A request by a trade group to restrict US shipments of liquefied natural gas (LNG) revived disputes from nearly a decade ago, when industrial customers warned that unchecked exports could cause demand shocks and violent price swings.

Earlier on Friday, the Industrial Energy Consumers of America (IECA) urged the US Department of Energy to restrict exports of LNG.

The request puts the chemical industry in a difficult spot.

It has long been advocates of open trade. The most recent demonstration of this commitment was a call for the World Trade Organization (WTO) to address tariffs, subsidies and other barriers to trade by the International Council of Chemical Associations (ICCA), a group that represents the chemical trade groups of the world.

On the other hand, the chemical industry uses natural gas as a fuel and as a feedstock to produce hydrogen, the key raw material used to make methanol and ammonia.

In refineries, hydrogen is used by hydrocrackers to produce diesel and gasoline. Hydrotreaters use the gas to remove sulphur from fuel.

Natural gas also sets a price floor for ethane, the predominant feedstock used by US chemical companies to make ethylene.

Such concerns were raised in 2013 by Andrew Liveris, then the CEO of Dow. Liveris told the Senate Energy and Natural Resources Committee that “unchecked LNG export licensing can cause demand shocks, and the resulting price volatility can have substantial adverse impacts on US manufacturing and competitiveness”.

At the time, the advent of shale gas was still in its early years. Liveris warned that misguided policy could threaten the cost advantage that the US enjoyed from shale gas.

The American Chemistry Council (ACC) and the American Fuel & Petrochemical Manufacturers (AFPM) had no comments about the IECA’s request.

The American Petroleum Institute (API), which represents oil and gas producers, said, “As world economies recover and demand rebounds, the US is well positioned to provide our trading partners with the resources they need while continuing to supply American households and businesses with affordable, reliable natural gas.”

LNG RESTRICTIONS UNLIKELY
A request from one trade group will unlikely make an immediate change to the Natural Gas Act (NGA), which is the framework for allowing US LNG export licenses.

The licenses are granted under a long-term basis to allow the LNG export plants to operate. Market pricing has not been a restriction for the production of LNG in the US, reflecting the government’s free-market principles. US LNG producers, in their various export license applications, have cited ample production figures underpinning supply for their export volumes.

The US has about 70m tonnes/year of LNG nameplate export capacity, with US producer Cheniere’s 4.5m tonnes/year Train 6 at Sabine Pass in Cameron Parish, Louisiana, next to start online. In addition, there is the early commissioning of Venture Global’s 10m tonnes/year Calcasieu Pass in Lake Charles, Louisiana.

Average feedgas of about 10 billion cubic feet/day (bcf/day) among the existing six LNG plants makes up about 10% of the US marketed gas production, according to the 2021 estimate from the US Energy Information Administration (EIA).

Charlie Reidl, executive director for the Center for LNG, said that the claims by IECA have overstated.

About 80% of the US natural gas market contracted for 2021 is hedged at $3.00/MMBtu or less. As such, industrial consumers are likely far less exposed to spot Henry Hub prices, he said.

While US LNG exports makes up 10% of total gas supply, it is not the sole source of higher demand.

Reidl also cited weather-driven demand and the rebound from the 2020 coronavirus downturn.

Capital discipline exercised by US upstream producers following the downturn has led to the supply tightness as well, Reidl said. Upstream production should respond to price signals and not just remain static.

“What we are finally seeing from the natural gas industry is some restraint that has been missing for the last 10 years,” Reidl said. “Producers are finally behaving and following the actual ability of what production is, and what that means is producers can operate in an environment that can sustain operations and develop shale and produce gas in a way that’s fiscally responsible for their shareholders.”

If the US did proceed with restrictions to LNG exports, it could introduce a host of problems.

If high prices can justify export restrictions, then policy makers could adopt similar limits to shipments of other products and materials, including plastics and chemicals.

Similarly, other countries could adopt similar policies to restrict exports to the US.

The result could be the deterioration in global trade that the ICCA warned about when it presented its proposals to the WTO in its consensus paper.

Ultimately, high prices should encourage companies to produce more natural gas and for policy makers to adopt regulations or reform existing ones that impede gas production.

NATGAS PRICES FALL
Natural gas futures prices have fallen in the last few days, but they remain at multi-year highs. 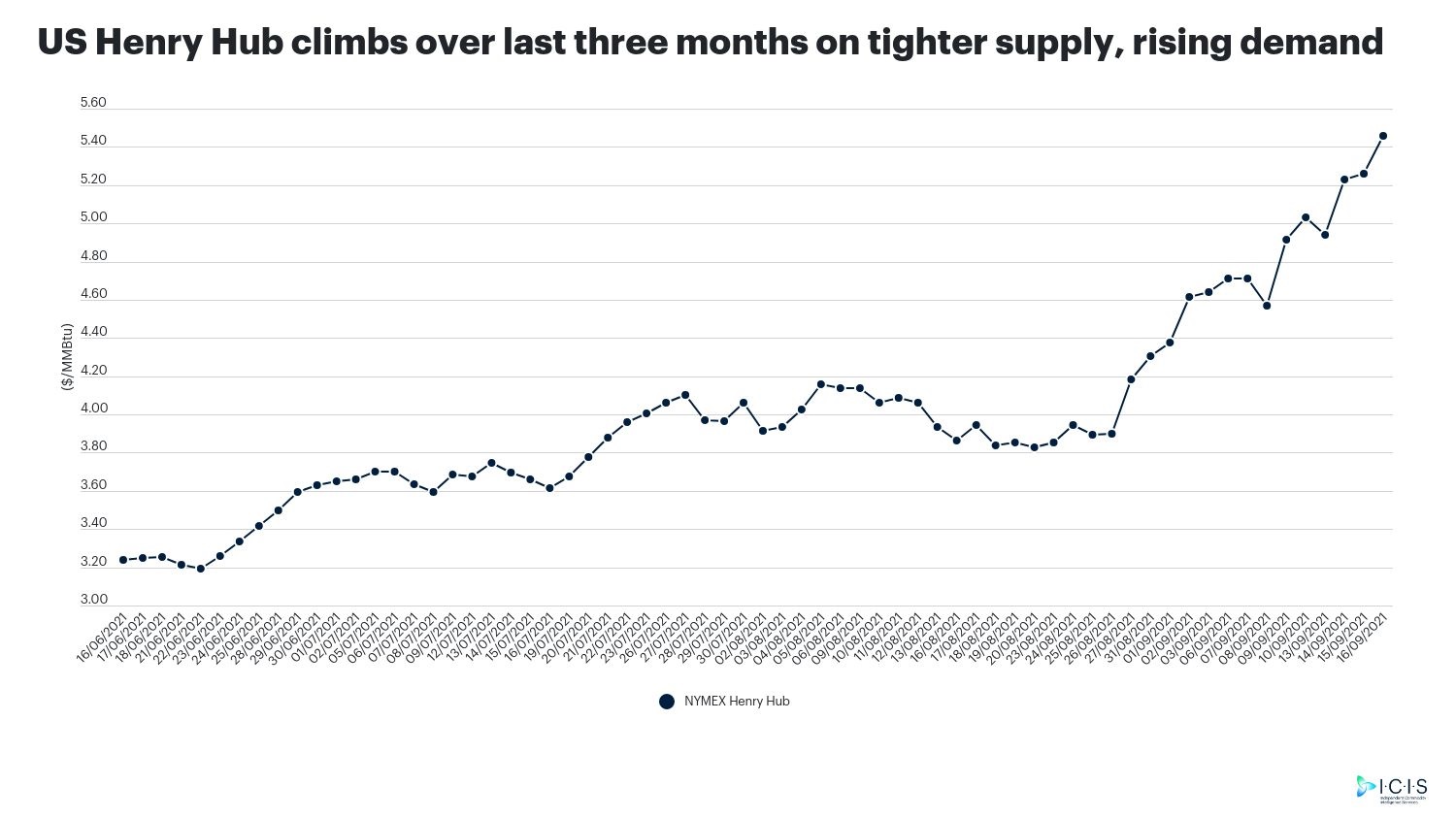 Prices for natural gas influence those for ethane because the US gas stream can tolerate a certain among of ethane.

Because of this tolerance, companies can sell ethane as a fuel instead of a petrochemical feedstock if the price is high enough.

The strength in US prices for polyethylene (PE) have so far insulated the sector from the rise in upstream ethane prices. However, PE prices flatten and ethane prices continue to rise, then margins could take a hit.