BASF to scale up decarbonisation

Germany-based BASF aims to scale up two key decarbonisation technologies in the second half of the decade, its CEO said.

“There are innovative technologies in the pilot phase now – one of them is the electric cracker and the other is methane pyrolysis – two key technologies to actually manage this transformation,” said Martin Brudermuller, CEO of BASF, at a fireside chat during the ICIS Power Players Awards virtual event.

“We are now building pilot facilities – the first entry of these technologies, to learn about them. And then we have to go very quickly into scale-up. And the scale-up will then be in the second half of this decade, so that we will have the first real contribution [by] 2030,” he added.

In March, BASF joined forces with SABIC and Linde to develop the world’s first electrically heated steam cracker furnace which would use electricity to heat furnaces rather than natural gas.

If the electricity comes from renewables such as wind and solar, the new technology could slash CO2 emissions by as much as 90%, according to the companies.

Along with the technological challenges from pilot phase through scale-up, cheap and abundant renewable power is needed to make this work – a wider infrastructure and policy challenge.

“It is not easy. It is not only the technology itself – it’s also about the framework of conditions. And as we all know, it is electricity prices that will determine that this is not only a nice technology exercise but also… economic. So it’s a huge challenge, but also… a very interesting test to facilitate this transformation,” said Brudermuller.

BASF is also working with Siemens to increase energy efficiency through the use of electrical heat pumps to produce CO2-free steam from waste heat. 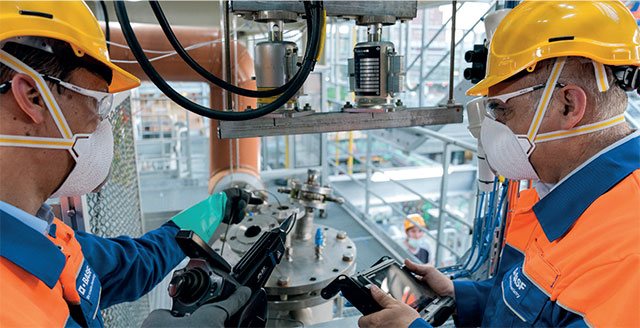 Along with electrifying crackers, the company is working on producing CO2-free hydrogen via methane pyrolysis, where it has developed a new process technology. In this process, methane is heated in a reactor to produce hydrogen, with solid carbon granulates as a byproduct. If the heating is done with renewable electricity, it would be a CO2-free process.

The hydrogen from methane pyrolysis could be a key building block for CO2-reduced production of ammonia and methanol, according to the company.

A number of countries, in addition to the EU, have announced plans to become carbon neutral by 2050. However, now must come the heavy lifting which will entail policy changes to enable this transition, the CEO said.

“We are living in a world that is putting out ever-[greater] ambitions. It’s a race of ambitions. It’s so easy to put out a new target. But the ‘how’ is the most important thing, and that is probably lacking currently in this discussion – very much also in Europe with the Green Deal. And that is really where the challenges are,” said Brudermuller.

The EU’s European Green Deal was unveiled in mid-July with a set of proposals to cut net greenhouse gas emissions by at least 55% by 2030 versus 1990 levels, on the way to becoming “climate neutral” by 2050.

“I’m not worried about our own capabilities – we have the technologies, we have the courage, we have also the financial background to do this,” said Brudermuller.

However, making decarbonisation a success will require two key elements – customer buy-in, as products will be more expensive than they are today, and the policy framework by governments, he pointed out.

“It is very much [about] the framework conditions we get from politics to operate in. So that is… the regulations part on one side, and the price scheme for getting access to cheap renewable energy [on the other],” said Brudermuller.

In Germany, one particular issue is the country’s renewable energy tax (EEG surcharge), he noted. Today this EEG surcharge is 6.5 euro cents/kilowatt hour (kWh) with some partial exemptions for energy intensive industries. The tax is meant to finance the expansion of renewable energy.

In May, BASF and utility RWE unveiled a plan to build a two gigawatt (GW) offshore wind farm off the northwest coast of Germany to provide BASF’s Ludwigshafen site with green electricity for CO2-free production processes such as electric cracking from 2030. This would reduce CO2 emissions at Ludwigshafen by 2.8m tonnes/year, according to BASF.

However, the project would not be feasible without support from policymakers, said Brudermuller.

“In Germany there are particular levies and taxes that really make the landscape not very attractive currently. We have competitive production of renewable energy but if it arrives at the company, it becomes very expensive,” said Brudermuller.

“We have addressed this, and I have a very big hope that the new German government that is coming after the elections in late September will really tackle the issues,” he added.

The key feedstock for the transformation is renewable energy capacity. Far more is needed to enable meaningful decarbonisation, the CEO pointed out.

BASF’s largest site in Ludwigshafen would require at least three times more electricity by 2035 – around 20 terrawatt hours (TWh), which equates to about 15% of the total wind power generated in Germany today, said Brudermuller at the unveiling of the plan with RWE in May.

“Without the availability of sufficient volumes of electricity from renewable sources at competitive prices, this transformation will not be possible – not for us and not for society as a whole in Germany and Europe. Without a rapid and systematic expansion of renewable energy capacity, great political dreams will be shattered,” he said.

“We need much more capacity of renewable energy which is also partly roadblocked by regulations. So this is the big job where I have to say we need a new way of cooperation between politics and industry,” said Brudermuller at the ICIS event.

Overall, the CEO is optimistic the chemicals industry will be able to meet the challenge of decarbonisaton, or as BASF calls it, carbon management.

“I am proud that the BASF team is committed to reduce our carbon emissions quite fast and drastically. We can master these challenges as companies but also as the chemical industry as a whole,” said Brudermuller.

“And as leaders, we have the responsibility to make bold decisions and set the right path to a more sustainable future for all of us,” he added.

BASF’s Verbund, or strategy of integration from upstream to downstream, also involving energy and infrastructure, gives it an advantage in decarbonisation, according to the CEO.

“I think having climate change in front of us and [the challenge of decarbonisation], it is also good to look into yourself and say, Where is your DNA? Where are your strengths? And the Verbund, the integrated production of BASF, is the trademark of BASF and where our strength is,” said Brudermuller.

“And when it comes to decarbonisation, this Verbund also has the unique opportunity to achieve progress very quickly and maybe [provide] a competitive advantage,” he added. ■

BLOG: Global chemicals: What I believe our industry must do in response to a deep and complex crisis