The NCG and GASPOOL market areas are the third and fourth most liquid hubs in Europe after the Dutch TTF and British NBP hubs, though the gap remains large.

The consolidation of the two hubs should help grow liquidity in Europe’s largest physical gas market, to make up the gap with the TTF and NBP.

This topic page brings together updates on developments regarding the hub merger and its impact on the gas market. 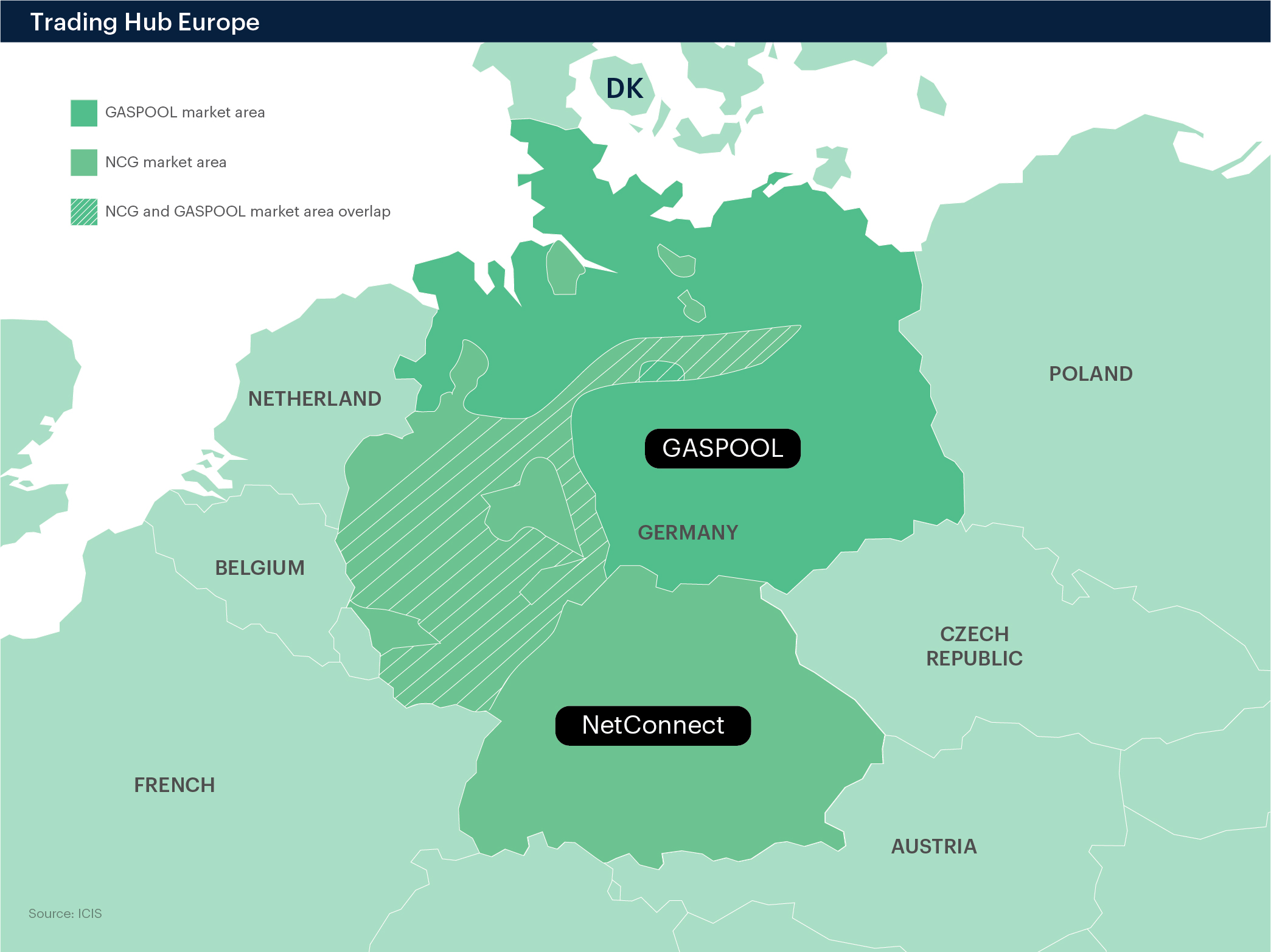 Congestion concerns ahead of German THE gas hub merger

Short term liquidity on the German natural gas Trading Hub Europe (THE), which will form on 1 October following the merger of the NCG and GASPOOL markets, is likely to hinge on the effectiveness of grid congestion management tools.

Following years of planning, Germany’s two gas hubs are set to merge into Trading Hub Europe (THE) on 1 October, with many hoping this will help German liquidity climb towards the Dutch TTF.

The merger will create Europe’s single largest physical gas hub, with the presence of L-gas and H-gas networks in Germany meaning it is technically a merger of four gas hubs.

Nord Stream 2, German hub merger could leave Ukraine, CEE out in the cold

Ukraine and the neighbouring central and eastern European countries are bracing themselves for the triple whammy of peak winter demand, the possible impact of rerouted Russian flows to Nord Stream 2 and the German hub merger, which could leave them out in the cold during the upcoming months.

An ICIS analysis has found the region could face a supply shortfall of anything between 15 to 65 billion cubic metres unless additional volumes are found and more transmission capacity is made available.

The most affected country would be Ukraine, which has been relying on 10-15bcm/year of imported gas from central-eastern Europe since it decided to stop direct Russian imports in 2015.

Virtual Interconnection Points (VIPs) between the Belgian ZTP and H-gas Dutch TTF hubs, and planned unified German Trading Hub Europe (THE) will not be ready on 1 October 2021 when the NCG and GASPOOL merge.

It is expected that the L-gas TTF-THE and Danish-Germany VIPs will be operational for the first day of the newly merged market, with the first market auctions expected to take place on 30 September 2021 for the Day-ahead contract.

German market areas, NCG and GASPOOL announced they have signed a package of contracts providing for the merger of the two market areas into Trading Hub Europe (THE).

The contracts mean that NCG and GASPOOL will merge into a single entity, THE, on 1 June 2021, with THE assuming responsibility for operating and managing the two market areas until they officially merge on 1 October 2021.

German natural gas trade for delivery beyond the October ‘21 merger date is shifting towards the NCG, with traders choosing to manage positions on the more-liquid market.

Over-the-counter (OTC) liquidity on the GASPOOL hub fell by 18% compared to the last three months of 2020 to 197TWh in the first quarter, with the NCG recording an drop of just under 8% to 410TWh.

In the first quarter the NCG maintained its position as the third-most liquid European gas hub, with GASPOOL falling to sixth after being overtaken by the Italian PSV and Austrian VTP markets.

The German Federal Network Agency (BNetzA) on 19 March announced the completion of the Gas Network Development Plan 2020-2030 (NEP Gas), focusing on planned LNG plants and the integration of hydrogen and green gases into the network.

BNetzA decided that no network expansion is necessary to facilitate the German hub merger due on 1 October, arguing that transport capacity to flow gas between the two market areas can be secured using market-based instruments.

Costs of the use of market-based instruments are forecast to be €1.1m-27.6m for the gas year 2025/2026, significantly lower than the cost of physical network expansion, according to the agency.

• Germany‘s import dependency is high with more than 95% of its natural gas demand imported from a diversified supply base.

• The share of Russian gas in German imports oscillates around 50%, with growing tendency in recent years. 2020 saw the intake of Russian gas to touch minimum contractual volumes of around 45 bcm/year but making up a high share of Covid-19 hit demand. The high degree of exposure to Russia is similar to oil markets where German imports are about 36% Russian.

• German gas imports could theoretically be covered all by long-term supply contracts. Assuming that take-or-pay minimum offtake volumes are lower, we believe between 80% and 90% of German gas imports are effectively sourced via supply contracts. More than 20 bcm of gas supply contract quantities, mainly Dutch and Norwegian, expire in the coming years and might be replaced by more flexible arrangements. Maturities of German import contracts have shortened to an average of 20 years, down from more than 25 years in 2010 (including extensions) and volumes flexibilities are said to increase. We estimate that nearly all German import contracts have elements of hub-indexation already but some contracts use neighbouring gas hubs. Contract holders may contemplate a switch to the new THE hub.

• Sourcing via pipeline supply remains the likely option to fill the emerging gap as none of the three planned German LNG import terminals received FID so far (Furthest is HEH Stade with binding phase open season planned in Q2 2021).

CONCLUSION: There is scope for new entrants to fill gaps left by expiring supply contracts. The importance of the THE hub price in gas supplies is likely to rise.

The German Federal Network Agency (BNetzA) announced the completion of the gas network development plan 2020-2030 (NEP Gas), with the utilisation of a change request focusing on planned LNG plants and the integration of hydrogen and green gases into the network.

Among the key announcements was that BNetzA deemed that no network expansion is necessary following the German hub merger, arguing that transport capacity to flow gas between the two market areas can be secured using market-based instruments.

German over-the-counter (OTC) traded volumes increased by 24% year on year in the fourth quarter of 2020 reaching a total of 685TWh on both hubs, according to ICIS data.

Liquidity was boosted as trading activity for annual contracts on the NCG more than doubled.

It is possible to expect that liquidity will continue to grow in 2021, benefitting from higher summer injection demand due to significantly emptier storage tanks, the hub merger set for 1 October, and the potential completion of the Nord Stream 2 and EUGAL pipelines.

German TSOs provide update on VIP plans ahead of merger