SINGAPORE (ICIS)–Current tight supply conditions in Asia’s liquid caustic soda may continue in the near term, as recent curtailed output in China has had ripple effects across the wider regional market.

Curtailed chlor-alkali output in China has driven some traders to secure last-minute spot cargoes in the previous week on a prompt-loading basis to fulfill contractual obligations.

Due to China’s dual control policy as well as a shortage of national energy reserves, market participants expect curbs on output to remain in place as the country heads into the winter season in December.

Since late September, some chlor-alkali producers in China have been asked by local authorities to lower production rates as part of the country’s dual control policy on energy consumption and intensity.

At least one chlor-alkali producer in China has been allowed to increase output after the week-long Golden Week holidays which ended on 7 October, although operating rates have been capped at 50-70% of nameplate capacity.

Global supply of caustic soda has also been crimped by recent US outages arising from Hurricane Ida.

Other northeast Asian producers from South Korea and Japan have subsequently adopted a bullish near-term outlook, as tight supply has been met with healthy demand for caustic soda, driven primarily by the downstream alumina sector.

Alumina is refined from raw bauxite ore using caustic soda, and alumina is further processed into aluminum for end-use in the construction and automotive sectors.

China is the world’s largest manufacturer of aluminum, and the same curbs on energy production have led to increased prices of the base metal globally.

Alumina refiners outside China, such as Australia and Indonesia, have subsequently sought to procure more caustic soda from Asian producers in order to maximise alumina output amid favourable netbacks.

“I am taking a bullish stance as buyers from the US West Coast and Australia are willing to buy at higher prices [than southeast Asian buyers],” said a northeast Asian producer. 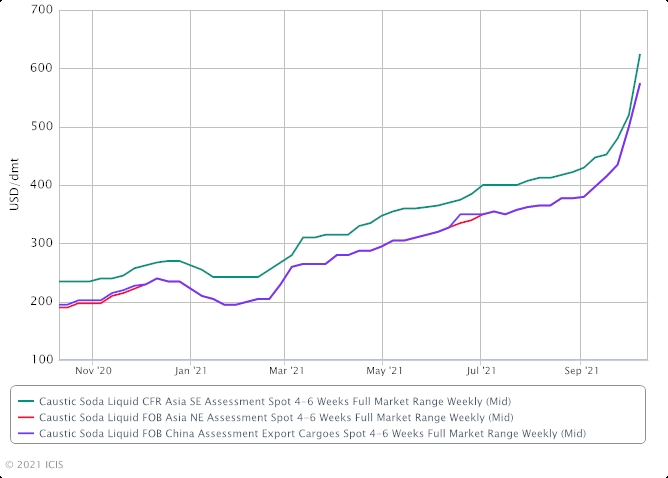