November IPEX down 2% on falling northeast Asia and US prices

LONDON (ICIS)–The ICIS Petrochemical Index (IPEX) dropped by 2% month on month in November, tracking price declines in northeast Asia and US petrochemicals and plastics markets and despite mild rises in Europe.

Northwest Europe posted the only increase, driven by rises in styrene, toluene and ethylene. Butadiene was the only petrochemical where prices were down in November in Europe.

The index for northeast Asia posted the largest decline, with some commodities such as methanol declining by up to 22% month on month. Every petrochemical in the region fell with the exception PVC, which posted an increase in pricing of 1.6%.

US Gulf values also fell in November, although the list of winners and losers was more mixed than in Asia.  Methanol, styrene, toluene and benzene prices rose by more than 5% compared with August, while butadiene, propylene, polypropylene, ethylene and polyethylene values dropped.

The Global IPEX index has risen by 34% year on year.

The monthly IPEX indices provide a snapshot of the petrochemicals and plastics markets in the three major producing and consuming regions, as well as globally. 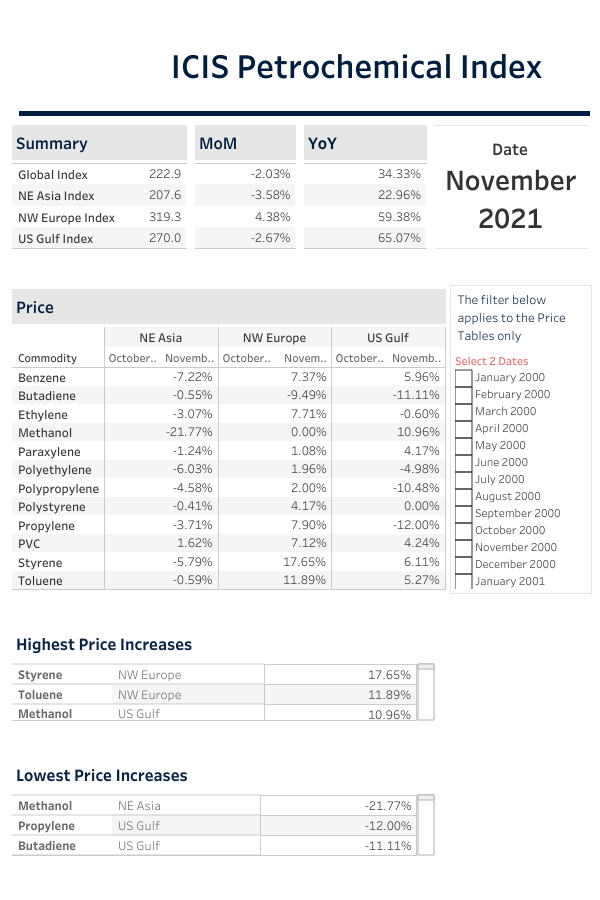 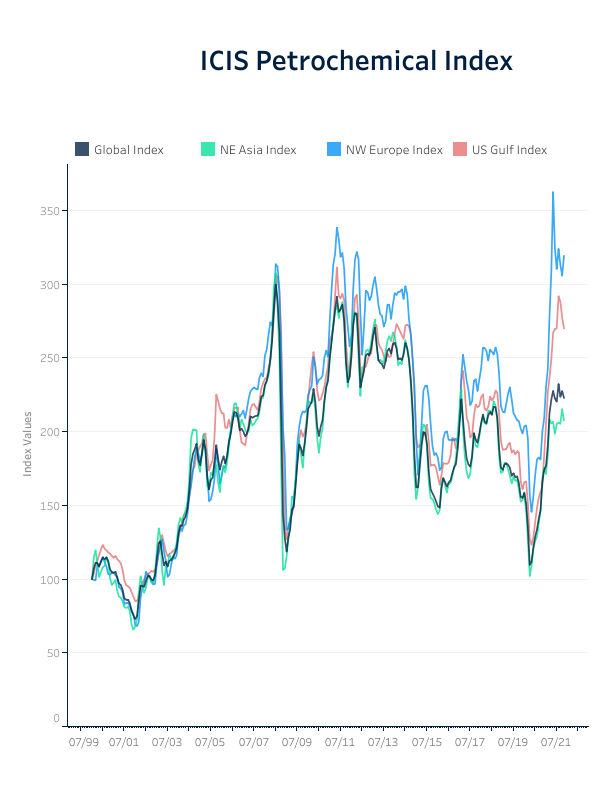 The IPEX table and charts below are ‘live’ and update on a regular basis. The latest price increases are shown and values of the regional and global IPEXes.

Price changes for the commodities used to create the IPEX can be captured by users on the price table allowing comparisons to be made on a flexible monthly basis.

Likewise, IPEX values can be captured by clicking into the chart and downloading current and historical data using the ‘download’ button and selecting an option.

The ICIS petrochemical index tracks the movement of prices for the 12 major petrochemicals and polymers: ethylene, propylene, butadiene, benzene, toluene, paraxylene (PX), polyethylene (PE), polypropylene (PP), styrene, polystyrene (PS), methanol and polyvinyl chloride (PVC) with the regional indexes weighted by capacity. The IPEX values are related to a January 2000 base of 100. IPEX values are subject to change retrospectively as monthly contract prices are settled.