LONDON (ICIS)–The supply chain woes that have dogged the European chemicals sector through the pandemic and 2021 economic rebound have taken a turn for the worse as demand-driven tightness is exacerbated by weather issues, the resurgence of coronavirus infections and the latest variant.

Crude prices and public markets crashed on 26 November following news that a new COVID-19 variant, subsequently named the Omicron strain, had been detected by South Africa’s genomic sequencing system, on the heels of a dramatic spike in cases in parts of Europe.

INFECTION SPIKES
Hungary, Austria, Belgium and the Netherlands are among the countries currently seeing over 10,000 cases per million people per day, while much of the wider European area is seeing substantial upticks in infection rates.

Slovakia, which has lower vaccination levels than many of its neighbours, has already announced a fresh full lockdown, and Austria has also moved to shut down many non-essential businesses.

While vaccination rates are much stronger than during the winter 2020 infection surge, the sheer volume of case numbers is overwhelming hospitals, pointing to the inevitability of more widespread lockdowns if the situation holds.

Analysis of previous infection surges points to less seismic lockdown impact than in the initial wave, but with the likelihood of targeted measures to be held in place for much longer, according to analysts at banking group ING, which will be likely to hit European GDP in late 2021 and into next year.

“The new COVID wave and the surge in infections adds to already existing headwinds like high energy prices and supply chain frictions. Many governments seem to have underestimated the potential of a fourth wave and insufficient vaccination ratios are currently backfiring,” said ING senior economist Bert Colijn.

SHIPPING COSTS
Increasing infection levels and fears over the imposition of stricter lockdown rules had already caused the cost of shipping to Europe to rocket even higher than the prevailing pandemic-era rates, already multiples above general pre-2020 prices. 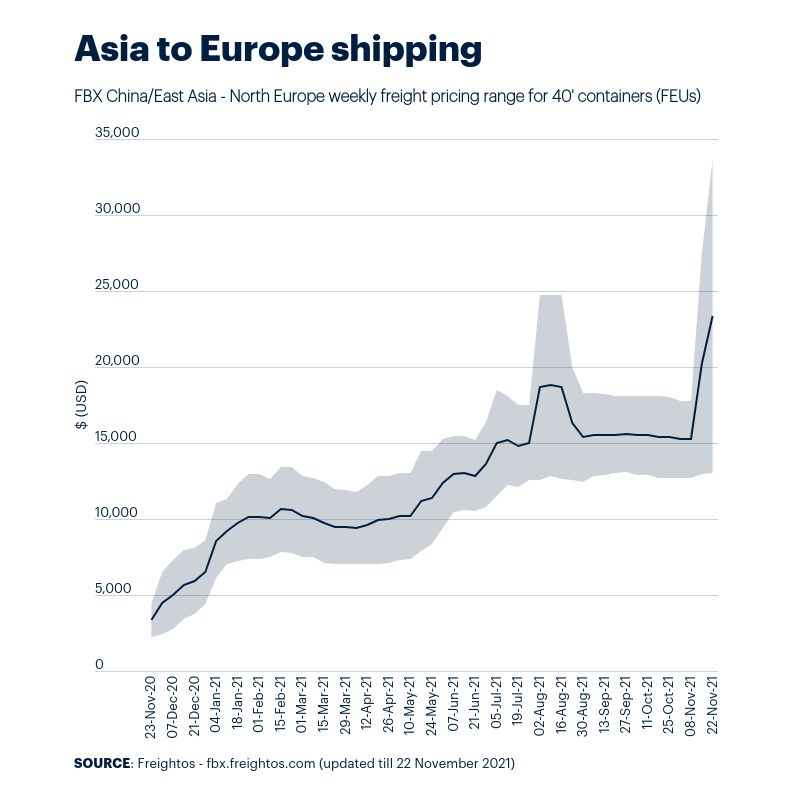 Heightened coronavirus fears are already leading to fresh lockdown measures in some countries, with the Netherlands mandating that hospitality venues close by 17:00 for several weeks, and numerous countries instituting travel bans on several countries in Africa.  Longer mandatory post-travel quarantines have also been rolled out in parts of the continent.

More stringent quarantine rules and travel bans can only serve to further exacerbate shipping sector disarray, which has been a factor of trade for nearly two years at this point due to dislocated paces of economic recovery across the globe and a shifting tapestry of lockdown and berthing requirements. 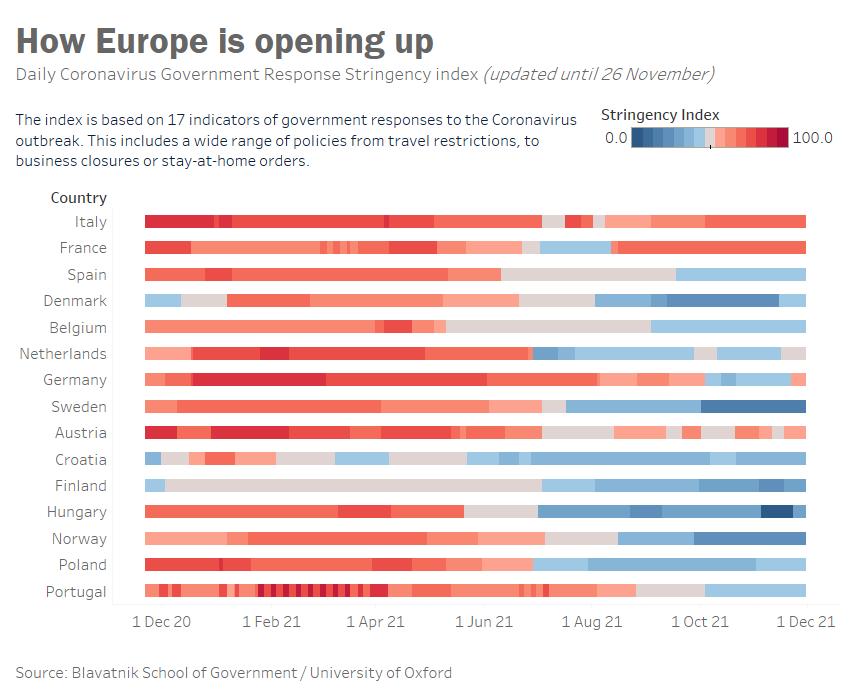 LOGISTICS
Road, sea and air transportation remains at a premium, with shortages of trucks and truck drivers causing substantial issues in the UK in particular, but perceptible elsewhere, particularly in Germany and Poland.

With a strong proportion of drivers from central and eastern Europe, deliveries even under normal circumstances tend to stop mid-December, so drivers can make their way back home for the holidays, but buyers are taking no chances this year.

The current gridlocks may be driving better-than-expected demand for the season for some players, with market sources speculating that shortages of trucks and drivers could be pushing buyers to up orders to ensure that material will arrive in time for the holidays.

Weather issues are also straining the logistics space further, with dramatic storms in parts of northern Europe over the weekend, and an unusually dry November month bringing down water levels on the River Rhine.

The lack of rainfall on the key chemicals shipping artery has pushed down recommended vessel berthing capacity to 40-60%.

“We have had to underload all through November,” said one source with operations along the river.

“The only thing to do is increase barges but there is a problem with availability too,” it added.

The automotive sector, which is the source of around a fifth of chemicals demand, continues to struggle with intermediates shortages and the chronic lack of computer chips, with UK trade data last week indicating that October car output fell to its lowest level since the 1950s, echoing the extent of the falls seen early in the pandemic.

The sector also remains one of the worst-hit in Germany, with 90% of automotive industry respondents to economics institute Ifo’s monthly survey reporting delays and difficulties in obtaining components.

Throughout the pandemic, distributor sources have reported players making multiple orders for the same parcel of material on expectations that shortages or logistics bottlenecks would prevent some of those orders getting through.

Gridlocks, high pricing and a high level of planned and unplanned outages have driven inflation to levels not seen in years, with Germany reporting headline levels of 5.2% in November, and think tank Oxford Economics projecting another high reading in December.

“Looking ahead, we expect another high reading in December. Past that, core inflation will almost surely drop in Q1, as the VAT base effects fade bringing down non-energy goods inflation. We are less sure about how long the strength in services inflation will continue, and energy remains a wild card.,” said Oxford senior Europe economist Melanie Debono.

The approaching Christmas season is also likely to increase the premium on transportation costs, with retailers keen to meet demand for bigger-ticket items potentially driving even more feverish bidding for vessel and warehouse space.

Demand is holding strong despite the cost of inputs, with further price hikes being introduced across the manufacturing sector.

“Never before have so many companies announced they are raising their prices,” said Ifo head of surveys Klaus Wohlrabe.

It remains unclear if the latest variant will prove more transmissible than previous COVID-19 strains, or diminish vaccine efficacy, but it is likely to hit markets already spooked by the latest infection spike.