“Eastman continues to build out its sustainability footprint and its contribution to the circular economy, which will be the primary driver of the company’s future growth,” said Wells Fargo analyst Michael Sison in a research note.

The company’s sustainability initiatives cut across all segments, with its methanolysis-based plastic-to-plastic chemical recycling technology “representing a significant moat and the primary building block to support the rest of its circular economy opportunity starting in 2023”, he added.

The analyst reiterated his “overweight” rating on Eastman and boosted his price target to $138 from a previous $130.

“Based on our side conversations and obvious market reaction, the meeting was well received. The strategic direction on emphasising specialties and using its core technologies to materially expand into sustainable offerings across the platform, while focusing on shareholder remuneration was palpable,” said Frank Mitsch, analyst at Fermium Research.

PRT TO DRIVE $450M IN EBITDA
Eastman sees the potential for over $450m of earnings before interest, tax, depreciation and amortisation (EBITDA) from its “PRT (Polyester Renewal Technology) molecular recycling” projects by 2026, including two new projects in development – one in the US and one in Europe, the Middle East and Africa (EMEA).

Eastman is already investing $250m to build its first PRT facility in Kingsport, Tennessee, US, which will use around 110,000 tonnes/year of plastic waste to produce premium specialty plastics. The project should be mechanically complete by the end of 2022, according to the company. 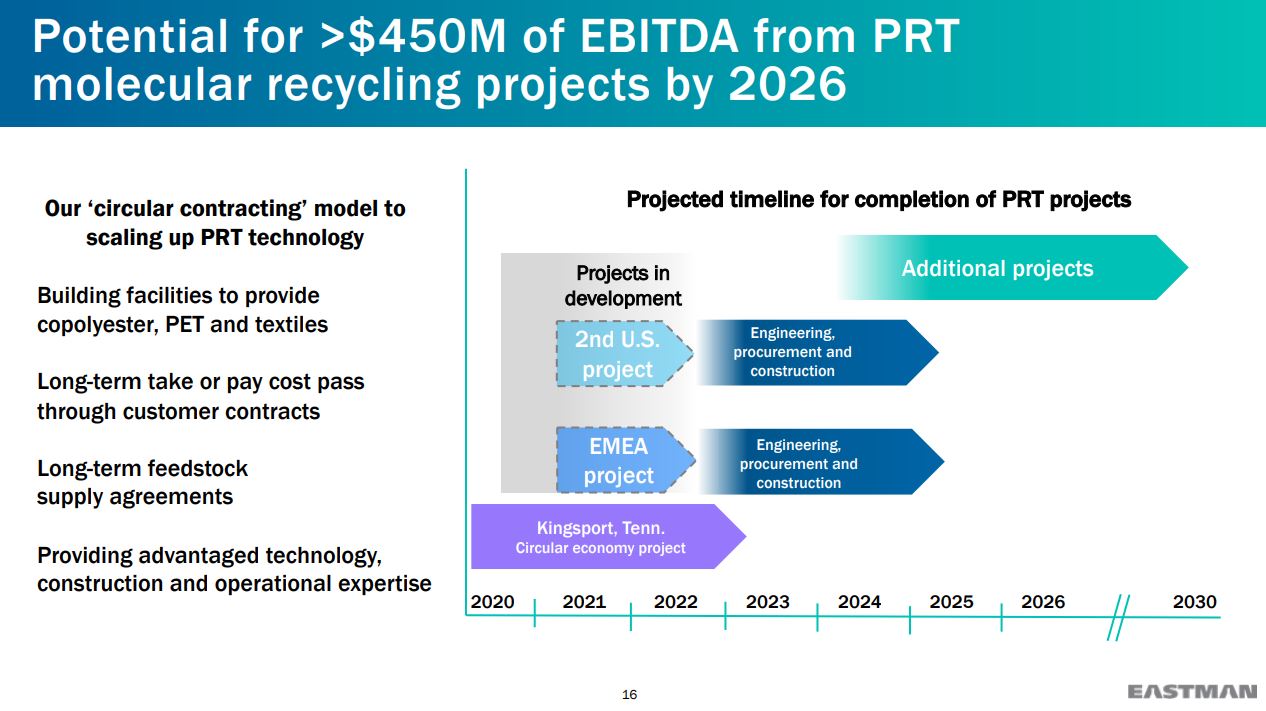 Eastman’s PRT uses depolymerisation via methanolysis to process a range of polyester plastic waste, including soft-drink bottles, carpet and clothing from landfills and incinerators, to break them down to basic monomers to create new materials. PRT makes products with 20-30% lower greenhouse gas (GHG) emissions, the company said.

“Given the significant interest globally and the lack of capacity, Eastman believes it is likely that there will be additional projects that could be rolled out in the future beyond the first two,” said Sison.

“The company plans to utilise a ‘circular contracting’ model to scale up PRT technology, which includes long-term take or pay contracts, feedstock supply agreements and [licensing] its proprietary technology and expertise to its customers,” he added.

$200M EBITDA POTENTIAL FROM CRT
Using its other key technology – CRT (Carbon Renewal Technology) which involves gasification – Eastman plans to use a wide range of plastic waste feedstock with the exception of polyvinyl chloride (PVC) to produce intermediates such as acetic anhydride.

These could then be combined with wood pulp to make end-products such as fibres for apparel, personal care additives, coatings and film materials, eyewear, utensils and food packaging with around 60% bio-content, and 40% recycled plastic waste content, and with 20-50% lower GHG emissions.

The company sees CRT initiatives potentially generating over $200m in EBITDA by 2027. 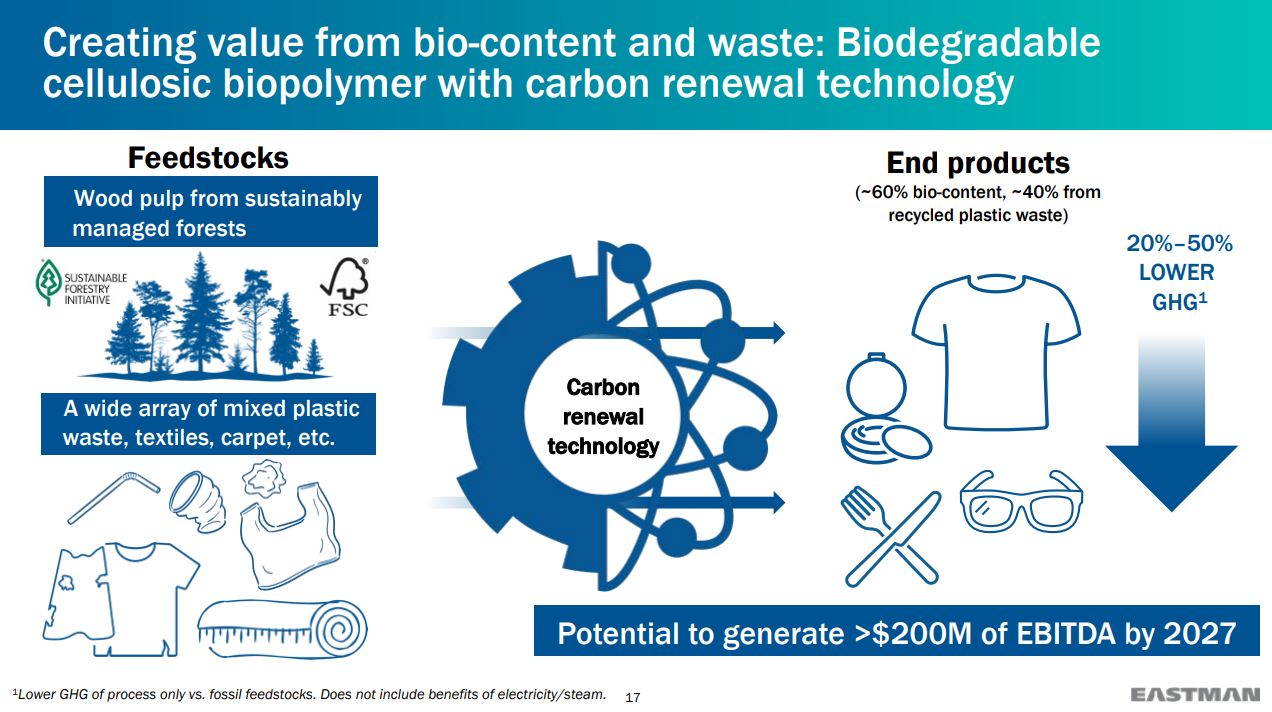 Eastman is building an 80,000 tonne/year Tritan copolyester project in Kingsport, Tennessee costing around $175m. The plant is expected to produce commercial quantities in 2023. Earlier in June 2020, the company introduced Tritan Renew copolyester, which incorporates up to 50% recycled plastics content.

Fermium’s Mitsch estimates this would add over 33% to existing Tritan capacity.

“The company also implied a further acceleration in 2025-2030, with a mid-decade ramp in molecular recycling and biodegradable recycled cellulosic polymers adding around $3.40 to EPS by 2027 (around 40% of 2021 EPS),” noted Laurence Alexander, analyst with Jefferies.

“As these platforms advance, we expect Eastman’s relative multiple to expand to closer to its specialty chemical peers,” he added.