Container rates to US pressured higher amid Russia attack on Ukraine, soaring crude

HOUSTON (ICIS)–Spiking crude oil prices and increased concern over the Russian invasion of Ukraine are keeping upward pressure on shipping containers from east Asia and China to the US.

Average weekly rates to both US coasts ticked higher this week, according to online freight shipping marketplace and platform provider Freightos. 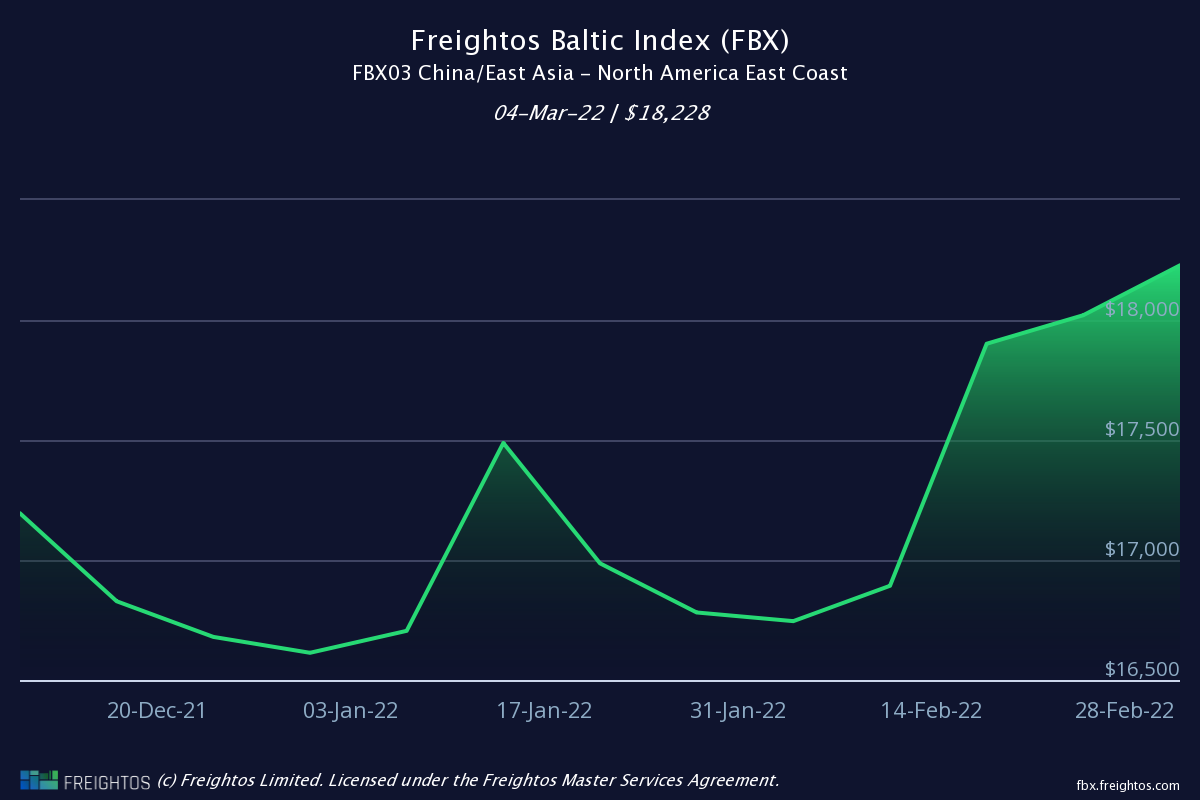 Shipping companies Maersk and MSC have ceased calling on Ukraine and Russian ports and accepting orders from the countries, which has led to some additional logistical constraints including adding to congestion in some European ports, but surging bunker fuel prices are likely to have a greater impact on shipping costs.

For example, very low sulphur fuel oil (VLSFO) prices at the US Gulf’s Port Houston have risen by more than 41% from 1 January and have risen by the same amount at the at the port of Rotterdam.

MSC warned customers this week that it will implement a global fuel surcharge for all shipments from Asia to the US, effective 1 April, and a quarterly bunker recovery charge for shipping containers along the same route.

Judah Levine, head of research at Freightos, said carriers who continue to service ports in the region may introduce war risk surcharges, which in recent years have meant an additional $40-$50 per 20-foot equivalent unit (TEU) for shippers.

Levine noted that up to 10,000 TEU containers traverse across Russia by rail from Asia to Europe weekly.

“If sanctions or fear of disruption shifts significant numbers of containers from rail to ocean, this new demand would also put upward pressure on rates as more shippers compete for already scarce capacity,” Levine said.

Maersk, which has been expanding its logistical offerings via rail and air in an effort to be a complete logistics provider, said it has suspended both eastbound and westbound rail bookings between Asia and Europe until further notice.

Maersk has also suspended all new air bookings to and from Russia and Ukraine in expectation of increased costs as airspace becomes restricted and flights become subject to rising fuel and insurance costs.

PORT CONGESTION
Efforts continue to ease the congestion at US ports, which have been at the centre of the supply chain constraints experienced since economies reopened after lockdown measures to help stop the spread of the coronavirus.

The backlog of vessels at the Pacific coast ports of Los Angeles and Long Beach continues to tick lower, according to the Marine Exchange of Southern California (MESC).

As of Thursday 3 March, there were 59 container ships backed up at the ports, with four at anchor and 55 vessels slow-speed streaming or loitering outside the Safety and Air Quality Area (SAQA).

That is down from the record since the start of the new queuing system of 109 on 9 January and three fewer than a week ago.

The market is watching congestion at Atlantic coast ports, which has risen as some shippers chose alternative ports to avoid the congestion on the west coast.