Fertilizer prices to stay over $1,000/tonne on gas and Ukraine, NA producers to benefit – Moody’s

LONDON (ICIS)–Fertilizer prices are likely to remain over the $1,000/tonne level well into 2023 on the back of high natural gas prices and lower exports from Russia and Belarus, according to credit ratings agency Moody’s.

The new high-price environment for fertilizers is likely to have a different effect on the various global producers, however. In North America (NA), fertilizer companies are expected to benefit from the country’s vast supply of natural gas, which will keep a lid in input costs.

In Europe, however, those costs will be higher and some producers have already curtailed ammonia production, for which natural gas is the key raw material.

The record highs posted in 2021 by many fertilizers were expected to normalise during 2022, as in many other crude  and natural gas-dependent petrochemicals industries, but Russia’s invasion of Ukraine in February has put further pressure on prices.

The war in Ukraine is likely to cause “significant increases” in fertilizer selling prices as well as increased international demand as supply from Russia and Belarus, key global producers, is reduced.

In response to sanctions imposed on Russia, President Vladimir Putin has imposed a ban in fertilizer exports until at least the end of 2022.

Once again, North American players – in both the fertilizer and chemical industries – will have an advantage.

“Russia’s invasion of Ukraine will have a limited direct effect on North American chemical producers because neither country accounts for more than 1% of most producers’ revenues, assets and raw materials,” said Moody’s.

“But higher oil and energy prices and the loss of Russian exports will increase commodity prices, exacerbating the inflationary environment and straining certain supply chains. This combination of factors will reduce margins for specialty [chemicals] companies and most companies’ European operations.”

Moody’s said only prices for potash and diammonium phosphate (DAP) will go below the $1,000/tonne mark by the end of 2023, in a US Gulf NOLA basis, and ammonia will start 2024 above that level. 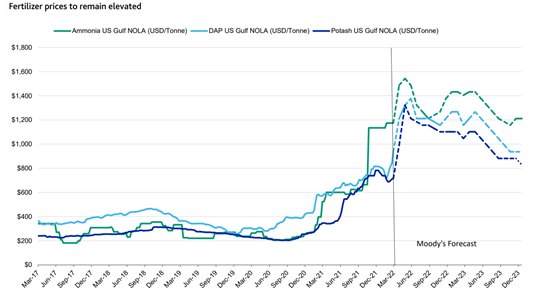 –
In addition, Moody’s said sulphur prices are also likely to remain high as Russia accounts for a significant amount of global production, trailing only China and the US.

This, in turn, will increase prices for derivative sulphuric acid which is used in several downstream manufacturing sectors as a feedstock.